Making this list of classic 1990s children’s books was an unusual exercise for me because it is the first list in my classic book series in which there is not a single book that I read when I was a kid. In fact, all of these books I read after the age of 30. However, the fact that a 30-something can enjoy a bunch of kid books says a lot about their potential for enduring appeal, even though one might argue that it is a bit of a stretch to call a book published as recently as 1999, “classic”. 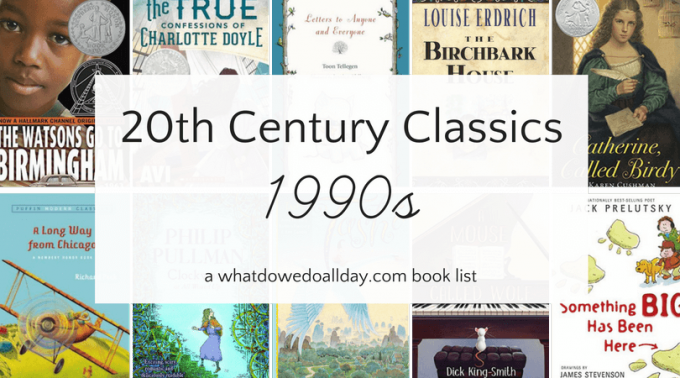 The elephant in the virtual room for any list of 1990s children’s books is, of course, Harry Potter and the Philosopher's Stone (1997), which is not on this book list. If you haven’t heard of that book, I just don’t know where you’ve been living for the last 20 years. Although I can’t guarantee all of these books are going to be new to you, I can guarantee they are all less famous than Harry. (Note: book titles and covers are affiliate links.)

The Birchbark House. (1999) Do your kids like books about pioneer life? They will love Louise Eldrich’s story of 7 year old “Little Frog”, a girl living with the Ojibwa tribe in the 19th century near Lake Superior. Fascinating details about Native American life and appealing characters should keep this book on reading lists for decades. Be sure to read all the books in the series!

Clockwork. (1995) Phillip Pullman is best known as the bestselling author of the His Dark Materials books (The Golden Compass, The Subtle Knife, The Amber Spyglass), but try out this short, illustrated work. The strange, somewhat creepy and very suspenseful, twisted meta-narrative fairytale will be best appreciated by older children. I am finding it very difficult to sum up the plot in a sentence or two! When the clockmaker, Karl, admits he has yet to finish his current project, Fritz, tells a story and things in the town begin to wind up and wind down.

The Watsons Go to Birmingham--1963 by Christopher Paul Curtis. (1995) is a tender and very funny portrait of a loving African-American family living in Flint, Michigan. Young Kenny’s parents decide to drive the family down to Birmingham where older brother Byron will spend the summer with grandma in an attempt to correct his delinquent behavior. Most of the action takes place before the family goes to Birmingham and despite the serious undercurrent of the book, there are many moments of this book which are laugh-out-loud funny. Highly recommended and very enjoyable.

A Long Way From Chicago by Richard Peck. (1998) In depression-era Illinois, Joey and his younger sister Mary Alice spend 9 summers with their formidable, yet lovable Grandma. Each chapter is a self-contained story of one hilarious summer-time adventure and are perfect for family read alouds. Even though this book was written in 1998, it reads like an old-fashioned children’s novel. There are three book about the same family, this one was given a Newbery Honor. The third, A Year Down Yonder was awarded the Newbery Medal in 2001.

Letters to Anyone and Everyone. (1996) I first encountered Dutch author, Toon Tellegen, when I picked up a copy of The Squirrel's Birthday and Other Parties (1995). In Letters to Anyone and Everyone, various animals write letters to each other (and to the sun!) which the wind delivers. Delicately charming illustrations accompany the letters in which the animals discuss their dreams and plans. Simply lovely and perfect to read aloud to younger children. (Note: I am not entirely sure that these English translations of Tellegen’s work exactly correspond to the original Dutch editions. They may be collections of stories that were published separately. These publishing dates are based on the original Dutch editions. The English translations were published as late as 2010.)

Something Big Has Been Here. (1990) My choice of this particular Jack Prelutsky book is rather arbitrary because you could pick up any of U.S. Children's Poet Laureate Prelutsky’s poetry collections (and there are many) and be immediately and totally charmed. Prelutsky has a real talent for creating irresistible, magically hilarious and sometimes outrageously ridiculous poems with terrific kid appeal. If your child resists poetry or needs something to memorize, introduce him or her to Prelutsky.

A Mouse Called Wolf. (1997) On this blog I have frequently recommended the books of prolific author Dick King-Smith. His books are excellent choices for kids reading and listening to chapter books for the first time. He is best known book is Babe: The Gallant Pig and The Water Horse but A Mouse Called Wolf is another book with enduring appeal. A young mouse named after Wolfgang Amadeus Mozart uses his talent for singing to entertain and help others.

Catherine, Called Birdy by Karen Cushman. (1994) In the 13th century, 14-year-old Catherine, the daughter of a landed knight, has a little more gumption than a girl in her times is supposed to have. Her father is trying to marry her off to enrich his coffers but she would rather run around with the peasants on the manor and thwart his efforts. This short novel is told in a diary format and does not sugar-coat life in Medieval England.

Tashi by Anne Fienberg. (1995) This popular Australian series can be enjoyed as an early chapter book or read aloud. Young Jack tells his parents marvelous tales about his imaginary gnome-like friend, Tashi, who has impressive and fantastical adventures like outwitting a dragon and flying through the skies on a swan.

The True Confessions of Charlotte Doyle by Avi. (1990) I confess (no pun intended), this is the first and only book I have read by Avi (I know! How did that happen?) and I just finished it. I was utterly transfixed and recommend it for lovers of historical fiction. Set in 1832, this Newbery Honor book tells the story of Charlotte, who sets out on a sea voyage from England to Rhode Island. Instead of being chaperoned by other families on the journey, she unexpectedly finds herself alone with the crew and becomes entangled in a nail-biting and dangerous adventure.

Frankly, the 1990s feel like yesterday. This, my friends, is the last list in my 20th century classics series. Are you a little sad? I am. In the beginning I was unsure whether I would end with the 90s or the 2000s, but this seems like a good stopping point. Making these lists was a lot of work and involved a lot of reading. It was worth it, though, and I hope you enjoyed them.

Don't Forget! All my books lists are collected in one place on my Kids' Book List page.

Be sure to subscribe to our newsletter and get updates on all our fresh new Monday book lists!

Subscribe to our newsletter and as a thank you, receive 10 waiting games kids can play anytime anywhere.
Your email will *never* be shared or sold to a 3rd party. Click here to view our privacy policy.
« Classic Children's Books By The Decade: 1980s
Picture Books about Lying and Telling the Truth »
1425 shares