Raise your hand if you grew up reading children's books from the 1980s!

The 1980s were like a totally awesome decade, dude.

I'm really happy with this list of 20th century classic children's books from the 1980s even though using the term "classic" is becoming more and more suspect as we close in on the 21st century. I included a mix of lesser known 1980s books plus a handful of classics you may have heard of, but may not yet have read. 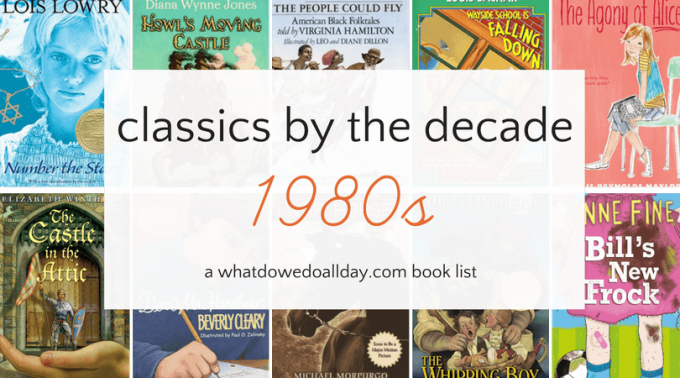 I'm also pleased that I was able to curate a book list with a few classic books that are quite suitable for younger audiences, both in  reading level and subject matter. I do think there is something for everyone on this list! (Note: book covers and titles are affiliate links.)

The People Could Fly: American Black Folktales. (1985) I like finding short story collections to include on these lists. Celebrated children’s author Virginia Hamilton put together this wonderful collection of Black American Folktales. There are several categories of tales ranging from animal trickster tales, tales of the supernatural and slave tales of freedom. At the end of each short story, Hamilton includes her notes on the origin of the tale and its dialect.

Dear Mr. Henshaw by Beverly Cleary. (1983) I’m embarrassed to say that when I was a kid I did not read this book because it suffered from what I considered to be a very boring title. My loss! Through letters and diary entries addressed to his favorite author, Leigh Botts works through his feelings about his parents’ divorce, making friends at a new school and the mysterious lunch thief. One of the most appealing aspects of this book is that Cleary realistically conveys the complex and urgent voice of an 11 year old boy.  Epistolary novels for children are rare and this one is eminently readable.

Wayside School Is Falling Down by Louis Sachar. (1989) From the gifted author of Holes, this is a crowd pleasing, witty book that you should not pass over. There are 30 stories for the 30 floors of wacky Wayside School. Each chapter is a self-contained, clever joke. Both kids who love the silly and ridiculous, and parents who appreciate well-written, humorous books will find something to charm them. This is the second book in the series.

Number the Stars. (1989) A compelling and moving novel by Lois Lowry, set during World War II.  Finding age appropriate books about tough subjects is a boon to parents and educators. In 1943 Denmark, 10 year old Annemarie and her family risk their lives to help their Jewish friends escape the Nazis.

Howl's Moving Castle. (1986) The late Diana Wynne Jones wrote loads of fantasy novels and you might recognize the title of this one because it was made into a successful animated movie. However, it’s such a captivating book, don’t limit yourself to the also-excellent film version. Young Sophie is transformed into an old woman by The Witch of Waste and the only way to break the spell is to seek out the Wizard Howl in his bizarre moving castle.

The Whipping Boyby Sid Fleishman. (1987) The great thing about The Whipping Boy is that it is a Newbery winner that is very readable for those kids reading early chapter books. In this amusing and fast-paced adventure, Jemmy serves as the palace whipping boy, receiving the punishments meant for a spoiled, bratty prince. When Prince Brat decides to run away, Jemmy follows and the two are captured by villains who are fooled into thinking Jemmy is the real prince. In their attempt to escape the villains, both both boys learn much about each other.

The Castle in the Attic by Elizabeth Winthrop. (1985)  As a child, I adored this book about a miniature castle coming to life.  William’s housekeeper, Mrs. Phillips gives him a model castle set but things go awry when Mrs. Phillips is shrunk down to the size of the castle and William must shrink himself down to rescue her. Dragons, wizards, magic forests and knights make this a wonderful fantasy quest kids will love.

The Agony of Alice by Phyllis Reynolds Naylor. (1985) This is the first book in the lengthy Alice series and is a wonderful book for tween girls (and boys, too!) learning to navigate the treacherous waters that lead to adulthood. Motherless Alice is surrounded by males at home and wants a female role model. She hopes a glamorous teacher will fill the position. What she learns instead is that people are much more than their surface appearances. In this first book Alice is a sixth grader but she grows up during the course of the series (more than 20 books). You may recognize Naylor as the author of Shiloh.

Bill's New Frock. (1989) I confess I am a sucker for books that get kids thinking about gender roles this 1980s book by British Children’s Laureate, Anne Fine, does just that. Bill wakes up one morning to find he has turned into a girl. Being a young boy, he is naturally horrified! But Bill learns a thing or two about the way others treat him differently when they see a girl instead of a boy in front of them. This early chapter book will get kids thinking as well as make them laugh out loud.

War Horse by Michael Morpurgo. (1982) For kids ages 8 and up who like historical fiction this is a really interesting and moving book about a boy named Albert whose horse, Joey, is taken into service during World War I. While Joey experiences the horrors of war, Albert enlists in order to find his beloved horse. In case you haven’t figured it out, this book has a strong anti-war message. I think it would make a great family read aloud.

What are your favorite classic 1980s books for children? 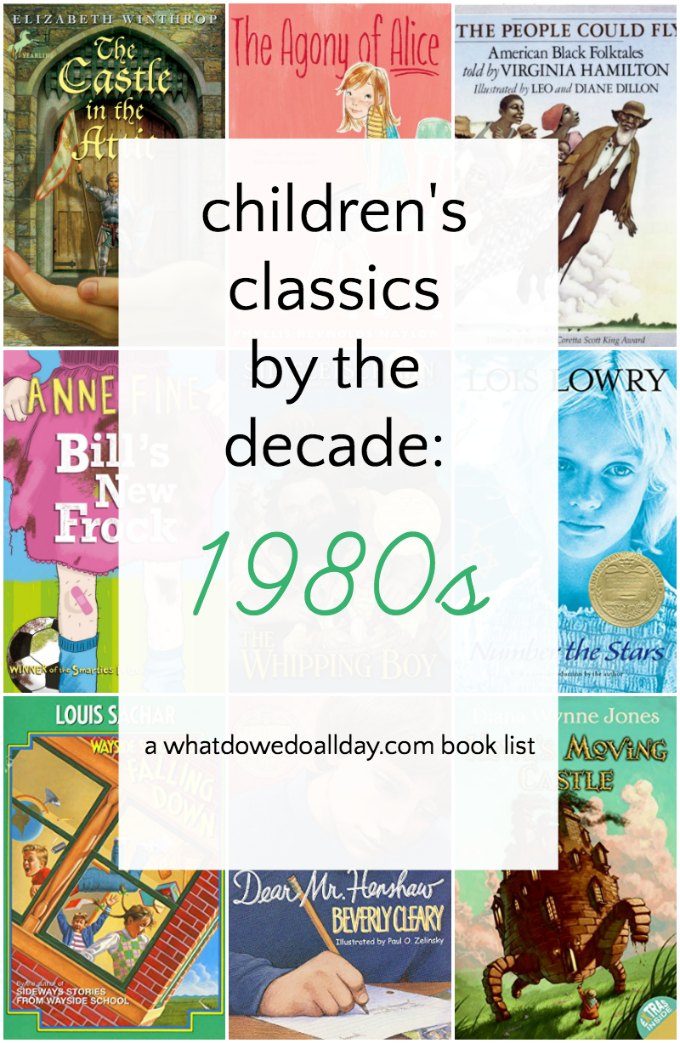