×
You are here: Home / Books / 19th C. Classic Children's Books You Might Have Overlooked
4055 shares

Many parents want to read what they consider to be "Classic Children's Books."  These 19th century children's books are certainly classic! It is rather difficult to make a list of 19th century books that you haven't heard of. After all, there are only so many 100+ year old books that are still worth reading to your children! That said, I have left off the major contenders. So, I've created a list of 10 books from the 1800s which go beyond well-known names like Alice, Jo March or Tom Sawyer and Huck. 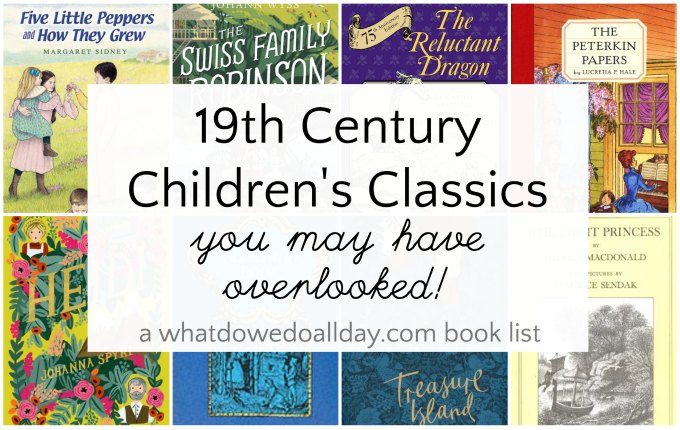 It's likely that most children (and parents, too) will find the syntax and vocabulary of older books a little more challenging than their contemporary counterparts. Here are a few tips to help you get over that hurdle:

Heidi by Johanna Spyri. (1880) Five-year-old Heidi is sent to live with her hermit grandfather in the Swiss Alps. She charms everyone, of course. I loved this book when I was a kid. It is completely responsible for my life-long romanticization of melted cheese for dinner.

The Peterkin Papers by Lucretia P. Hale. (1880) The amusing adventures and foibles of the rather foolish, but lovable New England family. Most of the chapters read like discreet stories and will provide a nice chuckle for you and your kids before bedtime.

The Blue Fairy Book by Andrew Lang. (1889) This is a 19th century classic collection of old-fashioned fairy tales. Some will be very familiar, some will be new to you. For your reading enjoyment there are other "color" fairy books, too!

Five Little Peppers and How They Grew by Margaret Sidney. (1881) The adventures of an impoverished family with lots of children who go to live with a rich family. There are a lot of lessons about hard work and honesty. I remember reading a battered copy from the 1930s when I was a kid. If you enjoy this one, Sidney wrote a number of books about the family.

The Reluctant Dragon by Kenneth Grahame (1898). Most people know Grahame's other book, The Wind in the Willows, but this short novel is also charming. A boy befriends a poetry loving dragon in the caves near his village. When the rest of the villagers learns of the dragon, they assume he is a threat and enlist St. George to rid them of the beast. Instead the boy, dragon and St. George successfully conspire to bring everyone together and show the villagers that their prejudice is misplaced

Treasure Island by Robert Louis Stevenson. (1883) It is safe to say that the characters in this book are not all virtuous, hard working and self-sacrificing, but it is loads of fun. Youngster Jim goes to look for treasure and gets mixed-up with pirates like the ruthless Long John Silver.

The Swiss Family Robinson by Johann D. Wyss. (1812) Wyss's book has the distinction of being the earliest book on this list. A family is stranded on a deserted island (fortunately with an entire ship's worth of goods, so they can kit out their tree house in style) and must learn to cope with their new surroundings. There is a lot in here to keep nature lovers interested, and a fun read in tandem with watching the beloved Disney movie.

The Light Princess by George MacDonald. (1864)  MacDonald was a Scottish author who is less well known on this side of the Atlantic.There were a lot of choices for a MacDonald book, I chose this one because you can get an edition illustrated by the beloved Maurice Sendak. A Princess, cursed at birth to have no gravity, spends her days floating until she discovers that her gravity returns only when she is in the water. Try The Princess and the Goblin or The Golden Key next.

The Jungle Book by Rudyard Kipling. (1894) Kipling's work is a collection of original fables inspired by the author's childhood in India. Each chapter is its own exciting adventure. The stories make marvelous read alouds. Kipling also wrote The Second Jungle Book, which has more Mowgli (the boy who was raised by wolves) stories than the first. The version I've linked to has fun illustrations and great 3D interactive elements like spinners and fold-out maps.

The Mysterious Island by Jules Verne. (1874) I had a difficult time choosing the Verne book to include. All are very exciting, suspenseful adventures. I chose The Mysterious Island mainly because it is lesser known than Twenty Thousand Leagues Under the Sea (it's also a sequel of sorts to this novel) and Around the World in Eighty Days. A gang of characters escape from a Civil War prison via hot air balloon and find themselves stranded on an island where strange things happen. Science fiction fans will love it. Note that the movie of 20,000 Leagues Under the Sea contains scenes from The Mysterious Island.

Have you read any of these books with your children? What are your favorites from the 19th century? 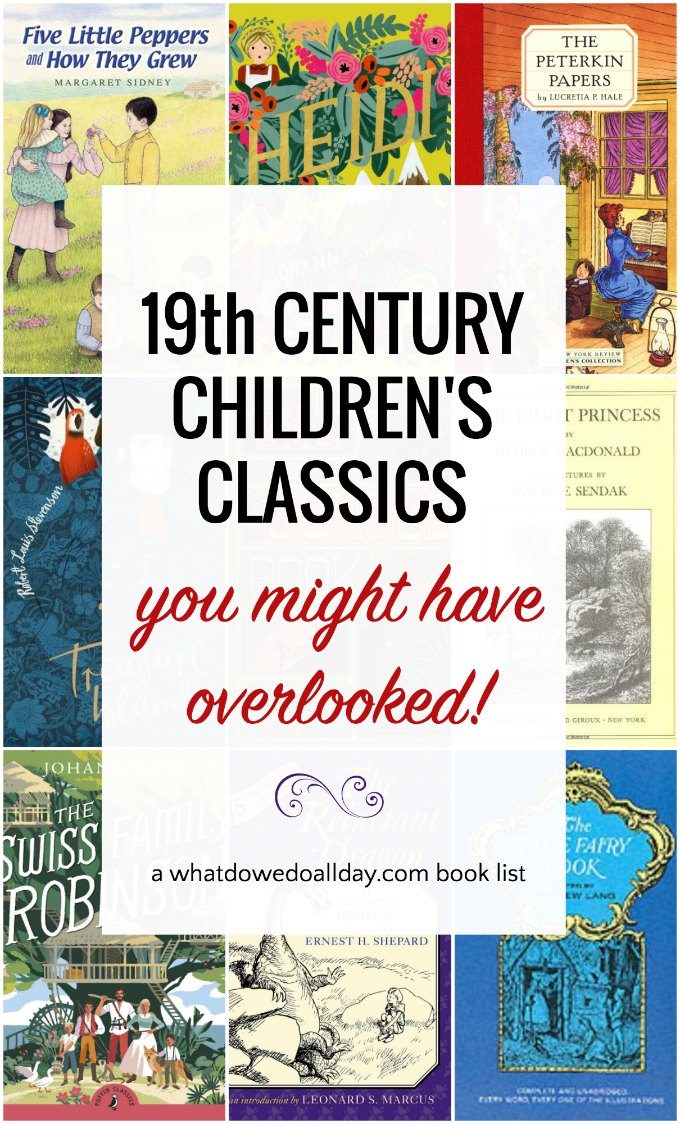 « Picture Books You Need to Read this Summer
Classic Children's Books By The Decade: 1900s »
4055 shares