These classic 1950s books will lead us into the second half of the twentieth century. Some of the 1950s children's chapter books on this list were favorite read alouds in our house and I've included a variety of genres, from fantasy to humor and realistic fiction. Also on the list, I have books from both American and European authors, so there is something for everyone! 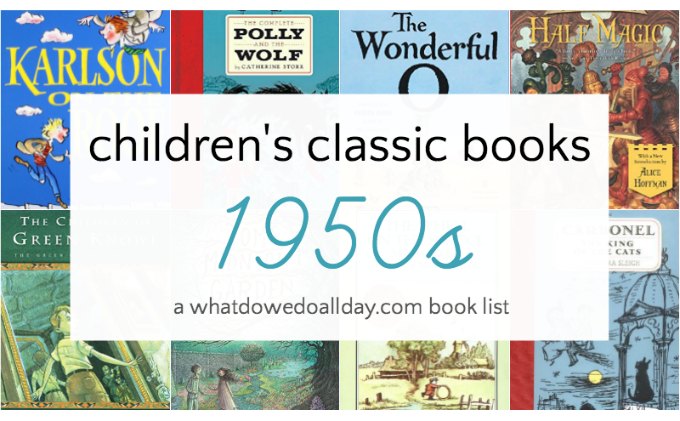 As with my other 20th century classic children's book lists,  I bumped a few famous titles (Charlotte's Web, anyone?) off the list to make room for a few new classic 1950s books that may be less well known, but just as worthy of a space on your bookshelf. After all, why populate the web with yet another repetitive "best books list" (useful as they are)? (Note: book covers and titles are affiliate links.)

The Family Under the Bridge by Natalie Savage Carlson. (1958) At Christmas time in Paris, Armand, a self-proclaimed hobo who loves his responsibility-free life, takes a homeless family under his protection. In doing so he decides it might not be so bad to have permanent ties after all. Read this sensitive, touching story with your children during the holiday season.

The Children of Green Knowe by L.M. Boston. (1954) Tolly goes to live with his grandparents in their ancient but magical English manor house. He meets a few new playmates to keep him company. He discovers, however, they are not quite of this world. There are six Green Knowe books. Read them all.

Half Magic by Edward Eager. (1954) This classic series should be read by everyone. A group of siblings discover a coin that grants only half a wish. The children must work together to make complete wishes and then navigate the unexpected outcomes. Delightful.

The Wonderful O by James Thurber. (1957) If you are an island with the name Ooroo, you'd better hope that a nasty pirate doesn't land on you and banish the letter "O" because when he d_es, y_u w_n't be able t_ st_p the hilari_us cha_s. This book will be thoroughly appreciated by grown-ups, so put it on your read aloud list.

Tom's Midnight Garden by Phillipa Pearce. (1958) In the 1950s, Tom goes to live with his uncle and aunt where a clock strikes 13, there is a gorgeous but mysterious garden and his playmate is from the 19th Century. Beautiful, eerie, moving and wondrous.

Clever Polly and the Stupid Wolf by Catherine Storr. (1955) We love this book, we've read it aloud multiple times! As you might guess from the title, Polly readily outwits a not-so-shrewd wolf who would like nothing better than to eat her for dinner. Storr's storytelling ability is just as clever and witty as her heroine. A great read aloud for younger listeners.

Karlson on the Roof by Astrid Lindgren. (1955) The author of Pippi Longstocking also wrote several amusing and charming books about a little man who flies around with a propeller attached to his back. Karlson is a little bit of a trouble-maker, but he is lots of fun.

The Wheel on the School by Meindert DeJong. (1954) In Holland, Lina and her friends wonder why there are no longer any storks in their village. They work together to build a nest for the birds on the school, and in doing so discover their individual and collective strengths. I know that sounds boring, but I swear, it's not! A Newbery Medal book with delightful illustrations by the late great Maurice Sendak.

Carbonel: The King of Cats by Barbara Sleigh. (1955) This is the first book in a magical trilogy. Young Rosemary's new cat turns out to be royalty and she and her friend, Jack, get caught up in an adventure and mystery in their quest to break the witch's spell.

The Hundred and One Dalmatians by Dodie Smith. (1956) Yes, it's true! It was a book! And it's much better than the movie! And, if you can believe it, it was written by the same author as the beautiful I Capture the Castle. Beware of abridged versions. 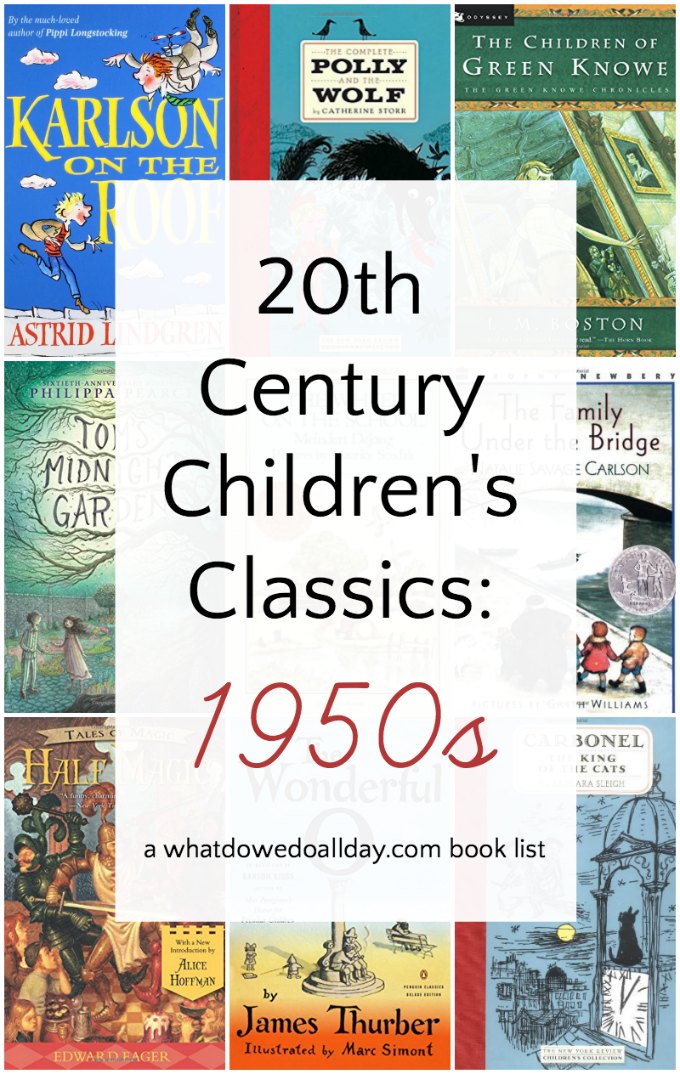 Subscribe to our newsletter and as a thank you, receive 10 waiting games kids can play anytime anywhere.
Your email will *never* be shared or sold to a 3rd party. Click here to view our privacy policy.
« Classic Children's Books By The Decade: 1940s
Nonfiction Books about Inventions and Inventors »
1794 shares