Does your middle grade reader love fantasy? Magical worlds, fantastic beasts, mythical creatures, bizarre dimensions. This list of diverse middle grade fantasy books will keep them up all night reading! What you will really love about this list is that a number of the fantasy novels draw upon multicultural mythologies. Kids who loved Rick Riordan's Percy Jackson and his Roman, Norse and Egyptian myth-inspired middle grade series, can now discover the wonder of Bengali, Hindu, Hatian, and Mayan folklore! 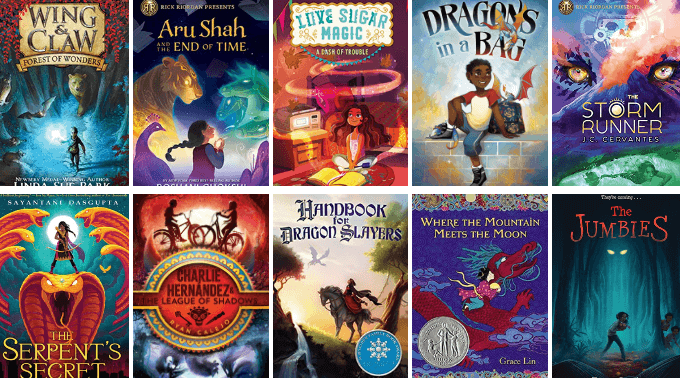 Middle grade books are generally for ages 8 and up, but if you have a younger reader you may decide these books are more appropriate for ages 9 or 10 and up. If your child reads Percy Jackson, most of these books are comparable.

Amari and the Night Brothers by B.B. Alston. Amari's brother Quinton is missing, but Amari insists that he is still alive. One day there is a mysterious visitor on her doorstep who delivers a package that reveals Quinton's secret. He is part of a Bureau of Supernatural Affairs and now Amari has a chance to find her own magic and earn a place in the Bureau. But Amari is not just an escapist fantasy, Alston deftly incorporates themes of bullying, prejudice and inequality.

Aru Shah and the End of Time (Pandava series) by Roshani Chockshi. My kids loved this adventure book and I love that the tale relies on Hindu mythology to take them on a fantastical journey. Aru has a tendency to stretch the truth, and while she is spending the school holiday at Museum of Ancient Indian Art and Culture (her mother is an archeologist), her classmates dare her to prove her claim that the Lamp of Bharata is cursed. But what happens next involves frozen classmates, the Hindu epic poem, the Mahabharata, a demon and the Kingdom of Death! Your kids will be counting down the days until they can read the sequel.

Handbook for Dragon Slayers by Merrie Haskell. Aspiring author Princess Tilda is an independent-minded princess who has never even considered slaying dragons because of her disfigured foot. However, her cousin, Ivo, wishes to steal her kingdom and she ends up fleeing her kingdom.  The ensuing adventure involves magic, capture, a menacing Blue-beard character, and (of course) dragon slaying.

The Storm Runner (series) by J.C. Cervantes. Rick Riordan Presents is a new publishers imprint that publishes fantasies based on multicultural mythology written by authors other than Riordan. (See above, Aru Shah, is also part of RRP.) In The Storm Runner, Mayan mythology is front and center.  Thirteen year old Zane learns that the volcano in his New Mexico backyard is a actually a prison for a Mayan god. When Brooks, a mysterious shape-shifting girl shows up to help Zane fulfill his destiny, the adventure begins.

Charlie Hernández & the League of Shadows by Ryan Calejo. Charlie spent his childhood listening to his abuela's tales of Hispanic mythology. One day, in middle school Charlie experiences a strange transformation which suggests those tales weren't myths after all. He is thrown into a world which is both familiar and bizarre, and with the help of his friend, Violet, Charlie follows clues from a map in his mother's locket that takes him on a hair-raising adventure. Charlie switches fluently from English to Spanish, but the meaning will be perfectly clear to non-Spanish speaker and there is a helpful glossary of Hispanic mythology in the endnotes.

The Jumbies by Tracey Baptiste. I actually read the second book, The Rise of the Jumbies, without realizing it was part of a series! Baptiste draws on Haitian folklore to tell her tale. Corrine La Mer's aunt Severine is a "jumbie," a mystical creature of the forest. Severine is looking for humans to turn into jumbies and Corrine must find a way to stop her. In the second book, Corrine heads to the sea to get answers about the island's missing children from the sea jumbie.

The Serpent's Secret (Kiranmala and the Kingdom Beyond series) by Sayantani DasGupta draws upon Bengali folklore. Kiranmala, and Indian sixth-grade interdimensional demon slayer is concerned. A spell gone awry has sent her parents into another dimension and she is about to be eaten by a rakkhosh demon in her own kitchen. Thus begins a highly engaging and funny adventure in which Kiranmala rejects two princes' offer to rescue her, travels to a magical dimension full of fantastic beasts, battles demons, solves riddles and saves New Jersey.

A Dash of Trouble (Love Sugar Magic series) by Anna Meriano. In her Mexican-American family Leo Logroño has five older sisters. Convinced they are leaving her out of something important while they tend to the family bakery in their small Texan town, Leo investigates. She discovers a book, Recetas de amor, azúcar, y magia and that her sisters use magic in their baked good! Against her sister's advice, Leo decides it is time that she learn magic, too, but things don't go exactly as she hopes! A delightful fun read for kids who would like a fantasy book set in a real location.

Dragons in a Bag by Zetta Elliott. This is also an excellent choice for early middle grade readers, ages 7 and up. One day, Jaxon's mom leaves him in the care of Ma, a woman who he thinks is his grandmother but is actually a witch on a baby dragon delivery mission. Ma takes him on as her apprentice and they travel to a magical world. When they are all set to return to Brooklyn, Ma is accidentally left behind and Jaxon enlists the help of his friends to take care of the baby dragons and rescue Ma.

Where the Mountain Meets the Moon by Grace Lin. This is possibly my favorite contemporary chapter book ever and I consider it a modern classic. Minli’s family lives in poverty and Minli sets out on a quest to find the Old Man of the Moon and change her family’s destiny. Along the way she is accompanied by the Jade Dragon and her journey is filled with twist and turns of fate. Drawing on Chinese folklore, Lin deftly weaves together Minli’s quest, her father’s stories and wonderful illustrations to create a memorable tale. Don’t forget the two companion books, Starry River of the Sky and When the Sea Turns to Silver

Forest of Wonders (Wing and Claw trilogy) by Linda Sue Park. Raffa, who is a prodigy apothecary, discovers a sinister government plot to enslave the animals. Raffa, with his knowledge of apothecary and botanical magic gets caught up in a secret web that involves a family member. Suspenseful and full of moral dilemmas, kids who are looking for Wings of Fire read alikes will love this trilogy, even if it doesn't involve dragon battles.

The Black Panther: The Young Prince by Ronald L. Smith. Yes, my friends I am including a Marvel superhero licensed character book on this list. But hear me out. I have been impressed with Disney's recent efforts at recruiting talented authors to write novels for the Marvel and Star Wars franchises, and you should be too! (For example, Shannon Hale authored the Squirrel Girl novel, and Tom Angleberger wrote one of the Star Wars trilogy books.) If your child is reluctant to read longer books but enjoys a good superhero movie, try one of these novelizations!

« Creative Activity Books to Get You Through the Winter Screen-Free!
Paper Snowflake Wreath: Easy Winter Craft for Kids »
1187 shares