Every child should read Harry Potter, but not every child is ready to read the entire series in one go. I mentioned in my post about how to choose chapter books for kids that the age of the protagonist is a good general guideline for the age of the reader. Harry Potter is 11 in book one and 17 in the final book. 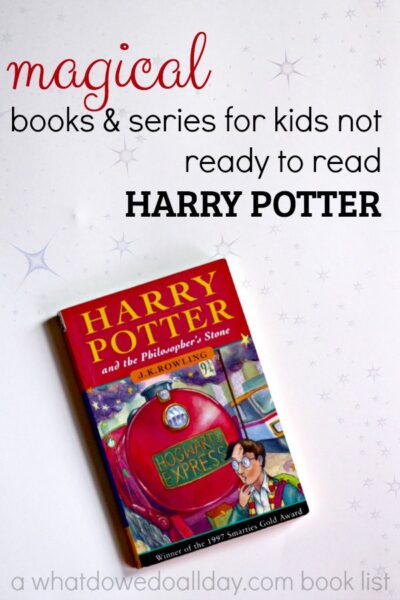 I also don’t think Harry Potter is the best read aloud for 5 year olds, which seems like the age that a lot of parents start reading the books to their kids. (Every family is different, I make no judgements!) I have chosen to let my kids discover and read the books on their own rather than read them aloud, but that’s just a personal preference. (Maybe I should write a whole post about that!) I don’t have an answer to the best age to start reading the series, that will depend on your child’s interest and tolerance for potentially scary events.

However, for kids who are not ready for many of the darker themes in Harry Potter or the reading level of the later books, this list of chapter books will come in handy.  Some of these books are good for kids not ready for the 1st Harry book and some are better for kids who can read the first three, but not beyond. All of them have a heavy dose of magic and a share a few elements with J.K. Rowling’s splendid series. (Note: book covers and titles are affiliate links.)

The Magic Half (2 books in the series — so far) is by the author of the popular Ivy + Bean series. Miri is sandwiched in between 2 sets of twins. Her family has just moved to an old house and one day after being sent to her room for inadvertently injuring one of her older brothers, she finds part of a set of old glasses. When she looks through it she is transported back in time to 1935 where she meets Molly, an orphan living with her rather sinister relatives. Miri and Molly must work together to help Molly escape “back to the future” and when they do they discover the most surprising thing of all! (I simply cannot give it away!) Molly’s cousin, Horst, reminded me of  Harry’s cousin Dudley!

Beyond the Pawpaw Trees and The Silver Nutmeg by Palmer Brown have recently returned to print. Anna Lavinia’s father left home to chase a double rainbow and left behind a mysterious silver key. Anna Lavina sets off “beyond the paw paw trees” that populate the walled garden of her home in search of her dad and the meaning behind the key. Her journey starts with a marvelous train ride which leads to a place full of wondrous inhabitants (sound familiar?). In the sequel, The Silver Nutmeg, Anna Lavinia travels to an upside-down mirror land where instead of gravity, there is “the tingle” (!). While the magic lies in the environment rather than in the protagonists, Harry Potter fans will enjoy these books that are also reminiscent of Alice and Oz.

Matter-of-Fact Magic Book Series Ruth Chew wrote about 30 books in the 70s and 80s. Several have been republished in the last year and more are currently in the works. They are closer to the reading level of an early chapter book than most of these titles so can be independent reads for ages 7 and up, or read alouds for 5 and up (again, it all depends on your child). I have only read 2 of the books in the series so far but each story is a stand alone (no character cross over — so far) and the plots revolve around normal children discovering strange happenings in their neighborhoods – like magic trees or enchanted fudge from friendly neighbors who turn out to be witches.

The Worst Witch (7 book series) Like the Harry Potter books, this series takes place at a  boarding school for magic kids. In the introductory novel, Mildred begins her first year by getting a black cat and a broom. Poor Mildred, however, is not exactly the most skillful, coordinated witch in her class and her cat is a tabby! She mixes up potions and spells causing all sorts of chaos (and fun, of course). This is fun for kids and is also at an easier reading level than the Harry Potter books.

Tuesdays at the Castle begins a 3 book series about a living castle. Every Tuesday the castle adds a new feature; it could be a room, or a turret. Celia spends her time exploring and mapping the castle. Celia’s brother is off at wizard school and when their parents travel for his graduation, the castle comes under attack. The castle aids Celia and two of her siblings as they try to keep the marauders at bay. The idea of a living castle is wonderful. I’m not sure I’ve even encountered such a conceit before (or at least I can’t think of another book that does the same) but it does rather remind one of the magic world of Hogwarts, although I’ve never thought of Hogwarts as “alive.” The story continues with Wednesdays in the Tower and Thursdays with the Crown.

A Question of Magic. I quite liked E.D. Baker’s The Frog Princess series and this stand alone novel is a retelling of the Baba Yaga legend, a magic tale often neglected in the world of contemporary literature. Like Harry, Serafina is taken by surprise when she discovers her magic identity. Serafina finds out that her great-aunt is Baba Yaga and that she has been summoned to step into her aunt’s shoes! She reluctantly takes on her new role, in which she must truthfully answer one question from a stranger and live in a house that stands on chicken legs. There’s a bit of humor from the talking skulls in her new home and also some very light romance in the form of Alek who wants to rescue her from being Baba Yaga. (Reading level: best for kids who can read HP book 1 but are not ready for the rest of the series.)

Bliss (3 book series) is at a reading level of the first few Harry Potter books, so if your kids are chomping at the bit to read HP book 4 or 5 distract them with these three books about a family with a magical cookbook. Harry Potter has his book of spells and so does the Bliss family, only all the Bliss spells are recipes for enchanted baked goods (now that does sound like bliss!). When the parents go out of town, a mysterious relative comes to visit and the children aren’t sure whether or not to trust her with their secret. After the cliff-hanger of an ending you will want to follow up with the sequels, A Dash of Magic, and Bite-Sized Magic.

The Wonderful Wizard of Oz

hardly need any introduction! These are must-read books for kids and kids can read all 14 books in a row without having to be concerned that the age appropriateness of the text will advance as it does in the Harry Potter series. All of Baum’s Oz books are in the public domain and there are some bad versions out there. Be sure to read the books with the original text and illustrations. I you like ebooks you can find them all for free at Project Gutenberg (make sure to read the copies with illustrations).

. (7 book series) This classic series should be read by everyone. A group of siblings discover a coin that grants only half a wish. The children must work together to make complete wishes and then navigate the unexpected outcomes. Delightful.

. The Magic Shop Book series reminded me of Olivander’s shop in Diagon Alley. Jeremy is not a wizard, but the eccentric shopkeeper insists he take home a mysterious box. Inside the box is an egg which hatches into a small dragon, and now Jeremy must quickly learn how to take care of it. The dragon cannot stick around forever, though, but tending him as helped Jeremy discovers new ways of navigating the perils of tween-dom. There are several books in the series, all with children who suddenly come face to face with something magical.

I recently read The Last of the Really Great Whangdoodles out loud to the kids and both boys (ages 9 and 5) absolutely loved it. Three siblings travel to a magical land with the help of their “scrappy caps” and a wise Professor. Along the way they meet some fantastical creatures, some of whom do not want them to arrive at their destination. As in HP, there is a villain who turns out to be not quite villainous after all.

Early chapter books, Stuart Goes To School and Stuart’s Cape are by the author of the popular Clementine series. When Stuart is anxious about being the new kid, his mom makes him a cape out of old neckties and it turns out to have magical properties, although things don’t always go quite the way Stuart wants! These two short books make great read alouds when your child is still much too young to listen to even the first Harry book.

More Book Lists You Will Love:

Subscribe to our newsletter and as a thank you, receive 10 waiting games kids can play anytime anywhere.
Your email will *never* be shared or sold to a 3rd party. Click here to view our privacy policy.
10500shares
« Game of the Month: Story Cubes
Handmade Journals and Books about Writing for Kids »