What is more enticing than the possibility of time travel? Time travel, whether it's a desire to experience historical moments, change bits about the past we don't like or experience the future, is an intriguing element in adventure books and science fiction. These middle grade time travel books will take your kids on a wild, imaginative ride through time, making them wonder, "Gosh darn it, why isn't time travel possible!!" 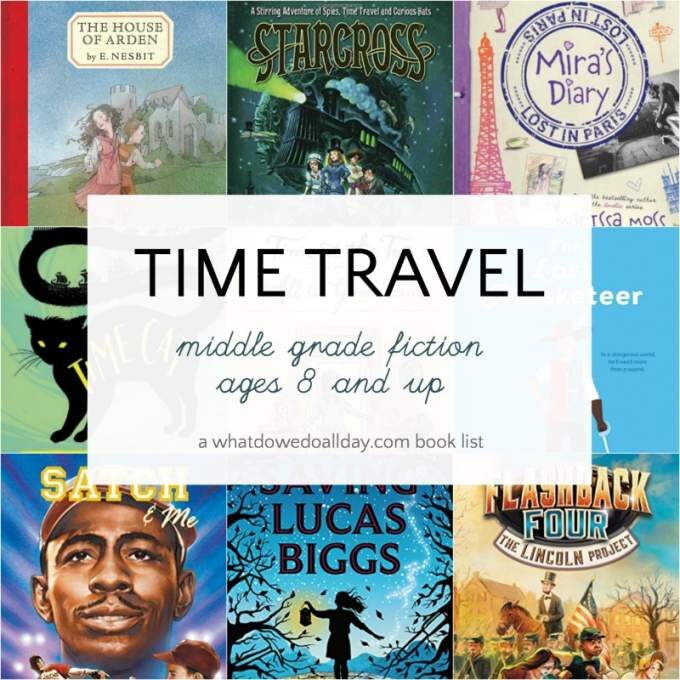 I've noticed several common elements in many of the books, like mysterious letters and missing parents. Ask your kids if they can find more. In general, middle grade books are for ages 8-13. The age recommendations I put at the end of each "blurb" are not set in stone! I've gone by the publisher/critics suggestions. (Note: book covers and titles are affiliate links.)

Flashback Four (series) by Dan Gutman. This is a fun series about a group of four kids who are recruited by a genius billionaire, Ms Z to travel back in time. Each book in the series has the kids traveling to a different historical period. In this first installment the group meets up for the first time. When Ms Z tells them they are to go back to the time of the Gettysburg address, David points out the obvious peril for him, a black boy. Ms Z's answer is a bit underwhelming but I was glad that Gutman raised the issue. Kids will really love this series and will learn a lot as well. Ages 8 and up.

Starcross: A Stirring Adventure of Spies, Time Travel and Curious Hats by Philip Reeve. Reeve is a master at science fiction and time travel stories. I didn't realize this is the sequel to Larklight when I picked it up so I guess perhaps your kids should start with that one. In any case, this is an incredibly imaginative and not-infrequently amusing. The Mumbys (mom and kids Art and Myrtle) travel to Starcross, a seaside resort where a strange hatter tries to control their minds with his evil headwear. Sound crazy? Oh, it is. Crazy. And wonderful. Ages 10 and up.

Time Traveling with a Hamster by Ross Welford. In this, one of the few children's books with a British Indian protagonist, Al Chaudhury gets a letter and a hamster from his deceased father. The letter tells him to find his father's time travel machine and go back in time to avert a disaster. A fun and suspenseful read, great for any fan of time-travel adventure books. Ages 10 and up.

Satch and Me (series) by Dan Gutman. The Baseball Card Adventure series travels back in time so kids can witness important events in a famous baseball player's life. Each book features a different player; Jackie Robinson, Jim Thorpe, Joe Stoshack and Babe Ruth are among the players on the roster. There are 12 books in all. Needless to say, this is an excellent choice for kids who love baseball! Ages 8 and up.

Mira's Diary Lost in Paris (series) by Marissa Moss. This is a fun time travel series. Each book takes place in a different city: Paris, Rome, London and San Francisco. Mira's mother is missing and a strange postcard prompts Mira, her father and brother to head off to Paris. While there, Mira is transported back to 1881. While in the past, Mira learns her mother is trying to help a Jewish officer falsely accused of a crime–Alfred Dreyfus of the Dreyfus affair. This is no fluffy time travel book, however. Mira learns about historical anti-semitism and encounters famous figures like Emile Zola and Edgar Degas. An author's note further educates the reader about historical events. Ages 9 and up.

Time Sight by Lynne Jonell. This engaging novel takes readers to Scotland, where Will and his brother Jamie have been sent while their father goes to find their mother who is in some kind of unspecified difficulty. While staying with cousins at the family castle, Will discovers he has "time sight," the ability to open up doorways into time–but only on the castle grounds. The two boys and their female cousin, Nan, take the doorway and travel to several time periods including the Bronze and Iron ages, and medieval Scotland. Lots of fun and has an old fashioned feel to it. Ages 8 and up.

The Last Musketeer by Stuart Gibbs. My son is a huge Gibbs fan, but we somehow only just discovered this trilogy. Fourteen year old Greg must travel through time to find his parents who have been flung into 17th century Paris and imprisoned. Keen to rescue them, Greg hooks up with three other teens, Aramis, Porthos and Athos and discovers a familial link to the famous musketeers. Lots of fun facts about what  living in 17th century Paris would have been like! Ages 8 and up.

Archer's Quest by Linda Sue Park. In this book, it is a traveller from the past who shows up in the present. Korean leader Koh Chu-mong surprises 12 year old Kevin by popping into is room one day. Koh Chu-mong is from 55 BCE. Kevin uses his math skills, the zodiac and Korean folk history to help the leader return to the past. There are not too many books that will teach your kids about ancient Korea while still delivering an engaging narrative so definitely pick this one up! Ages 8 and up.

On the Blue Comet by Rosemary Wells. Like the Hogwart's Express, the Blue Comet is a magical train that takes children on unexpected adventures. However, the Blue Comet crosses time and space, taking its riders back and forth between the 1920s, 1930s and 1940s. You can only board the Blue Comet if you possess an intense need to escape your current situation. That's exactly what happens when Oscar witnesses a crime. He is transported through time and must find his way back again.

Saving Lucas Biggs by Marisa de los Santo and David Teague. This story is historical fiction mixed in with a bit of magic. Margaret's family has a secret: they can time travel. Margaret has made a promise never to use this power, but when her father is wrongly sent to jail she breaks her promise. Margaret goes back to 1938 when the local mining corporation was exploiting the workers and a union movement is gaining steam. She hopes to affect the events which led to the young Lucas Biggs to turn into the heartless Judge Biggs who sentenced her father to death.

When You Reach Me by Rebecca Stead. This is a super cool book with an amazing "Wow!" ending. After an incident in which her best friend stops speaking to her, Miranda starts getting mysterious letters asking for her help. Miranda tries to interpret the letters and discusses time travel with another boy, Marcus. Part mystery, part sci-fi, part coming of age novel, this Newbery winner is not to be missed.  Ages 9 and up.

Time Cat by Lloyd Alexander. (1963) Instead of having nine lives, Gareth the talking cat is able to travel to nine different points in time. He takes, Jason, a boy, on adventures in Ancient Egypt, Rome, Peru and several other places where they get caught up in sometimes perilous situations. Great as a read aloud. Ages 8 and up.

Time at the Top and All in Good Time by Edward Ormondroyd. (1963) I've only read the Time at the Top, in which Susan takes an elevator, but when the doors open,  instead of revealing the 7th floor of the building, she steps out into the 19th century!  Enamored with the way of life, she befriends Victoria and the two conspire to get their parents together. After getting into scrapes involving buried treasure, Susan returns to the present and convinces her widowed father to travel back in time with her.  Ages 8 and up.

The House of Arden, by E. Nesbit (1908). Edred and Elfrida Arden are the heirs to Arden Castle, and just before he turns 10, Edred becomes Lord Arden, but he won't inherit the missing fortune unless he finds it before his birthday. The siblings set off on a time traveling adventure to find the treasure. Edred and Elfreda squabble like normal siblings and a grouchy magical creature, Mouldiwarp adds a quirky touch to this fun tale. One part fantasy and one part history! Ages 9 and up.

Tom's Midnight Garden by Phillipa Pearce. (1958) In the 1950s, Tom goes to live with his uncle and aunt where a clock strikes 13, there is a gorgeous but mysterious garden and his playmate is from the 19th Century. Beautiful, eerie, moving and wondrous. Ages 9 and up.