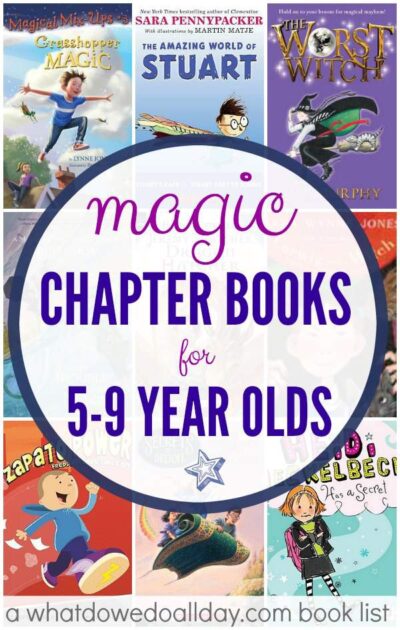 These books all feature large-ish fonts, illustrations and an easy reading length, perfect for 5-9 year olds. There is variation in reading level, so some are slightly harder than others. When I first started looking for early chapter books I learned a lot and wrote my parent tips for finding early chapter books. There are lots of helpful suggestions in that post.

MORE: Books for kids not ready for Harry Potter.

Magical Mix Up series. I read the second book, Grasshopper Magic out loud to my 6 year old (who unlike his brother at that age, is not reading early chapter books yet), and he quite liked it and asked for more. There was is quite a bit of age appropriate humor and it's a very friendly sort of book series. In each book (there are four so far) four siblings encounter a bit of magic, whose source is beneath their lawn and they rally around each other to undo the magical mix up.

Heidi Heckelbeck Has a Secret. (Series) Heidi comes complete with a glitter-covered cover. Don't let that put you off. Heidi, home-schooled until now, is starting second grade. Her discovery that she is a witch doesn't come until the end of the book, which means your child will demand, "Next book, please!" And that is always a good thing.  The large font and illustration-heavy pages make this series a good choice for emergent readers who want to feel like they are reading “real” chapter books but may still not be ready for some of the others on this list.

Matter-of-Fact Magic Book Series Ruth Chew wrote about 30 books in the 70s and 80s. Several have been republished in the last year and more are currently in the works. . I have only read 2 of the books in the series so far but each story is a stand alone (no character cross over -- so far) and the plots revolve around normal children discovering strange happenings in their neighborhoods - like magic trees or enchanted fudge from friendly neighbors who turn out to be witches.

Moongobble and Me (series). Moongobble has a problem. He is a wizard, yet everything he works his magic on turns to cheese. With his new apprentice, Edward, and a talking toad, he sets out to complete three tasks to prove he is a wizard in more than just name. This fantasy series, with lots of illustrations, is a good choice for kids who wish they were just a tad bit older and ready for Harry Potter.

Freddie Ramos Takes Off (Zapato Power). I have a great love for Freddy Ramos. After all, he and his mom love to read together. It’s also nice to see a Latino superhero, do you know many of those? One day Freddy receives a mysterious pair of shoes which turn out to have magical powers and Freddy, being the kind of boy he is, uses their power for good.

The Worst Witch (7 book series) This series takes place at a  boarding school for magic kids. In the introductory novel, Mildred begins her first year by getting a black cat and a broom. Poor Mildred, however, is not exactly the most skillful, coordinated witch in her class and her cat is a tabby! She mixes up potions and spells causing all sorts of chaos (and fun, of course).

Jeremy Thatcher, Dragon Hatcher: A Magic Shop Book. The Magic Shop Book series reminded me of Olivander's shop in Diagon Alley. Jeremy is not a wizard, but the eccentric shopkeeper insists he take home a mysterious box. Inside the box is an egg which hatches into a small dragon, and now Jeremy must quickly learn how to take care of it. The dragon cannot stick around forever, though, but tending him as helped Jeremy discovers new ways of navigating the perils of tween-dom. There are several books in the series, all with children who suddenly come face to face with something magical.

Early chapter books, Stuart Goes To School and Stuart's Cape are charmingly quirky stories by the author of the popular Clementine series. When Stuart is anxious about being the new kid, he makes himself a cape out of old neckties and it turns out to have magical properties. However things don't always go quite the way Stuart wants! These two short books also make great read alouds.

The Lost Stone (The Kingdom of Wrenly). I probably would have loved this series as a kid, even though I found it a bit unsophisticated now. However, the series has loads of fans, and I’m for anything that gets kids reading. Lucas is a reluctant prince. He’d rather dress in peasant clothes and hang out with the village children. He makes friends with Clara, the daughter of a seamstress and the two team up to find the queen’s missing emerald. Lots of traditional fantasy elements like fairies, wizards, mermaids will appeal to kids who like imaginative worlds.

Subscribe to our newsletter and as a thank you, receive 10 waiting games kids can play anytime anywhere.
Your email will *never* be shared or sold to a 3rd party. Click here to view our privacy policy.
« Poetry Writing Challenge for Kids {Week 1}
Butterfly Fairy Coloring Page (plus activity) »
22228 shares