So you have a little secret agent in training and you want to find a few good spy books to teach them the ins and outs of espionage. Or maybe your child has been carrying around a magnifying glass and sporting a decoder ring while engaging in an undercover operation to empty the cookie jar. (If they need more ideas, try these spy activities for kids.) Sounds like its time to check out these fascinating books about the lives of spies, both fictional and real life, nonfiction stories. and how to be a spy manuals. 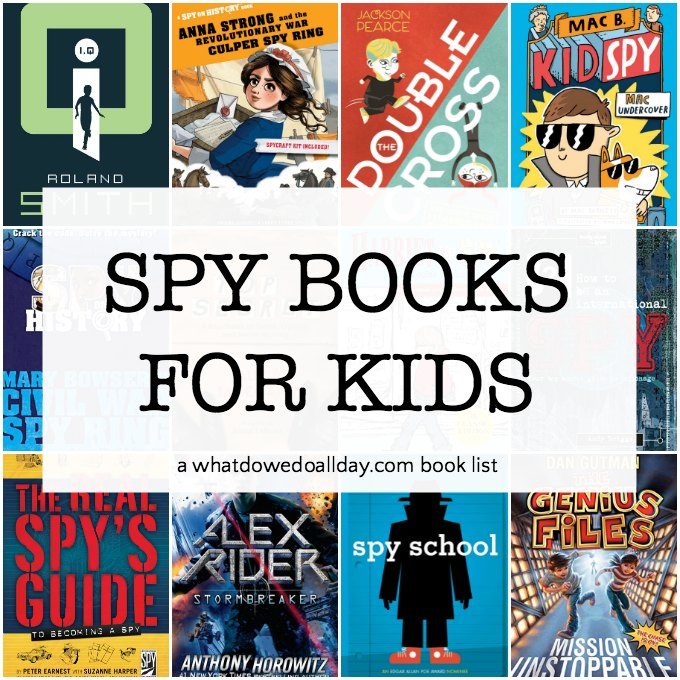 But don't worry, you don't have to go rogue in order to procure the titles below. There is nothing top secret about locating these books at the library or book store. I have three categories of spy books here: novels about fictional spies, nonfiction books or fictionalized biographies of real life agents, and how to be a spy instructional manuals! So whether your kid is a sleeper agent, a mole or a scout, dead drop a pile of books into his or her lair before you blow your cover as a meddling parent.
(Note: book covers and titles are affiliate links. As an Amazon Associate I earn from qualifying purchases.)

Spy School (series) by Stuart Gibbs. My older son adores this very funny spy book series! He is always eager for the newest installment. Middle schooler Ben Ripley really wants to be a CIA agent. He is shocked to find out his school is actually a secret  CIA training academy. But Ben is actually there by mistake. He doesn't let that stop him from trying to be the best super spy he can be! Ages 8 and up.

The Doublecross: (And Other Skills I Learned as a Superspy) (series) by Jackson Pearce. I read this spy book aloud to my youngest a few years ago and he loved it. Born to super spy parents, 12 year old "big-boned" Hale is having difficulty passing the physical portion of the test to become a secret agent. His sister, of course, is exceeding agile. Together they find out that their agency may not be the "good guys" and they work as double agents to try and uncover the truth. My son love the gadgets and antics in the fun spy book for 8 year olds and up.

Alex Rider (series) by Anthony Horowitz. Are your kids looking for a James Bond type spy novel series? This is it! So far there are twelve Alex Rider books in the series. In the debut novel, Stormbreaker, Alex is recruited to find his uncle's killers, and the adventure begins! My oldest son loved this series. Ages 9 and up.

I, Q series by Roland Smith is another spy series about a teenage spy that has captivated my older son. While on a music tour with his new, blended family, 13 year old Quest is sucked into a world full of suspicions, bumbling agents, and secret identities. Quest uses his magician and tech skills to find out the truth and foil evil plots. Ages 10 and up.

The Genius Files (series) by Dan Gutman. I honestly thought I had recommended this series before now! Both my sons gobbled up these books about a pair of genius siblings (named Coke and Pepsi...) who have been—unbeknownst to them—attending a school for a Secret Government Program. The duo find themselves chased all around the country by nefarious elements. Both my sons found this series to be hilarious, and I love that it takes place in crazy geographical locales! Ages 8 and up.

Harriet the Spy by Louise Fitzhugh. Pick up a classic spy novel! When her journal is stolen and her peers learn the unflattering things she wrote about them, Harriet finds herself an outcast. What makes Harriet so wonderful is that she is a real person, and not a character in a fantastical spy thriller. There are no wondrously inventive gadgets, or cackling villains, just middle grade kids making their way through the growing-up process. Harriet is not always (maybe not even often) pleasant to everyone, she makes mistakes, but she is smart and resourceful. Awesome. Ages 8 and up.

Mac Undercover (series) by Mac Barnett. My son gobbles up any book by Mac Barnett and this is his latest offering (as of this writing). Junior undercover agent, Mac B. gets a call from the Queen of England. Obviously, he must answer the call and travel around the world to recover her stolen treasure. This title is so much fun and with lots of humorous illustrations, its a wonderful choice for reluctant readers. I also give the Mac B. series bonus points for being set in the 1980s!

Spy on History: Mary Bowser and the Civil War Spy Ring by Enigma Alberti. Mary Bowser was an enslaved African-American who managed to infiltrated the household of the Confederate president, Jefferson Davis. An extremely intelligent woman, she had to play the role of an illiterate, dim-witted household slave but she also played a key role in Civil War spy networks. This is a fictionalized accounting of Bowser's contributions as there are precious first primary sources about her life. Also includes a "spycraft kit" so kids can decode a message about the story. Ages 8 and up.

Anna Strong and the Revolutionary War Culper Spy Ring: A Spy on History Book by Enigma Alberti. Like the Mary Bowser story, this is a fictionalized history of Anna Strong, a woman who lived through the American Revolutionary War. At great danger to herself, Anna becomes involved in a plot to get vital war information to  fellow patriots. Also includes a "spycraft kit" so kids can decode a message about the story. Ages 8 and up.

George Washington, Spymaster: How the Americans Outspied the British and Won the Revolutionary War by Thomas B. Allen. National Geographic published this intriguing story of Washington's den of spies and how they helped him lead the revolutionaries to victory. I didn't learn any of this in High School history so I learned lots and now your kids can, too! Ages 9 and up.

How to Be a Spy Books

How to be an International Spy: Your Training Manual, Should You Choose to Accept it. Tons of fascinating information on spy stuff like secret codes, disguised, gadgets and more. A diverse layout format with side blurbs, photos, illustrations and more make for an engaging read, perfect for reluctant readers.

The Read Spy's Guide to Becoming a Spy by Peter Earnest and Suzanne Harper. This manual was written by a real life former CIA operative; he is also the founding director of the International Spy Museum! This informative book is chock full of goodies for aspiring spies! Watch your back, because after their kids read this one parents may fall victim to some serious espionage and counterintelligence!

Top Secret: A Handbook of Codes, Ciphers and Secret Writing by Paul B. Janeczko. You can find a lot of books on writing in code. We liked this one because it offers instructions for basic to complex codes, but also includes fascinating historical details.

Also try this secret code scavenger hunt my kids loved or learn to write in the pigpen code! 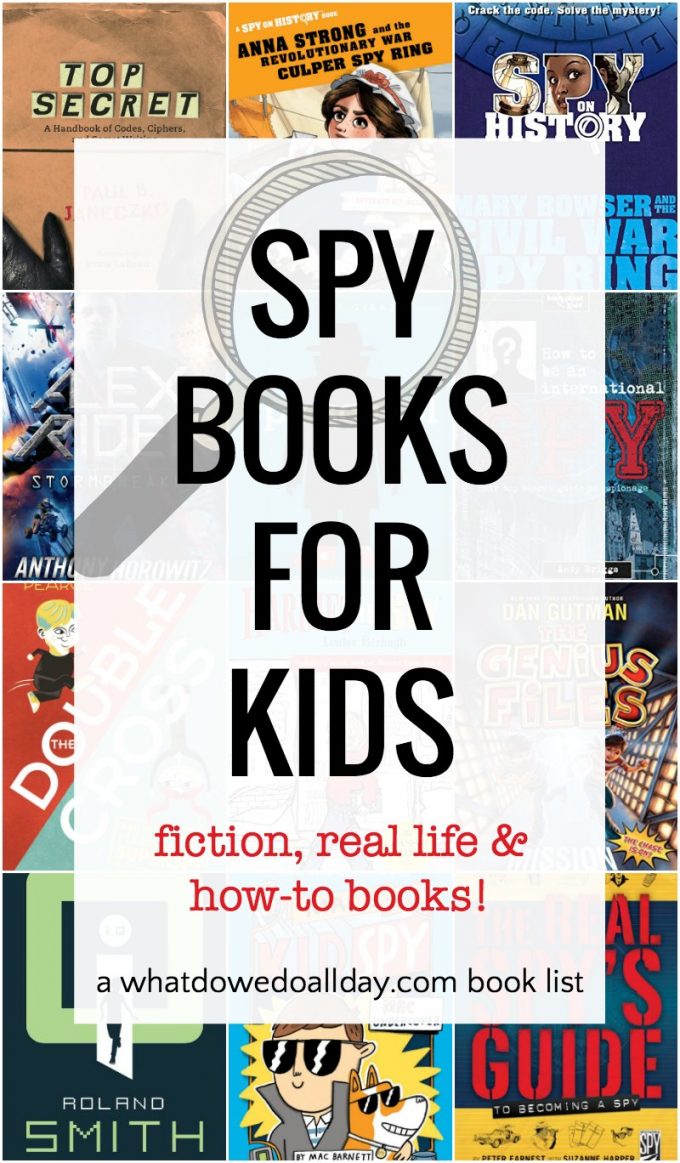 Subscribe to our newsletter and as a thank you, receive 10 waiting games kids can play anytime anywhere.
Your email will *never* be shared or sold to a 3rd party. Click here to view our privacy policy.
« ABC Books for Kids that Parents Will Enjoy Too!
Picture Books to Support Emotional Intelligence »
616 shares