×
You are here: Home / Books / November Read Alouds You Will Be Thankful For
342 shares

This November read aloud book list is a bit of a hodgepodge. You might expect books about turkeys, leaves and Thanksgiving gratitude. And yes, I did include picture books and poetry with a thankful theme, but I didn't want to limit the picture books to Thanksgiving or gratitude as I already have book lists on those topics. The result is a book list with a theme of family, community, truth and honor.

Almost all of these books are titles I have read quite recently and many of them were published in 2018.  (my Instagram followers may recognize some of them). I waffled a lot about how to make a cohesive list based on theme, and finally decided give up on that goal. And yet, somehow, after I curated the list, all the books seemed to go together and be the perfect selections to read aloud during November!

As I said in the introduction, these books focus on positive communities based on honor and generosity, and strong families.

Thank You, Omu! by Oge Mora. I adore the wonderful cut-paper collage illustrations in this timeless tale about the community value of sharing and showing gratitude. Omu is making stew and its delicious smell enchants the neighborhood. One by one, a diverse group of visitors, drawn in by the scent of Omu's stew, knock on her door and ask for a bowl. Omu generously hands out portions but eventually realizes that she no longer has any left for herself. Not to worry! Her neighbors don't forget her kindness and they all join together to return the favor.

We Are Grateful: Otsaliheliga by Traci Sorell. In Cherokee, otsaliheliga expresses gratitude. Author Sorell, a member of the Cherokee nation, takes readers on a journey through the seasons, narrating experiences to be grateful for. The journey is both delightful and peaceful, and the illustrations depict contemporary Cherokee life. Accompanying the English text are occasional words written in Cherokee syllabary, along with a phonetic spelling. A glossary and complete Cherokee syllabary make up the end notes. This book is the perfect November read aloud–don't miss this special celebration of gratitude and community.

The Wall in the Middle of the Book by Jon Agee. Are walls really all they are cracked up to be? You might think one side is safer than the other, but is it really? A small knight is convinced that danger lurks on the other side of a large wall. Even as the knight is increasingly imperiled by rising threats on his side of the wall from which his armor won't protect him, he refuses to see the truth. Fortunately for him, the inhabitants on the other side of the wall are not so blind  This timely picture book speaks volumes about our perceptions about safety, isolation and trusting others.

Hammering for Freedom by Rita Lorraine Hubbard. Learn about the extraordinary William Lewis. Born into slavery, Lewis learned blacksmithing and when his owner rented him out he let Lewis keep some of the pay. Lewis saved enough money to buy his freedom, and then spent the next decades slowly buying the freedom of all of his family members. Hubbard skillfully narrates Lewis' astounding story while also managing to weave in details about laws governing slavery during the early 1800s.

The Lying King by Alex Beard. This oversized picture book about a ruler who lies and lies and lies is quite the timely tale. The story, told in clever rhymes, depicts how lies snowball and ultimately catch their creator in a trap of his own making. Let's hope the fate of the lying warthog is a harbinger of things to come. Yet this book is also a timeless and valuable story to use as a springboard to discuss the value of truth with your children.

The Circle of Thanks by Joseph Bruchac. I was certain I had shared this poetry book on a previous list, but I hadn't so now's your chance! Pick it up at your library, or add these 14 poems to your home collection. Each poem is a ode of gratitude for an element in the natural world. "Rain Song," "Song to the Dancing Stars," and "Healing Song of the Wind" are among the selections. Bruchac identifies the Native American culture from which each poem comes and the illustrations depict the corresponding landscape and people at work or in celebration.

A Boy Called Bat (series) by Elana K. Arnold.  Third grader, Bixby Alexander Tam, goes by the nickname Bat and exhibits behaviors that might place him on the spectrum. He flaps his hands and avoids eye contact, but the author never labels Bat "autistic."  She simply allows us to see Bat, and all his friends, as unique individuals. Bat's mom is a veterinarian and one day she brings home baby skunk. Bat wants to take care of it and must prove to his mom that he knows what he is doing. Full of wonderful characters and lots of interesting information about skunks, this is an absolutely delightful story. It makes a nice read aloud for ages 6 and up or a great independent read for ages 7-10.

The Language of Spells by Garret Weyr. Grisha is a dragon born in the Black Forest, but when he is still rather young a sorcerer turns him into a teapot. While he is enchanted, Grisha observes the world and ends up in London where he is finally freed from his teapot form. He returns to Vienna where he lives and works with other dragons and where he befriends 11 year old Maggie. Together Grisha and Maggie set out to discover the whereabouts of the golden-eyed dragons, who have all mysteriously disappeared. Lovely illustrations accompany this marvelous tale of friendship, bravery and sacrifice. Read aloud to ages 7 and up, independent read for ages 9 and up.

The Book of Boy by Catherine Gilbert Murdock. Boy, as he is called, is an outcast in his medieval village. He is able to communicate with animals, is mocked for his misshapen back and treated cruelly by those he works for. One day a pilgrim named Secundus  passes through and engages Boy as his servant on his journey to retrieve the relics of Saint Peter. Along the way, Boy meets fascinating characters, falls into dangerous and mysterious adventures and learns that things, including his own sense of self, are not always as they seem. This is a spellbinding tale which will have you and your kids discussing the nature of goodness and making choices. Read aloud to ages 7 and up, independent read for ages 8 and up.

Wishtree by Katherine Applegate. Red, the 200-plus year old tree, narrates this tale. From her perspective we learn about a celebration in May in which the town inhabitants come to tie their wishes to the tree. We learn about the animals who take shelter in Red, the past neighbors who have found solace in Red, and we see Samar, a lonely girl who comes to spend time at the tree. When a boy hangs messages of hate about Samar on the tree, Red begins to communicate with the animals to intervene and bring hope back to the community. Wonderful.  Read aloud to ages 7 and up, independent read for ages 8 and up.

More lists in this series: 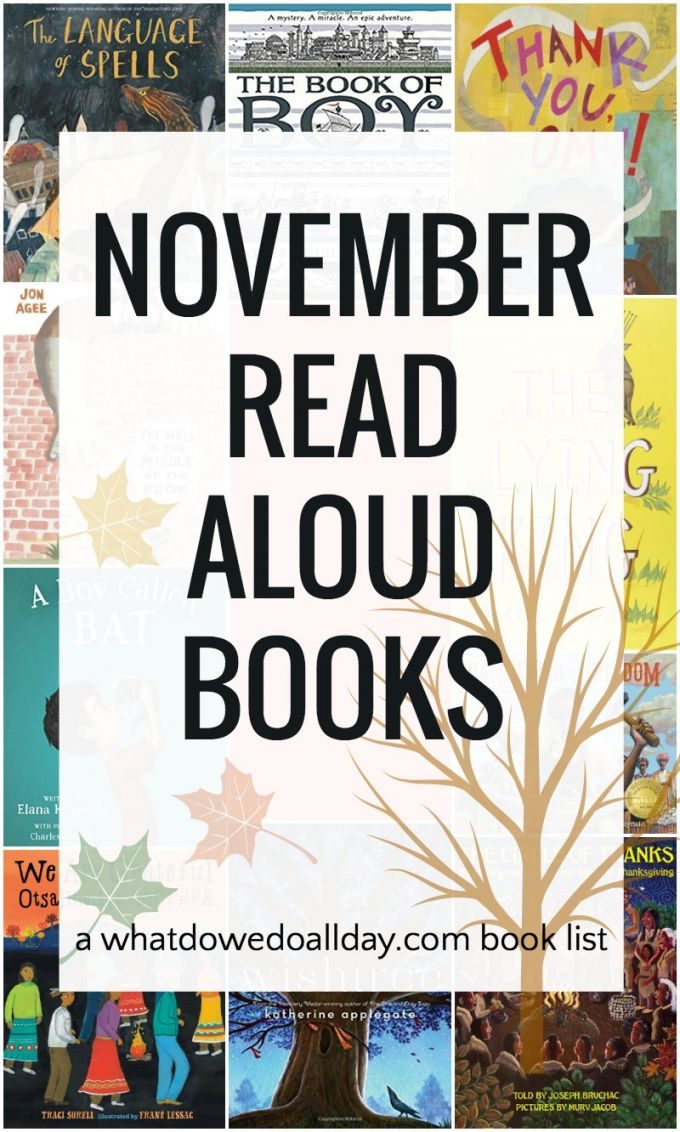