March! A month of contradictions. Is it spring? Not yet! Is it winter? Not much longer! When making this list of March read alouds I wondered what our fickle friend would offer up for thematic inspiration. Besides St. Patrick's Day, of course. For that you can take a look at my list of Irish folktales. And it just seemed too soon for a spring theme. I settled on a few things, since, like March, I often can't make up my mind! 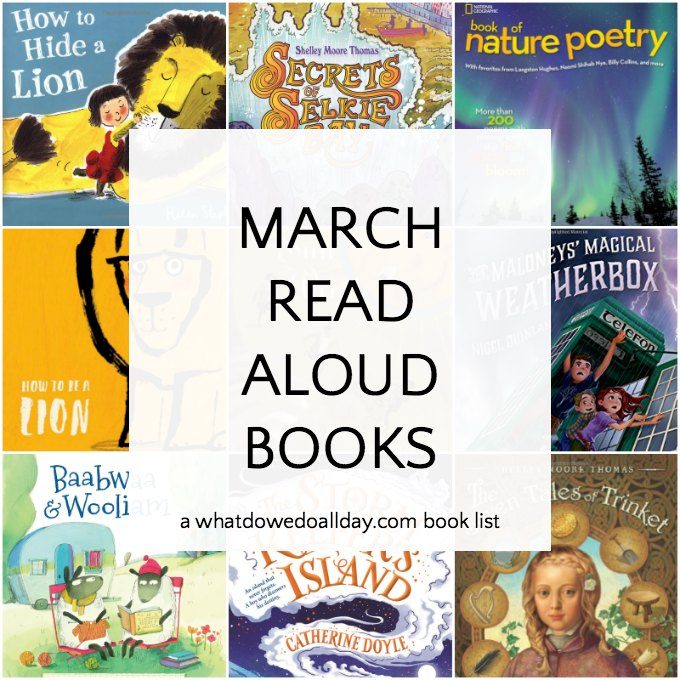 On this list of March read aloud books you will find titles about lions! Lambs! Weather and storms, and of course, some of them are set on the Emerald Isle of Ireland, itself. You may also find an alarming number of selkies. There is a book for everyone: picture books, a goooorrgeous poetry book and some chapter books for those of you who have kids willing to sit still for more than 5 minutes. (Note: book covers and titles are affiliate links. As an Amazon Associate I earn from qualifying purchases.)

Baabwaa and Wooliam: A Tale of Literacy, Dental Hygiene, and Friendship by David Elliot. Oh, how I love this book and I hadn't realized it was not on a list until a reader recommended it to me. I am glad I now have the chance to return the favor and recommend it to you, dear March reader. Wooliam reads and Baabwaa knits and while they are enjoying the day a filthy sheep with terrible teeth (who is actually a wolf) appears. But sadly, he can can not read. So Wooliam sets out to teach him to read, and Baabwaa will knit him a nice fresh sweater. Absolutely hilarious!

How to Be a Lion by Ed Vere. This is such a wonderful book about how there are many ways to be an individual. Leonard knows that lions are expected to be fierce but he is not going to go down that route. Instead, he is going to be himself, write poetry and play with his friend Marianne, the duck. Together they write a poem to tell the other lions that Leonard does not have to live up to the stereotype. The story holds an important message about being yourself, especially for boys who are under pressure to be "tough." Extraordinary.

Gilda the Giant Sheep by Emilio Urberuaga is a marvelous book first published in Europe 25 years ago. When the shepherds decide to turn Gilda into mutton stew, she runs away. It takes her a while to find a home, rejecting first the city, then the circus. The giant sheep rescues a fellow normal sized sheep who then takes her home. Now safely settled, Gilda finds her gigantic size comes in handy scaring away the wolves. Clever and unique.

How to Hide a Lion by Helen Stephens. These read aloud lists are supposed to be all brand-new to my book lists, but I didn't realize I had this title on one of my favorites of 2013 book list. But I know you will forgive me since that was 6 years ago!  When a lion wanders into town and is chased off by the inhabitants, only a little girl recognizes his true kindness and works to keep him safe. It's not easy to hide a lion, though, especially when he enjoys jumping on the bed! This book is big with gentleness as well as some laughter as Iris tries to find a good spot to hide her new friend. The townspeople eventually see the lion for the tender soul that he is when he save the town from a burglary. There's a lot to be found studying the illustrations, which remind me of vintage books from an earlier time.

The Contest Between the Sun and the Wind by Heather Forest. There is a reason we read Aesop's fables nearly three centuries after he told them! This engaging story relates a contest to see who can force a man to remove his coat. Will it be the fierce wind or the gentle sun? See if your kids can guess who, and the reason why!

National Geographic Book of Nature Poetry, edited by J. Patrick Lewis. This poetry book will blow you away. The gorgeous photographs that National Geographic is known are the backdrop for a collection of poems, both classic and contemporary. You may not end up reading every poem during March, but surely you will want to continue exploring the book in April, as it that is National Poetry Month!

December days were brief and chill,
The winds of March were wild and drear,
And, nearing and receding still,
Spring never would, we thought, be here.
~Arthur Hugh Clough

The Seven Tales of Trinket by Shelley Moore Thomas. I have been waiting for the perfect list to share this book with you! It is your next favorite read aloud.  After the death of her mother and with the company of Thomas the Pig Boy, eleven year old Trinket sets out to find her father, a wandering bard. Trinket has her own gift for storytelling and on her journey she encounters strange and wonderful personalities, some are creatures drawn from Celtic mythology and folklore, like the selkie, banshee and the pooka. Absolutely splendid! Suitable for reading aloud to ages 7 and up. (Some of the characters may seem scary to sensitive kids.)

The Storm Keeper's Island by Catherine Doyle. Fionn and his sister are headed for Arranmore Island, where his grandfather lives. After arrival, Fionn learns that the island holds strong magic and his grandfather, known as The Storm Keeper, holds the key to the magic. But now the island is going to choose a new Storm Keeper and dark forces are trying to prevent Fionn from taking over his grandfather's place. A fantastical, mystical read. Even if you don't read it aloud, hand it off to your kids to read themselves! Ages 8 and up.

Secrets of Selkie Bay by Shelley Moore Thomas. Cordie and her three sisters live with their father on the coast of Ireland in a seaside town that profits off tales of the mythic selkies, seals who can shed their skin to become humans on land. Their father used to research the local pixie seals, who have now all mysteriously disappeared. Their mother has disappeared too. When Cordie spins a tale for her sister, Iona, the younger sister becomes convinced their mother is a selkie, returned to the sea. Be prepared for a surprise ending! Read aloud for ages ⅞ and up.

The Maloneys' Magical Weatherbox by Nigel Quinlan. This is a delightfully quirky book. The Maloneys have a weatherbox outside their bed and breakfast in the Irish Midlands. When the seasons change, the weatherman, Mr. Maloney, is there to help them along. But this year as summer is to make way for autumn things go awry! The story is told in alternating narrations of the two kids, Niel and Liz, which normally might make for a confusing read aloud, but the book offers fun opportunities for different voices! May be intense for younger kids; skip it if the phase "What the h---" bothers you, or edit while reading aloud. Read aloud for ages 8 and up.

Secret of Ron Mor Skerry by  Rosalie K. Fry. I added this title at the last minute because I honestly thought it was on my list of Classics You Haven't Read Yet. See, I can't even keep track of my own book lists. This book was the basis for the movie The Secret of Roan Inish, which you should definitely watch. Fiona is happy to be leaving the city to live with her grandparents in the rugged Western Isles of Scotland. While there she breathes in the magic of the place, listening and learning about the legends of selkies and tales of her mother's way with the sea animals. She also believes her brother Jamie, who disappeared in the sea, is still alive somewhere and she is determined to find him. Magical and lyrical. Read aloud to ages 7 and up.

It was one of those March days when the sun shines hot and the wind blows cold: when it is summer in the light, and winter in the shade. 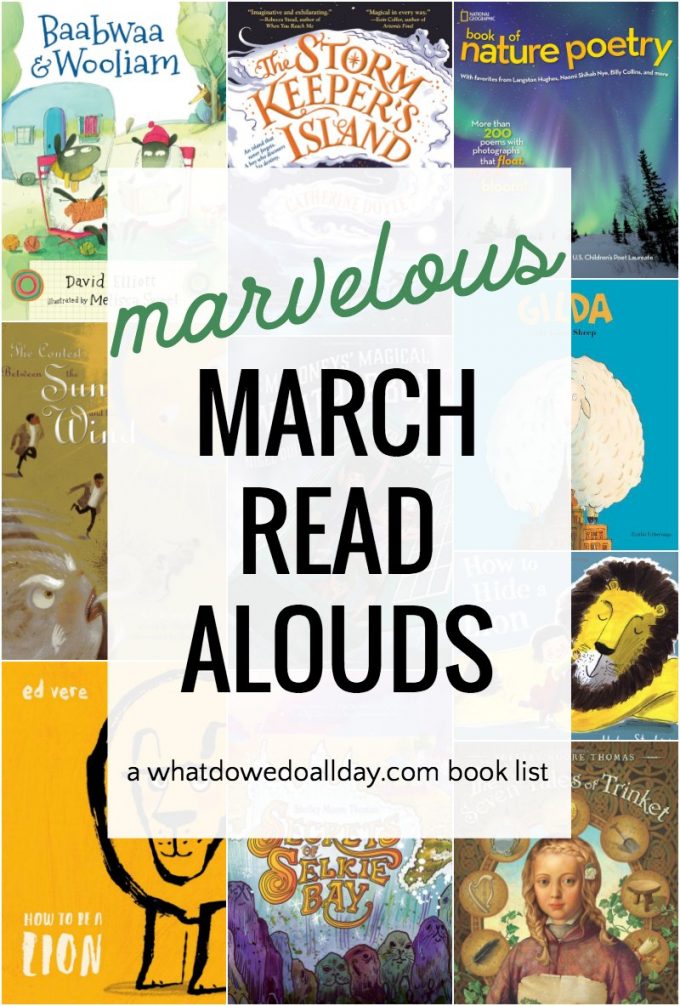 Subscribe to our newsletter and as a thank you, receive 10 waiting games kids can play anytime anywhere.
Your email will *never* be shared or sold to a 3rd party. Click here to view our privacy policy.
« Sprinkle Rainbow Joy Around Your Living Room
Irrational and Transcendental Number Fun for Pi Day: Pi Dice Game »
372 shares