I’m continuing my folktale picture book series with Native American stories. Although I titled this list “Native American folktales,” I believe it would be more correct to say “traditional stories” (you can correct me in the comments); I have also limited this list to North America (excluding Mexico). 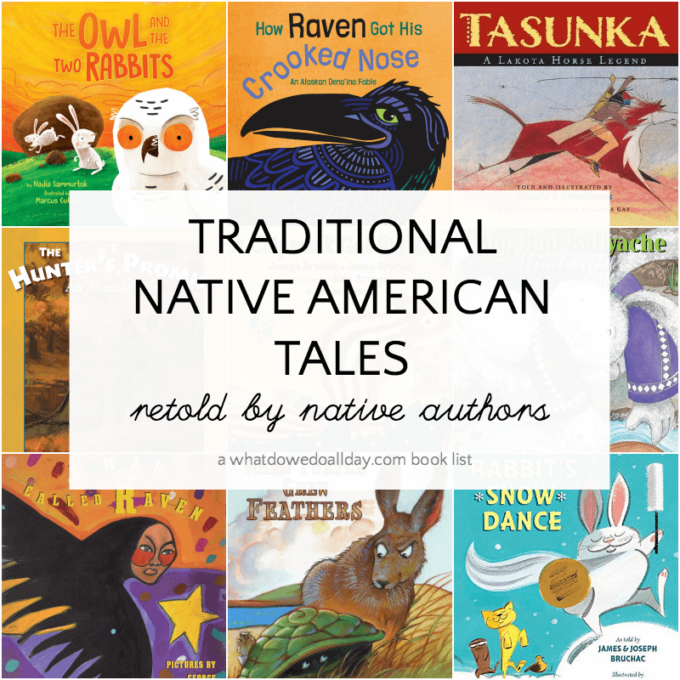 While November is Native American Heritage Month, the perfect time to share these folktales with your kids is actually all year round.

As I mentioned in my introduction to African Folktales, these books are not substitutes for contemporary American Indian stories. In addition, it’s important to remind kids that Indigenous people in North American are a diverse group. One tribe’s population is not interchangeable with another. Where possible, I’ve indicated the origin of the folktale recounted in the picture books, below.

For more recommended stories, I suggest the website American Indians in Children’s Literature. Ms. Reese has an excellent article, “Proceed with Caution: Using Native American Folktales in the Classroom.”

As you might expect, most of these tales center around the importance of animals and connection between humans and the natural world. Many of them are also pourquoi tales, a type of “why things are the way they are” story. Pourquoi tales are common across all cultures. I am obviously not an expert in Indigenous storytelling and I welcome your comments on these book selections, as well as other recommendations by Native authors.

Tasunka: A Lakota Horse Legend by Donald F. Montileaux. Brilliant illustrations capture the beauty and movement of the magnificent horse in this retelling of a Lakota legend. Legend has it that long before the White man appeared the Lakota tamed the wild horses, bringing prosperity to their people. But after they misuse the power of the horse, The Great Spirit takes them away for hundreds of years. The book includes further information on the importance of the horse for the Lakota as well as additional resources. Bilingual.

Chukfi Rabbit’s Big, Bad Bellyache by Greg Rodgers. (Choctaw) I absolutely adore trickster tales! Chukfi is super lazy and while all the other animals chip in to build Mrs Possum a new house, Chukfi takes it upon himself to avoid any work. However, he changes his mind when he hears their is food to be had and while everyone else is working he helps himself to some delicious butter. As you might expect from a traditional tale, Chukfi is in no way rewarded for his laziness and greed! Great fun.

A Man Called Raven by Richard Van Camp. Van Camp has written a contemporary story that draws upon traditional legends he heard from his Dogrib elders. Two brothers abusing a raven are confronted by a man who tells them a story of a man who, like them mistreated a raven and was transformed into one. As a raven he learned respect for life and to take care of others who are in trouble, sometimes transforming back into a man to teach others the same lesson. At the end of his tale, their is a great swirl of feathers… Gorgeous artwork, too!

The Owl and the Two Rabbits by Nadia Sammurtok. (Inuit) Two rabbit sisters play outside in the evening, despite their parents’ warnings to stay inside due to the danger of predators. Their rowdy play soon lowers their defenses and an owl swoops in, hoping to catch dinner. The owl grabs both rabbits, despite the warning by his wife not to be so greedy! In the end, he cannot maintain a hold on them both and the two rabbits escape. Both parties, rabbits and owl have learned their lesson!

How Raven Got His Crooked Nose: An Alaskan Dena’ina Fable by Barbara J. Atwater & Ethan J. Atwater. (Dena’ina) A grandmother retells a traditional cautionary tale about the raven, Chulyen. One morning, the trickster raven Chulyen discovers his nose is missing. An old woman has been using it as a tool, causing it to be bent. Transforming into a human, he attempts to find and reattach his nose but is unable to do so before his magic transformation fades and is stuck with the crooked nose forever. I love the way Dena’ina words are used throughout the text as well as how the authors incorporate facts about the Dena’ina culture. Further information is offered in the glossary.

The Hunter’s Promise: An Abenaki Tale by Joseph Bruchac. (Wabanaki) One winter a hunter falls in love with a mysterious women who disappears when spring arrives with the request that he promise to remember her. The following winter they meet again, this time the woman is accompanied by their child. Later, the chief’s daughter tricks him into forgetting about his winter family but her deception is not strong enough for the hunter’s promise. A wonderful story that emphasizes the importance of keeping promises and the connection to the nature.

When Turtles Grew Feathers: A Tale from the Choctaw Nation by Tim Tingle. (Choctaw) This tale will remind kids of Aesop’s fable, The Tortoise and the Hare. A turtle and a turkey have a bit of a collision and a mix up results in a rather amusing race with an arrogant rabbit.

Baby Rattlesnake by Te Ata and Lynn Moroney. (Chickasaw) This is an engaging traditional Chickasaw story for preschoolers about a baby rattlesnake who finally gets his rattle. The trouble is, he needs to learn how to use it properly and not just to create a little mischief. Parents will hope their kids pick up on the lesson of learning self-control and responsibility! Also available in Spanish.

How Chipmunk Got His Stripes by James Bruchac. (Eastern) This is a fun pourquoi story. Bragging Bear and Teasing Squirrel have a competition. Bear insists he can tell the sun not to rise in the morning, and squirrel insists he cannot. When the sun rises and bear looks foolish in front of the other animals, he takes out his humiliation on squirrel, transforming him into a chimpmunk with the flick of his sharp claws. The moral: neither the braggart nor the teaser will win in the end.

Rabbit’s Snow Dance by Joseph and James Bruchac (Iroquois) I included this marvelous story on our favorite picture books of 2011. New Kid loved it and was singing Rabbit’s chant for quite some time. Rabbit performs his snow-dance so many times that the snow falls till it covers the trees. Unfortunately for Rabbit, this leads to a slight mishap which now explains why his tail is no longer lusciously long.

You can find more books by Native authors on these two lists:

More folktales you will love:

This list is incomplete, of course. There are many more Native American folklore picture books out there to explore and enjoy with your kids. What books would you add? We love getting more suggestions.

Subscribe to our newsletter and as a thank you, receive 10 waiting games kids can play anytime anywhere.
Your email will *never* be shared or sold to a 3rd party. Click here to view our privacy policy.
17759shares
« Unicorn Books for Kids that Won’t Give You A Sparkle Headache
Game of the Month: Invasion of the Cow Snatchers »