Ready for a game with the most intriguing name ever?

How about "The Invasion of the Cow Snatchers?"

Makes you wonder what the game is actually about, doesn't it?

I'll start out by telling you it's a single player logic game, and in case you're new here, I've already mentioned one billion gazillion times how we adore logic games. It's also by ThinkFun, and I've also fangirl-ed several times about how much we love their catalog of single player games. I don't know how they keep coming up with new ideas, but they do!

Below I will share a bit about the gist of the game, plus my thoughts and recommendations.

On to the game! 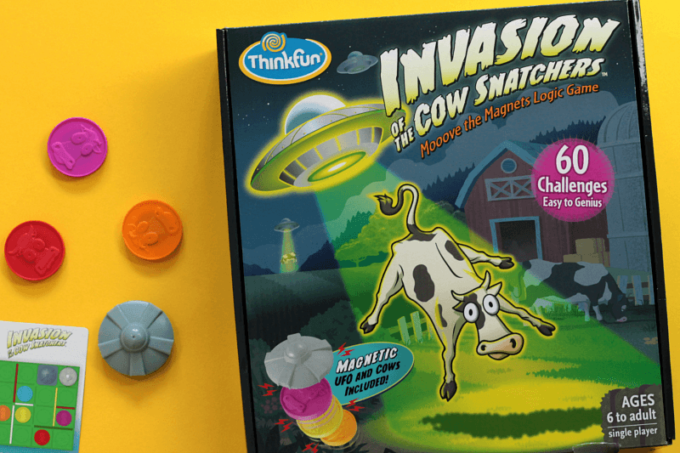 (Note: ThinkFun sent us a game to try out. This post is all my own opinion–duh. Affiliate links are included. No other compensation was received.)

About Invasion of the Cow Snatchers

As I previously mentioned, Invasion of the Cow Snatchers: Mooove the Magnets Logic Game (I mean it's like that name is after my pun-filled heart) is for a single player.

The game components include a board (the cow field) with raised transparent cover, several cow magnets, obstacle tokens, silo, fences in varying heights and a magnetic UFO. To play, you arrange the obstacles and cows in accordance with the challenge cards and then use the UFO to "beam up" the cows one at a time. You must figure out what order you can pick them up without being stumped by the obstacles.

Watch the video to see how it is played:

Like many of ThinkFun's logic games, this one comes with a set of challenge cards in multiple levels so people of all skill sets, even puzzle experts, can try their hand at it.

What Can Snatching Cows Do For Your Child?

First and foremost, single player logic games are excellent at keeping your kids off screens. Too often kids turn turn playing video games on their phones or tablets whenever the first hint of boredom strikes. Games like Invasion of the Cow Snatchers offer an engaging way for kids to banish boredom while still getting the satisfaction of "leveling up," overcoming obstacles and using their hands to manipulate objects, although in a much more "hands-on" fashion that a screen.

In addition, Invasion of the Cow Snatchers is excellent at building thinking, visual perception and reasoning skills. Failure is not an option! So kids learn that perseverance pays off and evokes a feeling of satisfaction over a job well done! 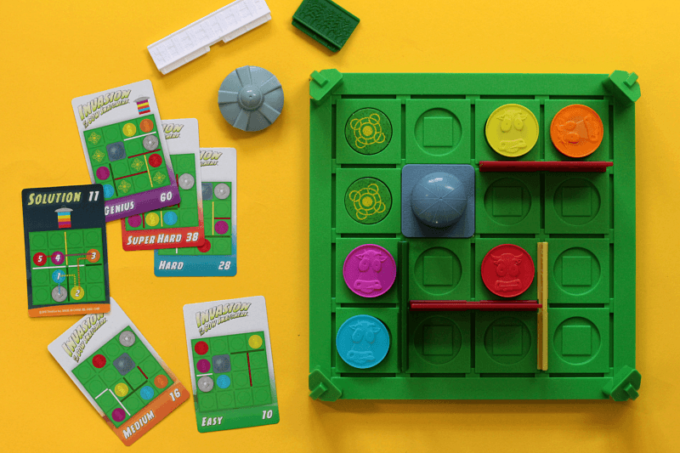 ThinkFun recommends this game for ages 6 and up. I concur, although I imagine that the harder levels will not easily (if at all) be overcome by a 6 year old. I always recommend sitting down with your child when they first learn how to play these types of logic games.  However, I think that makes the game all the more valuable; it grows with your child.

We already have a ton of single player logic games, but Invasion of the Cow Snatchers is unique enough to add to any collection.

Our verdict: highly recommended and a great addition to your overflowing game closet. 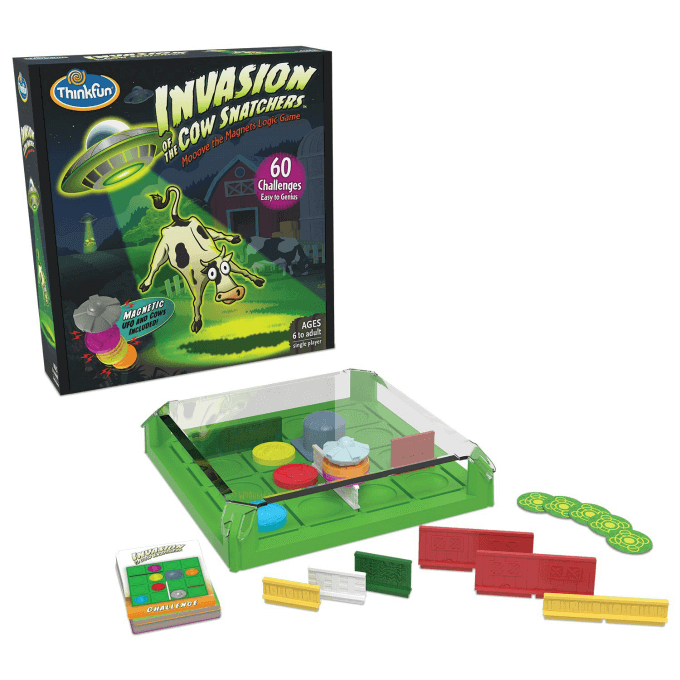 Subscribe to our newsletter and as a thank you, receive 10 waiting games kids can play anytime anywhere.
Your email will *never* be shared or sold to a 3rd party. Click here to view our privacy policy.
« Native American Folktales for Kids - Written By Native Authors
If You Like The Hunger Games... Read These Next! »