×
You are here: Home / Books / 14 Latin American Folktales for Kids

Myths and folktales are a great way to introduce kids to a variety of cultures. Not only that, you can be sure that only good stories survive the test of being passed down generation after generation. Hispanic Heritage Month starts September 15, so now is a great time to introduce your kids to folktales from Latin America. 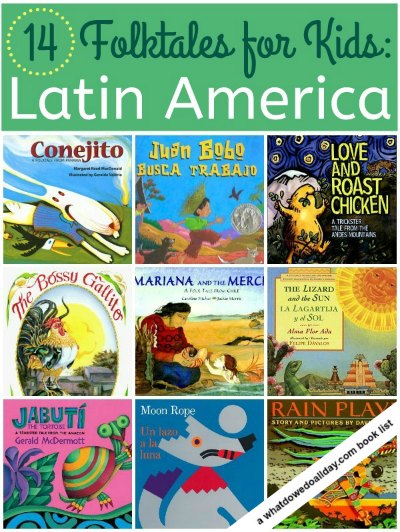 Most of these titles include a spattering of Spanish words and phrases (a glossary is usually included) and several are either bilingual or have Spanish versions available. Although there are folktale anthologies available, I've chosen picture books for this collection since they are often more appropriate for younger kids. As always, I'd love to know if you've read and enjoyed any of the titles on this list and if you have any recommendations for further reading, your comments are very welcome!

{Note: Book choices and opinions are entirely my own -- and my kids'! I have included affiliate links should a title spark your interest.}

Mariana and the Merchild. (Chile) This is quite a moving story! I won't deny I got a little misty-eyed! Old Mariana longs to play with the village children, but they tease her and are afraid of the sea wolves that live near her home. One day, Mariana finds a shell and when it splits in two it reveals a mer-child. The mer-child's mother asks Mariana to take care of the child until the sea is safe again. Watching Mariana and her new charge, the village children overcome their fear of the old woman and even offer comfort when the mother returns to claim her child. The illustrations are lovely and the text conjures up wonderful imagery, especially of the sea-wolves and sea spirits. If you need a break from Disney-style mermaids, this book may be just what you are looking for.

Before I started researching books for this list I would never have expected to find a Lois Elhert book to include! Much less, two. That's not because I didn't think it was the kind of book she would write, but because I would have bet money I'd already read her entire oeuvre! Elhert fans will love both of these bilingual stories. Moon Rope

(Peru) is a porquois tale explaining why moles prefer a solitary life in tunnels. It is surprisingly funny! In Cuckoo

(Mexico), the beautiful but lazy Cuckoo comes through for her feathered friends when she sets aside her vanity to save much-needed seeds from a devastating fire, proving once again that inner beauty is more important than fine plumage.

The Lizard and the Sun. (Mexico). If you are looking for children's books with an Hispanic bent put author Alma Flor Alda on your list. She's written more than 200 (!) books for kids. Ever wonder why lizards like to laze about in the sun (hint: it's not because of their cold blood)? It all started when the sun disappeared and the lizard went in search of it. With a little help from an Aztec emperor, a woodpecker and a great feast, he is able to bring the sun back from its slumber. With lots of detail, the illustrations really bring to life the Aztec culture.

Jabuti the Tortoise. (Brazil/Amazon) We read this trickster tale in the library reading room and when a glitch in the computer system wouldn't allow us to check it out, my 4 year old had a nervous break-down. Beautiful, shiny Jabuti plays sweet music on his pipes, but his mischievous exploits do not earn him the goodwill of all the animals and the vulture takes it upon himself to trick the trickster.

The Race of Toad and Deer (Mayan) Several of my folktale lists have included a local version of the tortoise and the hare story. This time it is the deer who is undone by his boasting and vanity.  Instead of being slow and steady, the crafty toad enlists the help of his fellow toads to help him win the race. Domi's vibrant watercolors are a wonderful addition.

Musicians of the Sun (Aztec). The Sun is holding four musicians hostage. Tezcatlipoca, the Lord of the Night, wants to bring color back to his world so he sends Wind to rescue the musicians. McDermott's illustrations are absolutely gorgeous: a mix of cut paper collage, paint and texture. An end note explains the story's roots in Aztec mythology.

Conejito (Panama). Oh, how my 4 year old loves his trickster tales! Conejito is on his way to Tía Mónica's house for some delicious treats. On the way he encounters a tiger, a fox and a lion (who would all consider our hero a tasty treat). Spanish words are sprinkled throughout the text (glossary included) and kids will have fun joining in Conejito's song (as will moms like me who enjoy hamming it up).

Rain Player (Mayan). Amazingly detailed cut paper illustrations accompany this Mayan folktale. Pik is a young man who loves playing a ball game called pok-a-tok. One year a drought is predicted and Pik challenges the Rain God, Choc, a a game of pok-a-tok. If Pik wins, it will rain again. If Pik loses, ... well, Choc will turn him into a frog. My older son, who is a little sports crazy right now, really loved examining the game play in the detailed illustrations. An end note gives historical background, more information about pok-a-tok, as well as descriptions of the illustration technique.

Juan Bobo Goes to Work (Puerto Rico). As I was reading this book about Juan Bobo ("Simple John") it awakened memories of a similar western folktale and, yes, there is a series of "Foolish Jack" stories rooted in Europe, but I still haven't been able to recall the book I read long ago. Anyway... Juan Bobo carries on the tradition of stories about well-meaning but rather dim heroes who come by their rewards purely by accident. Juan Bobo carries out a series of tasks for the local farmer and merchant in an effort to earn some money for his mother. Fortunately, both his mother and his employers are extremely patient. When Juan inadvertently cures a local rich girl of her blues, all is well and he and his mother can look forward to a good ham dinner at least once a week (and isn't that all what we really want, anyway?).

The Magic Bean Tree (Argentina/Quechua).  Drought has come to the pampas because the Great Bird of the Underworld sits on top of the carob tree, blocking the people's prayers for rain from reaching the Life Giver. A young boy, Topec, takes it upon himself (with the help of the villagers) to scare away the bird. The magic tree then rewards the people with an abundant supply of beans. I enjoyed this story, but I do have to wonder at the use of the carob tree, which is indigenous to the Mediterranean region and not to South America.

Love and Roast Chicken (Andes Mountains). This is a hilarious trickster tale featuring a wily guinea pig named Cuy. In an effort to avoid being eaten by Tío Antonio the fox, Cuy manages to convince him that he needs to brace himself under a rock in order to keep the sky from falling. Thus, Cuy sets into motion a series of tricks until Tío Antonio decides the only way he can avoid Cuy's tricks is to keep far away from him. This book (like all trickster tales) was a favorite of my 4 year old.

Martina the Beautiful Cockroach (Cuba). Yes, I am encouraging you to read a book about a cockroach; it surprises me as much as it does you. Martina, having reached the ripe old age of 21 days is ready to get married. As her suitors line up, her grandmother gives her a bit of advice: spill coffee on their shoes because the only way to discern their true characters is to see them when they are angry (good advice for humans, too). One by one, each suitor fails the test, until no one but a sweet little mouse is left. Although the illustrations were not quite my taste, the story was charming.

The Bossy Gallito (Cuba). This is a cumulative folktale that reminded me quite a bit of Ken Brown's The Scarecrow's Hat. El Gallito (the Rooster) is on his way to a wedding and when he stops to eat two muddy kernels of corn he tries to convince the grass to clean his beak. The grass refuses and so El Gallito requests help from a goat, a stick, fire, and a stream but to no avail. Finally he gets the relief he needs from the sun.

Do you have any Latin American folktales to recommend?

Don't forget! I have a new book list every Monday, and don't miss all my folktale lists:
African Folktales
Folktales from India
Native American Folktales
Celtic and Irish Myths & Legends

Subscribe to our newsletter and as a thank you, receive 10 waiting games kids can play anytime anywhere.
Your email will *never* be shared or sold to a 3rd party. Click here to view our privacy policy.
« 10 Peanut Butter Sandwich Ideas
Our Favorite New Picture Books of 2013 (Part 2) »
5692 shares