I am so excited for this Early Chapter Books for Kids book list series!  I am hopeful that it will be of great use to parents with children in the 6-10 age range. However, some of the books are great for 5 year olds, who are early readers, too. 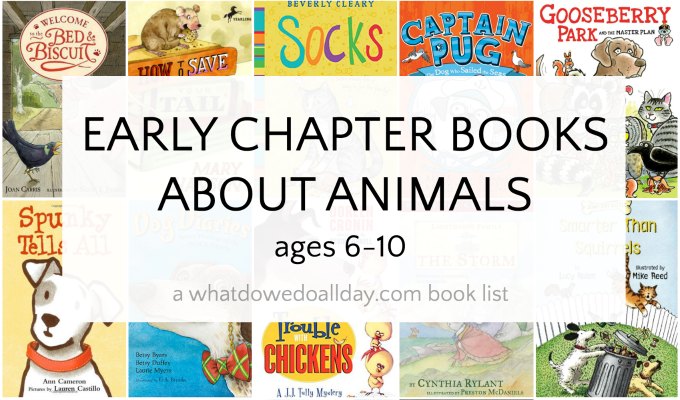 If your child is ready for an "early chapter book" he will have graduated out of the easy reader section of the library, but is finding typical "middle grade" chapter books too difficult for independent reading.

I also have a list of tips to find early chapter books and. If you are new to this blog, you will also find my list of 50+ Chapter Books to Read Aloud to Preschoolers very handy for this reading level. Many of those books are appropriate here, but I am avoiding too much duplication between the lists.

The following early chapter books either have animals as the main narrative characters, or have a strong animal theme. (Note: Book titles are affiliate links.) 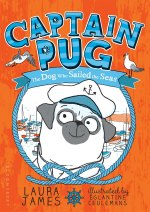 Captain Pug (series) by Laura James, illustrated by Églantine Ceulemans. A quirky and humorous series about a pug who lives with the charming Lady Miranda. The pair are off on a boating adventure, but poor Captain Pug highly dislikes the water, much preferring a tasty jam tart. Pug gets lost during the adventure, hatches a plan to be found but must overcome his fear in order to for his plan to work. 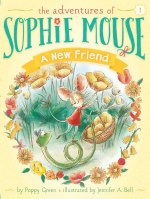 The Adventures of Sophie the Mouse (series) by Poppy Green, illustrated by Jennifer A. Bell. A very sweet and wholesome early chapter book series about a friendly mouse who lives and goes to school in Silverlake Forest. 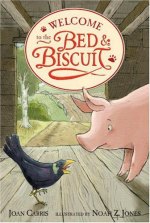 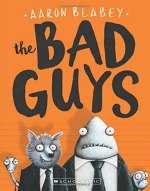 The Bad Guys (series) by Aaron Blabey. (Graphic novel, chapter book hybrid) I read the first book in the series out loud and my 8 year old and I could not stop laughing! He subsequently gobbled up the next two books on his own. Mr. Wolf is on a mission to change his reputation and convinces his fellow reprobates, Mr. Snake, Mr. Piranha and Mr. Shark to join him in the Good Guys Club. Their first mission is to free 200 dogs from the Maximum Security City Dog Pound! Absolutely hilarious and extremely silly in the very best way. 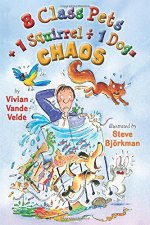 8 Class Pets + 1 Squirrel ÷ 1 Dog = Chaos by Vivian Velde, illustrated by Steve Björkman.
The story begins when a dog chases a squirrel into a nearby elementary school. The squirrel runs from classroom to classroom leaving chaos in its wake. Each chapter is narrated in the first person by the various class pets that inhabit the classrooms. The pets range from hamsters to snakes to fish to birds and getting their different perspectives on the ruckus is extremely entertaining to say the least. There's now a sequel! Squirrel in the House. 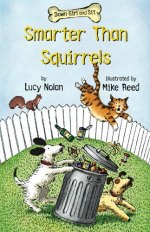 Down Girl and Sit (series) by Lucy Nolan. I found this series, narrated from the dog's point of view (she thinks her name is "down girl" since she hears it from her master so often) quite amusing. Want to introduce your child to the concept of "dramatic irony" (i.e. when the reader knows more than the main character)? Start with this series. 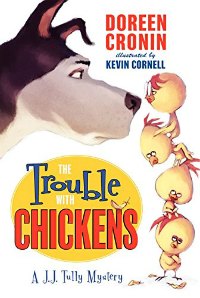 The Trouble with Chickens: A J.J. Tully Mystery (series) by Doreen Cronin, illustrated by Kevin Cornell. This series, inspired by hard-boiled detective novels, is perfect for kids who love tongue in cheek humor and mysteries. J. J. Tully is a retired search-and-rescue dog but when two plucky chicks promise him a cheeseburger in return for his help finding their missing siblings, he can't resist. Be sure to read the spinoff books centering around the chicks: The Chicken Squad. 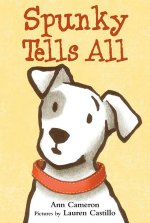 Spunky Tells All by Ann Cameron, illustrated by Lauren Castillo. A truly delightful tale. Spunky contemplates the eternal mysteries of Humans, like why they know nothing of "Smellody" and how erasing is the most important part of homework. But when the family gets a new pet, Spunky forms an unusual friendship. Includes illustrations by the wonderful Lauren Castillo. 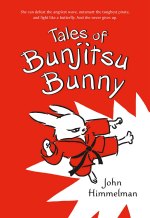 Bunjitsu Bunny by John Himmelman is composed of short vignettes about Isabel (the "Bunjitsu Bunny) and her friends (who also study martial arts). Each clever and funny vignette conveys a zen like lesson without being at all preachy. My then-6 year old was very into the idea of battles and fighting (Yes, I know!) so he of course wanted me to read a book in which the first action sequence involved head butting a door (they don't actually get that far...) but I was delighted with the "sneaky" lessons in non-violence, friendship, compassion and self-discipline! 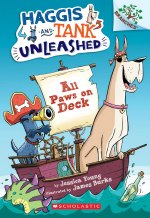 All Paws on Deck (series) (Graphic novel, chapter book hybrid) by Jessica Young, illustrated by James Burks. I was slightly skeptical about this series but my 7 year old was laughing his head off and so I picked it up and found the word play to be quite humorous. I’m a big fan of word play as a literary device; I think it gives kids a greater understanding of vocabulary. Haggis the scottie dog plays the straight man to Tank’s absentminded goof and together they set sail on an imaginary venture. This series, which is a graphic novel-hybrid, is a great choice for reluctant readers. 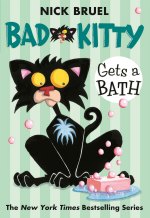 Bad Kitty Gets a Bath by Nick Bruel. This is a popular series and I never thought I would like it until I actually read it and laughed quite a few times. It's garnered all sorts of praise from professionals. It's heavy on the illustrations, making it a good choice for reluctant readers and includes lots of facts woven into the text, which will appeal to non-fiction lovers. 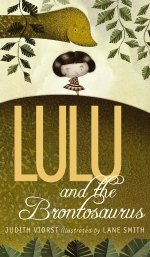 Lulu and the Brontosaurus by Judith Viorst. Quirky is the name of the game for these two books about a gimme-gimme-gimmie girl who learns some valuable lessons about sharing and putting others before herself. Viorst's (author of Alexander and the Terrible, Horrible, No Good, Very Bad Day) hilarious text is accompanied by great illustrations by Lane Smith. These books also make terrific read alouds, especially if -- like me -- you are into dramatics. 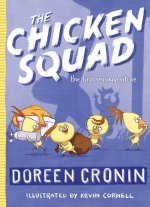 The Chicken Squad by Doreen Cronin, illustrated by Kevin Cornell. A funny series about Dirt, Sugar, Poppy, and Sweetie, chicks with varying degrees of intelligence who solve backyard crimes that inevitably involve the squirrel population. 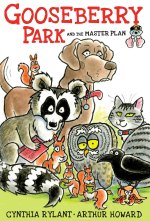 Gooseberry Park and the Master Plan by Cynthia Rylant, illustrated by Arthur Howard. This is a companion book to the wonderful Gooseberry Park novel, but written for younger readers. We adored both books. In this title, the colorful cast of characters ban together during a drought and come up with a plan that involves  a cat, a possum, a raccoon, 200 owls, and 20 packs of chewing gum. 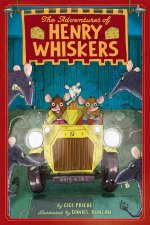 The Adventures of Henry Whiskers (series) by Gigi Priebe, illustrated by Daniel Duncan. The Whiskers mouse family lives under The Queen's Dollhouse in Windsor Castle. When the dollhouse undergoes renovations, Henry's sister goes missing and Henry is off on an adventure to find her! 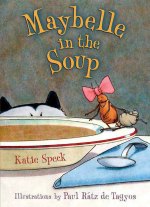 Maybelle in the Soup (series). I realize you think you could never love a book (much less a series) about a cockroach. But I dare you to take the challenge. Maybelle and her comic addiction to yummy food will win you (and your kids) over. 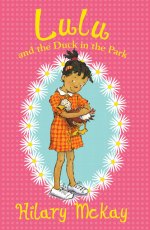 Lulu and the Duck in the Park (series) by Hilary McKay, illustrated by Priscilla Lamont. I really loved this sweet and funny story about Lulu, an animal lover who, unable to leave an abandoned duck egg in the park, hides it under her sweater and brings it to school. 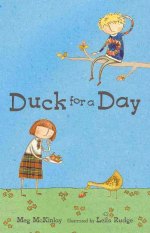 Duck for a Day by Meg McKinlay, illustrated by Leila Rudge. I highly recommend this extra-delightful story. Two classmates, Abby and Noah, vie for the opportunity to take care of the class pet: a duck named Max with some usual requirements. 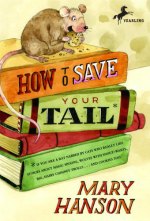 How to Save Your Tail*: *if you are a rat nabbed by cats who really like stories about magic spoons, wolves with snout-warts, big, hairy chimney trolls . . . and cookies, too by Mary Hanson, illustrated by John Hendrix. How's that for a book title? Castle-dwelling, book-and-cookie-loving Bob the Rat extricates himself from all sorts of trouble with his talent for telling fractured fairy tales. 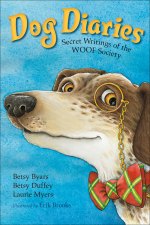 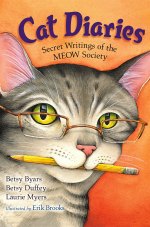 Dog Diaries: Secret Writings of the WOOF Society by Betsy Byers, Betsy Duffey, and Laurie Myers illustrated by Erik Brooks. A Bank Street book of the year. A diverse group of dogs from all over the globe gather together practice their doggie storytelling skills. Or if you prefer felines, try the companion book, Cat Diaries: Secret Writings of the MEOW Society. (Tip: Byers is an excellent source for early chapter books.) 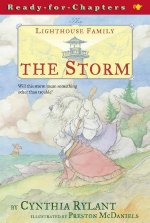 The Lighthouse Family (series) by Cynthia Rylant, illustrated by Preston McDaniels. Rylant's use of language in this charming series harkens back to back to classic children's literature (think: Beatrix Potter and Kenneth Grahame) and when the stories end you are sure to feel all cozy and secure. 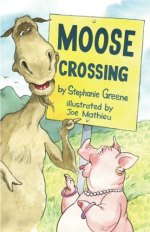 Moose and Hildy (series) by Stephanie Greene, illustrated by Joe Mathieu. A moose and pig may seem like unusual pair of best friends, but these humorous stories will keep your kids reading in this animal early chapter book. 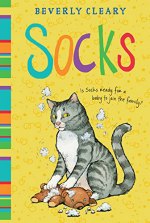 Socks. Socks narrates his own tale of life after a new baby enters his previously quiet home. It's hard to go wrong with Beverly Cleary. Dog fans can pick up a copy of Ribsy. We also adored the audiobook! 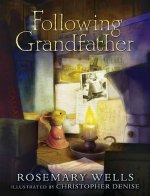 Following Grandfather by Rosemary Wells, illustrated by Christopher Denise. A touching story about a girl mouse who loses her grandfather and her journey towards coping with his absence.

Or, see all my early chapter book lists here. 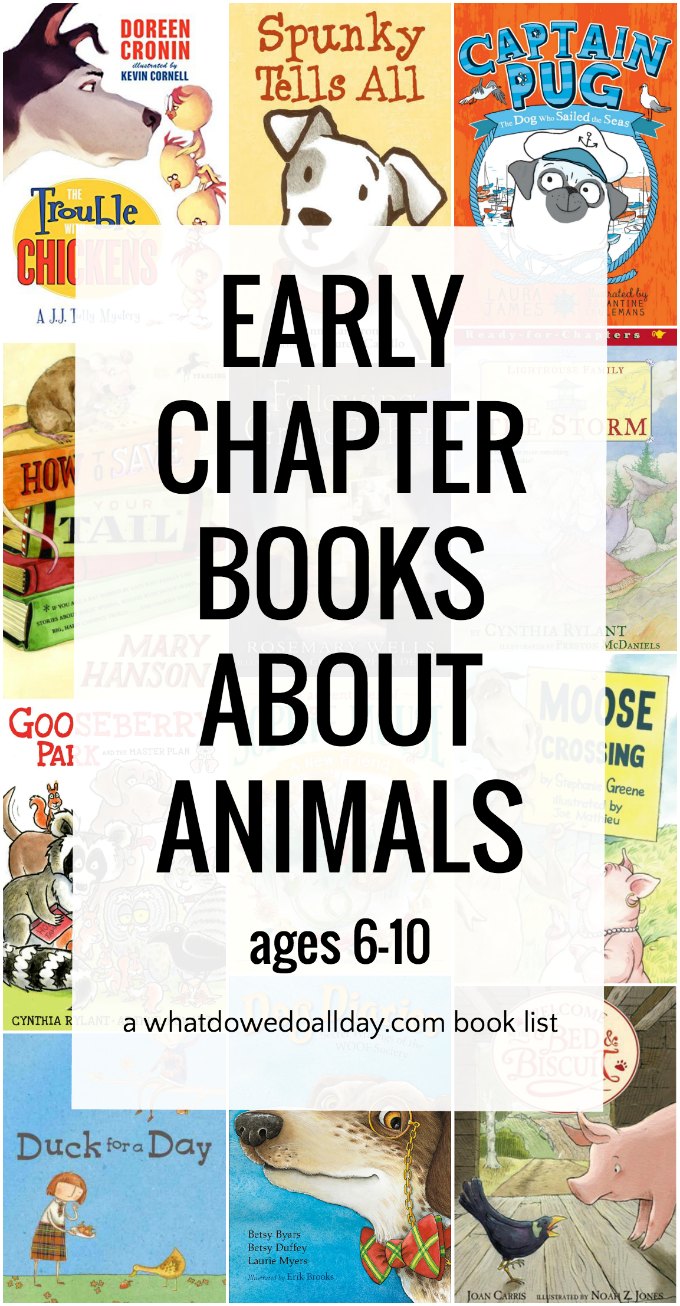 Subscribe to our newsletter and as a thank you, receive 10 waiting games kids can play anytime anywhere.
Your email will *never* be shared or sold to a 3rd party. Click here to view our privacy policy.
« How to Spend Dinner Time Without Asking "How Was Your Day?"
Peace, Love & Kindness Bookmarks: A Coloring Page »
7467 shares