I've been wanting to add to my series of book lists featuring early chapter books for kids for quite some time now, but couldn't figure out a theme -- until I hit on the idea of adventure books. My youngest son loves lots of action with heroic (and funny) protagonists so an adventure early chapter books list seemed like just the thing. (See our adventure picture books, too!) 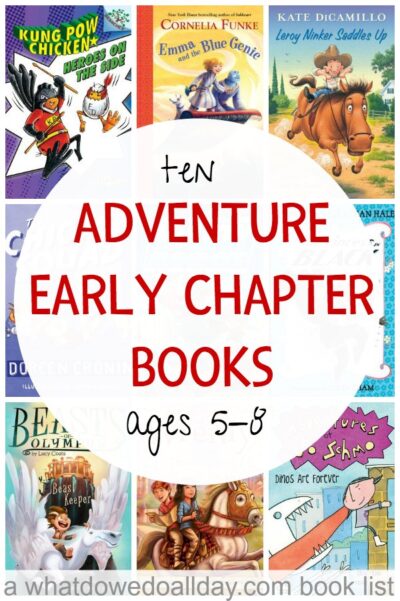 My 6 year old is an emerging reader, still working on very easy, easy readers. However, most of these books I've read aloud to him, and of course, my 4th grader reads nearly every book that comes into the house.

This list of beginning chapter books is aimed at kids ages 5 to 8 who have moved beyond so-called easy readers but are not yet ready for middle grade fiction. Needless to say, every child is different, so use your judgement when helping your child choose books that are right for him or her. My parent tips to choosing early chapter books may come in handy if you need assistance.

For further reading (pun!) check out the following:

Whew! That should keep you covered for a while. (Note: all book covers and titles are affiliate links.)

The Princess in Black is the much anticipated early chapter book series by the author of Princess Academy. Princess Magnolia's secret identity has her fighting the local monsters when they harass the shepherd's charges. Tongue in cheek humor, color illustrations, spare text and a bit of action make this a great book for early readers. When the shepherd decides to create his own alter ego, we know we will be getting a sequel.

Leroy Ninker Saddles Up: Tales from Deckawoo Drive (series) I don't know how I missed this new book from the author of Mercy Watson. Fans of Mercy should note that the Leroy books are longer and have fewer pictures, so they are great for kids who have finished the Mercy books and want something a step up. With all of DiCamillo's trademark humor, Leroy and his spaghetti-loving horse, Maybelline, charge into Deckawoo Drive. Great fun.

Emma and the Blue Genie has full color pictures but the text is smaller than that of most of the books on this list, so I'd put it on the more challenging end of the early chapter book spectrum. One night, Emma finds a bottle, but the blue genie inside has lost his ability to grant wishes. Emma agrees to help him and they set off to find the yellow genie who stole his magic nose ring. This turned out to be a good read aloud for my 6 year old, as well.

Beasts of Olympus. (series) My 6 year old is really into superheroes (really into them) and somehow it sparked an interest in Zeus. (I'm not sure how, exactly...)  Anyway.... I brought home this short chapter book to see what it was all about and he immediately wanted to read it. Demon (short for Pandemonium) is the son of Pan, who sets him up with a job looking after mythical beasts on Olympus. Hera (who my son found quite scary, and she is a pretty scary lady, if I do say so myself) brings her injured Hydra to stables. Demon must find the cure, with the help of some dryads, or face Hera's wrath. UPDATE: We started reading the second book, Hounds of Hades, and both my son and I deemed it too scary, so it's not for sensitive kids.

The Adventures of Jo Schmo (series). When she gets a mysterious package, (conveniently labelled "mysterious package for Jo Schmo"), a fourth grade girl joins the family business of crime fighting. Because Jo is a 4th grader, this is a good series to hand to older kids who are still working on their reading skills and may not want to read book that "are about little kids", as many early chapter books are.

The Chicken Squad: The First Misadventure  (series) is an spin off of J.J. Tully Mystery series (found on our list of mystery early chapter books ). We read the second book first, and it was one of my son's best books of the year in 2014. We've since read the first book in the series about Dirt, Sugar, Poppy, and Sweetie, chicks with varying degrees of intelligence who solve backyard crimes that inevitably involve the squirrel population.

Kung Pow Chicken straddles the line between graphic novel and chapter book. My 6 year old LOVED this series and demanded I check all of them out of the library. It is the type of book, however, that has me wishing he would hurry up and learn to read already. In fairness, though, the puns did have me giggling. A young chicken gains superpowers when he accidentally falls into a mysterious vat in his uncle's lab in their home town of Fowladelphia (see what I mean?). In this first adventure, he and his sidekick must figure out what is causing the local population to lose their feathers. Silly and fun.

The Kingdom of Wrenly. This series is good for kids who like fantasy. I probably would have loved it as a kid, even though I found it a bit unsophisticated. However, the series has loads of fans, and I'm for anything that gets kids reading. Lucas is a reluctant prince. He'd rather dress in peasant clothes and hang out with the village children. He makes friends with Clara, the daughter of a seamstress and the two team up to find the queen's missing emerald. Lots of traditional fantasy elements like fairies, wizards, mermaids will appeal to kids who like imaginative worlds.

Melvin Beederman Superhero (series). Melvin has just graduated from the Superhero Academy and now on the job fighting crime in Los Angeles. He teams up with third grader, Candace, he thwarts the McNasty Brothers and their evil plots. This was also one of my son's favorite series.

Ricky Ricotta's Mighty Robot. Dav Pilkey's fun series has a new look with full color illustrations from this year's Caldecott award winning illustrator Dan Santat. We still have the old version, with it's black and white drawings.  My older son read this series many years ago and I just read the first book out loud to my 6 year old. Ricky and his new robot friend chase bullies and defeat the local evil scientist Dr. Stinky. There are only a few sentences per page and a fun "flip-o-rama" feature to break up the reading for kids who might find extended reading a new challenge.

DONT' FORGET! You can find all my book lists indexed here --> Books for Kids

Subscribe to our newsletter and as a thank you, receive 10 waiting games kids can play anytime anywhere.
Your email will *never* be shared or sold to a 3rd party. Click here to view our privacy policy.
« Math Books for Preschoolers
The Giant Hug: a Family Valentine Craft and Book »
17063 shares