If you have a child who loves to run, jump and score, then he or she will enjoy reading these early chapter books with a sports theme. I was able to find books about the "big four"—soccer, baseball, basketball and football—as well as swimming, running, gymnastics and more. There is something for everyone (no curling books though, I'm afraid). 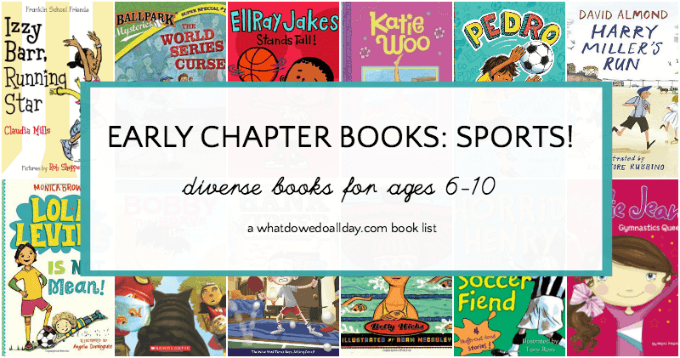 I'm pleased that I was able to include so many diverse choices, books featuring characters of color and from different walks of life. Plus, there are books about both girl and boy sports stars because sports books are not just for boys! I even added a few favorite sports themed easy readers at the end of the list.

I define "early chapter books" as books appropriate for kids ages 6-10—readers who have moved passed Frog and Toad but not ready for Harry Potter. I have two dozen lists for parents looking for these types of beginning chapter books. Find them all here in my early chapter books archives.

Hockey Night in Kenya by Danson Mutinda and Eric Walters, illustrated by Claudia Dávila. There are not many books set in modern day Africa and this one about boys dreaming of playing ice hockey is an inspiring read for your sports-crazy kid. Two boys, Kitoo and Nigosi, learn about Canadian ice hockey from a book they check out from the library and they are determined to play, despite the lack of snow and ice in their home country. It's a wonderful, positive story about friendship and perseverance.

Lola Levine is Not Mean by Monica Brown, illustrated by Angela Dominguez. I really like the Lola Levine series, and this is the first book in the series. Lola loves to play soccer but is distressed when she accidentally hurts a classmate and the other kids start to call her "Mean Lola Levine." Lola figures out a plan to change everyone's mind and show them that she is really a nice person and good friend.

The Gold Medal Mess (MVP series) by David A. Kelly, illustrated by Scott Brundage. This new series features a diverse group of five friends. In this first installment, the kids are prepping for their school's field day. Kelly also authored the Baseball Mysteries series (see below) so as you might expect, the kids bump up against a mystery to be solved: someone is trying to sabotage the events and the kids need to find out who it is. Kelly has written all kinds of sports books for kids: plug his name into the library catalog and check them all out.

Bobby the Brave (Sometimes). (2 book series) Bobby Ellis-Chan struggles the fact that he is not interested in football even though his dad is a retired professional. "The Freezer", as his dad is known, is now a stay-at-home dad and while the siblings have their usual back-and-forths, it is a functional, loving family.  This is a funny, charming book with non-stock characters and I'm looking forward to reading more books in the series.

Pedro's Big Goal (series) by Fran Manushkin, illustrated by Tammie Lyon. This is a great series for the youngest readers, Kindergarteners through 2nd grade who are already ready for chapter books. In this one, Pedro plays soccer and decides that his goal is to.. well... make a goal!

Izzy Barr, Running Star by Claudia Mills, illustrated by Rob Shepperson. I've recommended The Franklin School Friends series before. Each book centers on one student and his or her special skill, from reading to math and in this case, running!

Horrid Henry and the Soccer Fiend by Francesca Simon, illustrated by Tony Ross. This British import is funny and rather charming, really, despite the name "Horrid Henry." Ever the clever troublemaker, Henry takes on Moody Margaret. Formatted as four separate stories, rather than a traditional chapter book.

Harry Miller's Run by David Almond. There are actually no chapters in this British import. I recommend this long-short story for the upper age limits of this list because of the vocabulary (If your child likes to listen to Roald Dahl, this is an excellent choice). Young Liam is looking forward to the Junior Great North Run and while he his helping an elderly neighbor, Harry Miller, he listens to Harry's memories about his own experiences running. I love the intergenerational aspect of this book, the quirky characters and storytelling. Of all the books on this list, I recommend it most as a read aloud.

My Secret Life as a Ping Pong Wizard (Hank Zipzer series) by Henry Winkler, illustrated by Lin Oliver. Hank takes up ping pong and discovers he really likes it. However, he worries that the other kids will tease him about it. When he gets good and hopes to participate in a competition he has to decide if he will compete even if it means all his friends will find out.

Ellray Jakes Stands Tall by Sally Warner, illustrated by Brian Biggs. Ellray is the shortest kid in school, but his basketball skills are pretty good. But no one seems to notice, so Ellray comes up with a plan!

Kylie Jean Gymnastics Queen by Marci Peschke, illustrated by Tuesday Mourning. The Kylie Jean series is relatively new, and all the books have a positive message. In this one Kylie Jean learns whether sports or friends are more important.

Cartwheel Katie Woo by Fran Manushkin, illustrated by Tammie Lyon. I love the Katie Woo series and so will your kids. Katie gets the gymnastics bug after seeing the sport on TV. But she learns cartwheels are harder than they look.

Swimming with Sharks (series) by Betty Hicky, illustrated by Adam McCauley. Rita wants to improve her swimming skills so she can compete on the same team as her friends. The Gym Shorts series also includes books about track, basketball, baseball, soccer and tennis.

Easy Readers with a Sports Theme

Don't Throw it to Mo by David A Adler won the 2016 ALA 2016 Theodor Seuss Geisel Award. So far there are two Mo Jackson books and I suspect there are more on the way. I read Get a Hit Mo! and both my son and I found it charming. Mo loves sports but he's not necessarily the most talented kid on the team. It doesn't matter, though. His perseverance pulls him through. Both boys and girls will see themselves in Mo, even if their passions lie in a non-sporty direction.

The Littlest Leaguer by Syd Hoff. It’s always good to have a classic on the list so parents can feel nostalgic while helping their kids learn to read. It’s also much, much longer than contemporary easy readers, although it also has a nice story arc to keep kids’ attention span. If you're working on getting the kids to read longer books this story about a small boy with big baseball dreams might do the trick.

Soccer Game! by Grace Maccarone, illustrated by Meredith Johnson. This is a very, very easy reader that will inspire your soccer fan to pick up a book.

More great books for every hobby:

Subscribe to our newsletter and as a thank you, receive 10 waiting games kids can play anytime anywhere.
Your email will *never* be shared or sold to a 3rd party. Click here to view our privacy policy.
« Children Holding Up the Earth Coloring Page
The Key to Ending Tech Tantrums Forever »
1008 shares