You are here: Home / Parenting / The Key to Ending Tech Tantrums Forever
3235shares

Electronics can be useful. Our kids use them for school, for getting driving directions, for face-timing with distant relatives, to look up a vocabulary definitions, to get access to the library catalog and yes, even the occasional video game.

Technology may not the enemy but when your child is having an epic meltdown—the dreaded “tech tantrum”— after being told it’s time to “turn it off,” you’re probably considering the drastic move of tossing all screens out the window.

No need to do that just yet. 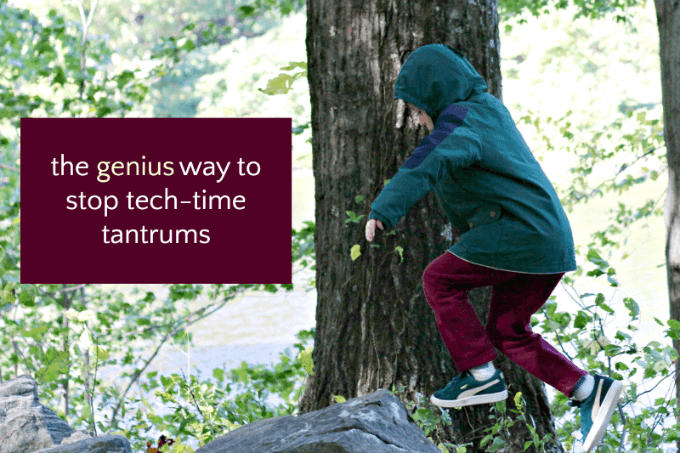 One of the most important points in my four family plans to reduce screen-time is to be 100% consistent about turning screens off when the time is up. BUT, although that strategy will significantly reduce tech tantrums, and it is not the simple trick I am going to tell you about today.

If the following quotes from real parents sounds familiar, then this single, easy-to-implement strategy will change your life:

The thing I struggle with most when coaxing my son off the ipad is that he is not in a good mood after being on it and moans about being tired.

The problem is how to UNplug once she HAS been plugged. All the tantrums begin once I say that it’s enough. It doesn’t help to set the rules in advance. It doesn’t help to set a timer. The moment she is exposed to screen – she wants more of it. And she complains. And in a bad mood. I didn’t try it, but I think that even if I set the computer to log off at a certain time – it won’t help. So she won’t be angry at me, but she will be angry at the world – it’s not fair etc etc.

Guess what? I’m not going to tell you to get rid of screens altogether! Maybe you’ve decided that some screen time during the day is okay; or you and your kid has made peace with screen limits. Maybe he doesn’t even spend all his waking hours whining for screen time anymore. That’s great news!

That moment after the glowing lights have powered down? That’s the tricky part. That’s the moment you dread.  It’s as if his or her brain has powered up, and is in overdrive, all circuits overloaded. It’s meltdown city.

We did one thing which ended the insanity of tech tantrums.

But first, here’s what we didn’t do:

We didn’t give ten or five or two minute warnings.

We didn’t use a parental control app.

We didn’t offer a variety of activities after screen-time.

We didn’t threaten them with punishment. 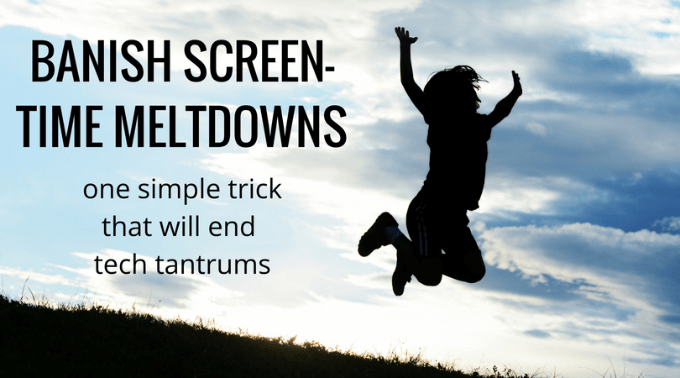 For quite some time, I noticed that when the boys turned off the iPad, their minds could not find a focus. The behavior went beyond the usual whining. They would start physical fights with each other, or screaming, or even throwing their toys.

It was truly horrifying. And it turns out there are quite a few biological reasons for that kind of behavior.

After a while the kids would settle down eventually, totally exhausted, but still completely unfocused.

One day I announced, “After screen-time, you both must immediately run around the block.”

They looked at me like I was cray-cray. (I can’t believe I just used the term “cray-cray”) But I insisted. That’s what moms do.

And they did. They ran around the block, stumbled back inside, had a glass of water and found something with which to occupy themselves.

I did a happy dance.

Power down the screen. Power up the body.

The kids are required to perform the simple task of moving their bodies immediately after powering down. (We also require outdoor time before screen-time, which I highly recommend.)

Now, you don’t have to use “run around the block” but use something that works for you. It could be heading out to the backyard for a bit of soccer practice, doing cartwheels on the lawn, climbing a tree, you get the idea. When the kids seems to have a bit of trouble, my husband takes the lead and gets moving with them. (I’ve designated all screen-time supervisory duties to my husband, bless him.)

DON’T FORGET: GET THE 4 SIMPLE SOLUTIONS TO REDUCE YOUR CHILD’S SCREEN TIME (IDEAS THAT ACTUALLY WORK)

It’s true the weather is not always cooperative… Here are a few indoor ideas for bad weather days:

Tip #1: After the kids power down the screen, you must keep your screen off too.

Tip #2: Make sure they eat before having screen time. Their brains must be on maximum power.

NOTE: I recently came across some research that validated our practice of exercising to avoid screen-time meltdowns and tech tantrums! What Screen Time and Screen Media Do To Your Child’s Brain and Sensory Processing Ability – please note, the article also emphasizes the importance of limiting screen time. Physical activity is only a short term solution, not a solution for unlimited screen time.

Need more help setting screen limits? Try one of these four strategies that actually work (and are easy!) 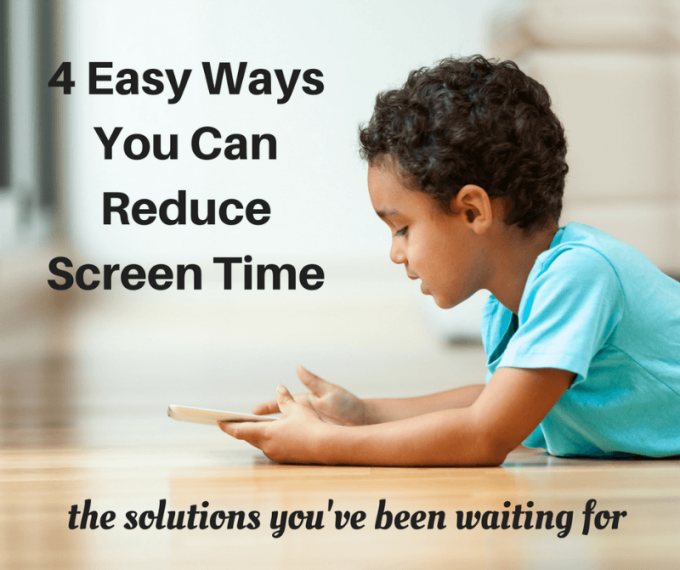 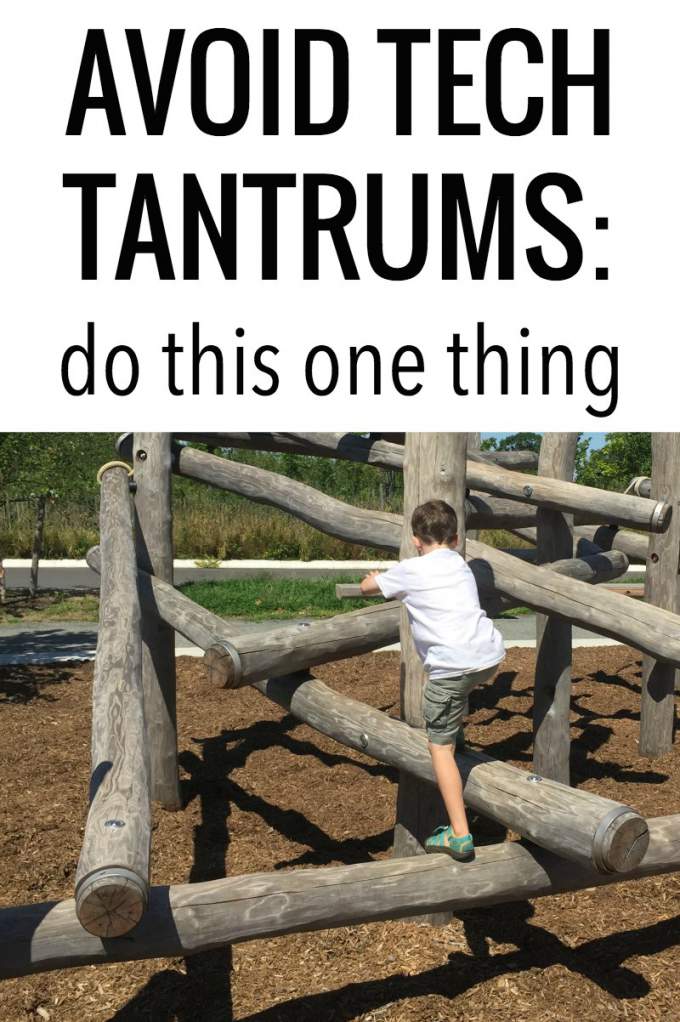 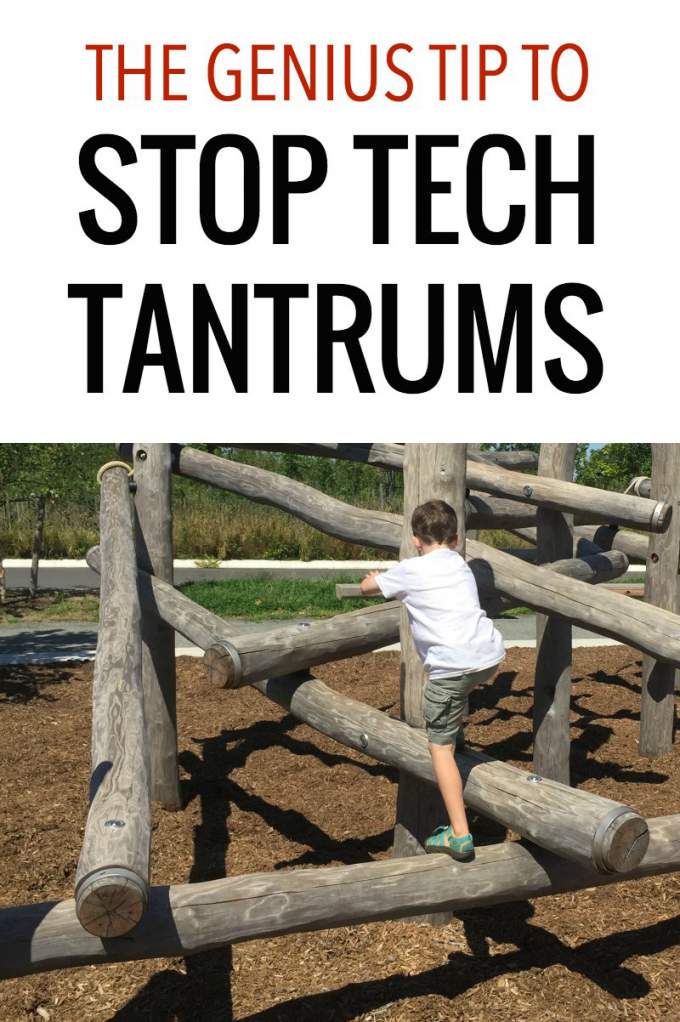 Subscribe to our newsletter and as a thank you, receive 10 waiting games kids can play anytime anywhere.
Your email will *never* be shared or sold to a 3rd party. Click here to view our privacy policy.
3235shares
« Playful Early Chapter Books About Sports
Darling Books about Fairies, Dollhouses & Other Wee Things »