Your little sports fan will love these children's picture books about baseball. In researching baseball books for this book list I was impressed with the size and breadth of the available books. I couldn't possibly include all of the wonderful baseball themed picture books out there on the shelves! I have endeavored to curate a list that includes a healthy dose of diverse books about baseball, biographies, and books which look at the roll baseball has played in the history of America. I've rounded out the list with imaginative fiction books and poetry books. 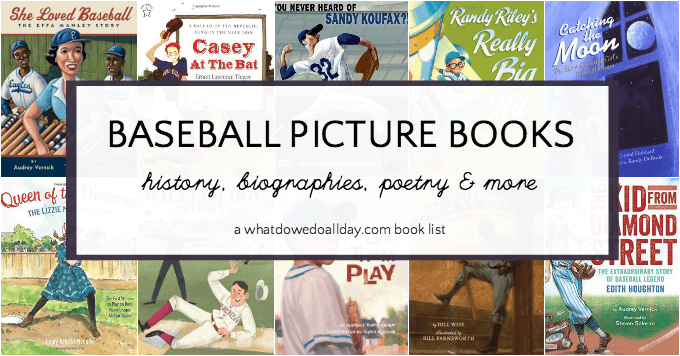 I have three categories below, but there is much crossover among them. Go ahead and scroll through the options or use one of the links below to jump to what you want.

These are fun fiction picture books, (plus one easy reader) great for story time reading.

Max by Rachel Isadora is not only a great book to read if your child thinks ballet is only for girls, but also because it shows kids the benefits of thinking outside the box. Every weekend Max and his sister go to baseball and ballet, respectively. One Saturday, when Max arrives to his sister's class a bit early he finds himself accepting the teacher's invitation to join in. Max loves it and from then on, he attends class with his sister as a way to warm up for his baseball games, where, thanks to a few barre stretches, he hits home runs! 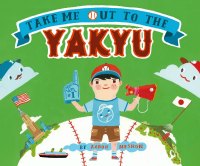 Take Me Out to the Yakyu by Aaron Meshon.  My 8 year old loves to go to ball games with dad and it wouldn’t be summer without a few hotdogs in the stands. Young baseball enthusiasts will love this clever picture book depicting the difference and similarities between American and Japanese baseball.

Clorinda Plays Baseball by Robert Kinerk, illustrated by Steven Kellogg. A hilarious story about an intrepid cow who decides to step up to the plate. This is an overlooked book, but great fun for kids.

The Littlest Leaguer by Syd Hoff. It’s always nice to have a classic on the list so parents can feel nostalgic while helping their kids learn to read. It’s also much, much longer than contemporary easy readers, although it also has a nice story arc to keep kids’ attention span. If you're working on getting the kids to read longer books this story about a small boy with big baseball dreams might do the trick.

There are numerous baseball biography picture books. Plug your favorite hero like Babe Ruth, Hank Williams or Jackie Robinson in the library catalog and you will find some excellent picture books. Here are a few you may have missed! See also the women and girls in baseball books, below.

You Never Heard of Sandy Koufax?! by Jonah Winter, illustrated by Andre Carrilho. Koufax is a hero of my husband and son, so I had to include a book about the star of the Brooklyn Dodgers who fought against discrimination in the Big Leagues. He is well known for refusing to play in the World Series when a game fell on Yom Kippur.

The William Hoy Story: How a Deaf Baseball Player Changed the Game by Nancy Churnin, illustrated by Jez Tuya. Teach your kids the amazing story of how William Hoy refused to let his deafness stand in the way of playing professional baseball.

Louis Sockalexis: Native American Baseball Pioneer by Bill Wise, illustrated by Bill Farnsworth. Sockalexis, a member of the Penobscot tribe, struggled against discrimination in the late 19th century to be accepted as a professional baseball player. This biography follows his childhood and his career before it sadly ended early. Best for ages 6 and up.

Baseball Saved Us by Ken Mochizuki, illustrated by Dom Lee. During World War II, the United States government imprisoned people of Japanese descent in internment camps. Shorty and his father build a baseball diamond in the dusty field of the camp. Shorty uses the game to build his self-confidence and channel his anger at the guards. Despite the baseball theme, this is a serious book. I also think it would be worthwhile discussing this book critically with kids: Did baseball actually save the boys? Was using their anger a productive way to approach their situation? Should assimilation actually be the real goal?

Let Them Play by Margot Theis Raven, illustrated by Chris Ellison. In South Carolina an all-black Little League team became the 1955 champions by default when the white teams in the league refused to play against them. This book is an important reminder that kids are also victims of racism.

Brothers at Bat: The True Story of an Amazing All-Brother Baseball Team by Audrey Vernick, illustrated by Steven Salerno. Can you imagine having 16 children? Yeah, me neither, but if I did, I'd organize them into a baseball team like this adventurous family did (or not).

We Are the Ship: The Story of Negro League Baseball by Kadir Nelson. This book is a fascinating narration of the history of the Negro League, its talented players, the struggle of the teams' owners and the important role the League played in the history of the sport in America. Kadir's text is engaging, and as always, his illustrations will amaze you and draw you into the emotional life of this historical period. Ages 8 and up.

The Bat Boy and His Violin by Gavin Curtis, illustrated by E.B. Lewis. Reginald's father is the manager of a team in the Negro League, but the team isn't doing very well and his father wants Reginald to be a bat boy. But Reginald has other dreams and he fills the dugout with his music, possibly changing the team's luck.

Sports are not just for boys (duh) and sports heroes are not just male. Inspire your sons and daughters with these spirited girls and women who took their destiny into their own hands.

The Kid from Diamond Street: The Extraordinary Story of Baseball Legend Edith Houghton by Audrey Vernick, illustrated by Steven Salerno. In 1922, 10 year old Edith Houghton tried out for—and made the cut with— the Philadelphia Bobbies. This biography not only tells the highlights of Houghton's interesting career (she later became a recruiter) but also includes interesting details that make the story come alive.

Catching the Moon: The Story of a Young Girl's Baseball Dream by Crystal Hubbard, illustrated by Randy Duburke. Marcenia Lyle is  dissatisfied with the career options available to girls. When a recruiter tells her that she can't play ball at summer camp because she's a girl, Marcenia (later "Toni Stone") refuses to take no for an answer.

Players in Pigtails by Shana Corey, illustrated by Rebecca Gibbon. There are a few books out there about the All American Girls Professional Baseball League. I like this one that follows the journey of "baseball-mad" Katie as she decides to try out for the team.

Queen of the Diamond: The Lizzie Murphy Story by Emily Arnold McCully. Lizzie Murphy was the first woman to play in a major-league exhibition game as well as all-star games. I was glad to be able to read a book to the boys in which a woman who broke barriers was supported by the men around her. Lizzie's father encouraged her to play ball, and her fellow players stood up for her when the manager tried to get out of paying Lizzie a fair salary.

She Loved Baseball: The Effa Manley Story by Audrey Vernick, illustrated by Don Tate. Effa Manley is the only woman to be inducted into the Baseball Hall of Fame. She was the business manager of the Newark Eagles, a Negro League Baseball team, which she and her husband founded. She fiercely campaigned for the rights and due recognition for African-American ball players.

Poem Runs: Baseball Poems and Paintings by Douglas Florian. Florian's collection of baseball poems will turn any sports-lover into a poetry nut.

MORE: Children's poets your kids should know and will love

That Sweet Diamond: Baseball Poems by Paul B. Janeczko, illustrated by Carole Katchen. Clever poems about everything baseball and everything remotely related to baseball.

Casey at the Bat by Ernest L. Thayer, illustrated by Patricia Polacco. Wonderful illustrations accompany this classic poem. Challenge your kids to memorize it.

Casey Back at Bat by Dan Gutman, illustrated by Steve Johnson and Lou Fancher. A sequel to the famous poem, with an ending that will surprise you.

More lists for you:

Sports Books for Kids (novels for kids ages 8 and up)

Subscribe to our newsletter and as a thank you, receive 10 waiting games kids can play anytime anywhere.
Your email will *never* be shared or sold to a 3rd party. Click here to view our privacy policy.
« Bust Boredom and Get Smart with Watermelon Chess
Fun Sibling Activities to Stop the Fighting »
954 shares