In order to make this list of books for 12 year olds I decided to poke around my tween's bookshelf to see what he was reading! I can't believe my kid is already 12 years old! I started making these book lists based on what he was reading with 8 books for an 8 year old boy. And now look where we are! 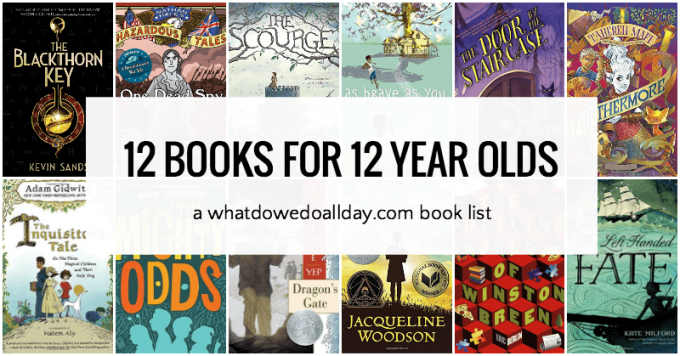 I picked titles on a variety of topics, as I tend to do, and tried to choose books your own 12 year old might not have read yet, but I know will enjoy no matter what their interest! Middle grade books are generally aimed for 8-12 year olds, but I've chosen books in the 10-14 age range (in my opinion).  Plus, there are more lists with books for 12 year olds at the bottom of this post.

Please note: while in general you can be confident that I have read every book I recommend, in this case there are several books on this list which my kid has read, but I have not read yet. However, I chatted with my 12 year old and read professional reviews so I feel very confident recommending them! (Note: covers and titles are affiliate links.)

The Mighty Odds (series) by Amy Ignatow. A bus accident gives a four studenta, an Amish kid, a bus driver and a teacher superpowers ranging from invisibility to teleportation. This diverse group of people must now work together to solve the mystery behind what happened during the accident and how they got their powers. The narration switches among the protagonists so readers get many different viewpoints. My 12 year old told me this book was "great and hilarious!"

Furthermore by Tahereh Mafi. A magical, mysterious modern day Alice in Wonderland. 12 year old Alice is determined to find her father after he disappears from Farenwood. Alice is a bit of a misfit. In a world full of color, she has pure white hair and white skin, and she performs miserably at the magic competition, when all 12 year olds are supposed to display their unique talent. After the competition, Alice and a boy, Oliver, set off on a topsy-turvy, inside-out and upside-down adventure into Furthermore to find and bring back her father.

The Puzzling World of Winston Breen (series) by Eric Berlin. After Winston gives his little sister a puzzle, they both find themselves stumped. They begin a journey to solve the puzzle which leads them on a scavenger hunt which may lead to a load of cash. Readers solve puzzles along with the protagonists, all the while realizing that cooperation is the most necessary ingredient.

The Scourge by Jennifer A. Nielsen. This is a very suspenseful tale by the author of two other series I have not been able to put down (The False Prince and The Mark of the Thief) . When Ani is captured and tested for a deadly disease she is sent, along with her social opposite, to a quarantined colony. While in the colony Ani and her cohorts begin to discover the truth about the supposed disease. They plot escape and hatch a plan to bring the government's deception to light. Thrilling!

The Blackthorn Key by Kevin Sands (trilogy).  There is some dark subject matter in this book but it is an incredibly suspenseful and action-packed read aloud for older kids. (On par with some of the darker imagery in the Harry Potter books). Christoper, an orphaned apprentice in 17th century London must solve a complex puzzle surrounding the murders of apothecaries. Despite the seriousness of the plot, the well-drawn characters provide some humor.

Brown Girl Dreaming by Jacqueline Woodson. Woodson describes her memories of growing up in South Carolina, and later in Brooklyn, against the backdrop of the civil rights movement. The narrative is funny and poignant as Woodson figures out what makes her special and discovers her love words. See all those medals on the cover? This book totally earned every one of them.

Lawrence Yep's Golden Mountain Chronicles is a 10 book series which tells the story of the Young family over many generations and two centuries. Dragon's Gate is set in 1867. Otter has always been in awe of his father and uncle who work for the railroad companies across the sea. When he gets there himself, however, working conditions, the bitter cold, racism and his uncle's behavior serve to disillusion him. You don't need to read the series in order to enjoy them and Yep is a skilled author. Your kids won't want to put the book down.

As Brave as You by Jason Reynolds. Both my kid and I loved this book about 11 year old Genie and his brother who have come to rural Virginia to spend the summer with their grandparents. Genie is a boy who loves to ask questions and when he learns about his grandfather's blindness he has a lot to ask! During the summer Genie struggles with making sure he makes the right decisions as he uncovers the secrets of his family's history.

The Door by the Staircase by Katherine Marsh, illustrated by Kelly Murphy. This is a fascinating novelization of the Baba Yaga folk tale. The suspense will keep your tween turning the pages long into the night. (Try to encourage her to get a little sleep, though.) 12 year old Mary is taken away from her orphanage by the mysterious Madame Z. Madame Z is full of secrets and lives in a curious house. In town, Mary befriends Jacob, a magician's assistant. When they learn the true identity of Madame Z they must work together to escape her power.

Hazardous Tales (series) by Nathan Hale. My kid loves the Nathan Hale's historical graphic novels. The topics range from the Revolutionary War to the Donner Party, the Alamo to WW1 and more. As a narrator, Hale makes history fascinating and funny. If your kids say they aren't "into history" sneak a few of these books into their reading stash.

The Inquisitor's Tale: Or, The Three Magical Children and Their Holy Dog by Adam Gidwitz, illustrated by Hatem Aly. Multiple narrators describe the adventures of several children and their (potentially) holy dog. This book is an amazing mix of morality tale and puzzling mystery. Jeanne with her psychic visions, Willian, a biracial Muslim monk with superhuman skills, and Jacob, a Jewish fleeing his destroyed village who has healing powers come together for an adventure that enriches their lives, as well as the lives of the readers.

The Left-Handed Fate by Kate Milford. Lucy and Max are trying to put an end to the War of 1812 by assembling a mysterious and ancient engine. While on a ship, The Left-Handed Fate, the ship is captured by the Americans and put under the command of a 12 year old, Oliver who must wrestle with the moral decision of becoming a traitor or putting the lives of others in jeopardy. Full of high adventure, treacherous journeys and suspenseful action, this book will keep your tween on the edge of his seat.

Subscribe to our newsletter and as a thank you, receive 10 waiting games kids can play anytime anywhere.
Your email will *never* be shared or sold to a 3rd party. Click here to view our privacy policy.
« Peace Coloring Page
Game of the Month: Frog Juice »
30134 shares