I read and share so many excellent contemporary books for tweens, but  I still hear from parents who want their kids to read the classics. But most tweens are not ready for Dickens or George Orwell! So, what are some good classic books for tweens?

Although the word "tween" is a new-fangled one, kids ages 8-12 can certainly appreciate a classic book.  And what defines a "classic" book, anyway? I've decided, for purposes of this tween book list, that all books must be older that me (!). That is completely arbitrary, and since I've called books from the 1990s "classics", I make no claims for consistency. But there you have it.

Do some tweens resist classic books because they perceive them as boring? Well these classic books for tweens are everything but boring! I included some titles your children will most certainly recognize, but also a few which may even be new to parents! I also made sure to include a lot of humor, but you will find realism and even science fiction, as well. If your 8-12 year old doesn't want to pick up a classic book on his or her own, why not try reading one of these aloud?

For tweens who read voraciously be sure to check out all of my  middle grade book lists and especially the books on my book list series,  classics through the 20th century. (Note: all titles and covers are affiliate links.)

The Egypt Game (1967). My son loved this book (as did I). A group of friends hang out near an old curio shop and engage in some imaginary world building. Mysterious and suspenseful, it will be especially loved by kids who like all things Egyptian.

Chitty Chitty Bang Bang: The Magical Car. (1964) Do not judge a book by its movie! This humorous tale by the author of James Bond is great fun. The crazy Pott family purchases a car that can fly as well at catch criminals. Perhaps not as deep and meaningful as some of the other books on this list, but tweens don't need every book they read to change their views on life!

The Little Prince. (1943) I remember reading this book for the first time when I was in 3rd grade, which may be a little young. I think tweens are at a good age to start thinking about the wider philosophical ideas presented in this classic book about a prince who finds himself on a strange new planet.

The Children of Green Knowe. (1954) Tolly goes to live with his grandparents in their ancient but magical English manor house. He meets a few new playmates to keep him company. He discovers, however, they are not quite of this world. There are six Green Knowe books to keep your kids reading.

The Betsy-Tacy Books. (1940) Not just a classic book for twee girls! These tales of three friends in early 20th century Minnesota will appeal to kids who love history. If you find your kids are constantly reading fantasy books (nothing wrong with that!) add a little variety with these books. Tweens often want to read books about teens and they can read all the way through Betsy's teen years without parents having to worry that their kids are reading YA material that is not quite appropriate yet.

Roll of Thunder, Hear My Cry (1976). Told from the perspective of a nine year old girl, this is an incredibly powerful book about an African-American family who struggles against racism in the South in their fight to keep their land and their dignity. If I were to make a list of books all children in the US must read, this one would be on it.

Wolf Story (1947) may be a new-to-you classic book, and I hope you will encourage your tween to give it a read. Five year old Michael wants his dad to tell him a story about a wolf, and a hen named Rainbow, but as five year olds will do, he keeps interrupting to instruct his dad on the story details. A humorous short novel which is also great for reading aloud to younger kids.

The Hundred Dresses. (1945) Eleanor Estes’ 1945 book deals with bullying, poverty and courage. A classic, moving story that should be on everyone’s shelves.

The Secret Garden (1911) is a timeless tale about how a sullen 10 year old girl, sent to live with her uncle in Yorkshire, discovers a walled garden which changes her life and those around her. This has been on my to-read aloud list for quite some time, but I also hope to get my almost 10 year old to read it independently.

The Boxcar Children (1924, but has been re-written). This is usually recommended as an early chapter book, but not all kids read advanced level books when they are 10 years old, and the Boxcar series mysteries are appealing. This is still an enormously popular series today, but you many not realize that the first book was written in 1924! Four orphan siblings try to make an independent life for themselves by living in an abandoned train car. There are now more than 100 books in the series (!).

The Family Under the Bridge (1958) At Christmas time in Paris, Armand, a self-proclaimed hobo who loves his responsibility-free life, takes a homeless family under his protection. In doing so he decides it might not be so bad to have permanent ties after all. This sensitive, touching story is a great read during the holiday season.

A Wrinkle in Time (1962) was a favorite of mine as a kid. It is part of a trilogy, yet I can't really recall the plot of the other two books! The mix of fantasy, science fiction and mystery is a perfect combo for tweens. Meg's father has gone missing after working on a secret government project. Meg, her genius brother, Charles Wallace and a school friend are transported through the tesseract, in an attempt to find her father.

The Witch of Blackbird Pond (1958). 16 year old Kit leaves her home in Barbados, only to find herself smack in the middle of Puritan New England and a life that is very different from her own. Kit later becomes a target of the villagers' fear and is accused, along with her friend, of being a witch. This book is perhaps best for older tween, and is a great way to start a conversation about tolerance, social pressures and compassion. 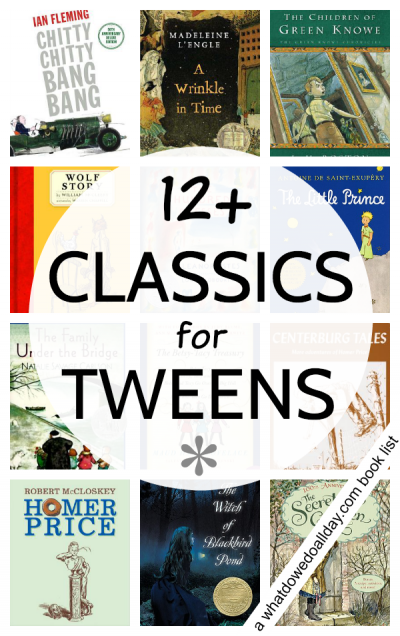 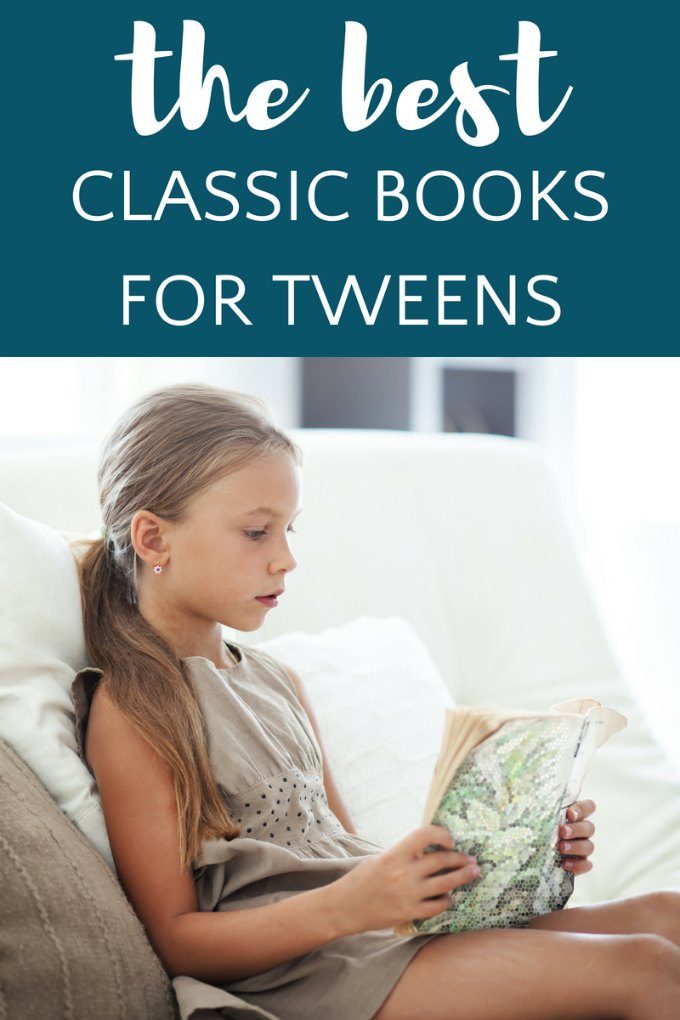