It started with 8 books for 8 year olds, and now we are on to 11 books for 11 year olds! My how time flies. This is a book list of titles my son has recently read and to which he has given the thumbs up. Unlike my other book lists, I haven't necessarily read each of these books, but I talk to my son about how much he enjoyed the books and why. Often he reads books that I have checked out of the library for myself but as he has more free time than I do, he ends up reading them first! 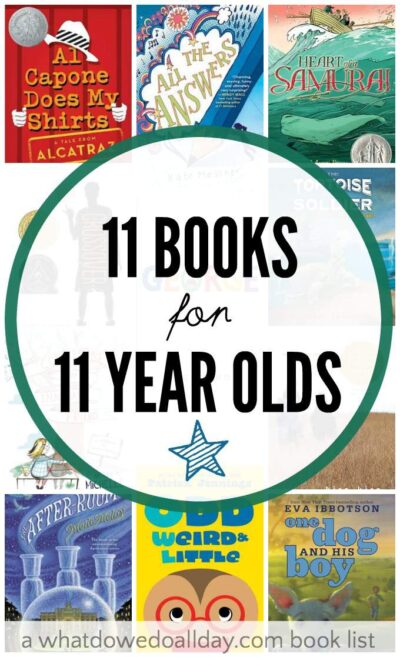 Although I call this a list of books for 11 year olds, these titles can be enjoyed by kids in the upper grades as well. What is your 11 year old reading these days?

Kira-Kira. Cynthia Kadohata is the author of The Thing about Luck, which I included on my list of books for kids who like Little House on the Prairie. This book was assigned reading for my son last year in 4th grade and he wrote a wonderful (if I do say so myself) report on the book with several other kids in his class. In the 1950s Katie and her family move from Iowa to Georgia, where there are very few other Japanese-American families. Katie's parents work horrible jobs in a chicken processing factory and when her sister Lynn becomes ill, things go downhill fast. Through the difficulties, Katie focuses on Lynn's ability to see "kira-kira", a word that means the sparkling, glittering moments of life. My son did warn me that this book is "sad but makes you think".

The After-Room (The Apothecary Series). I've written how my son and I have both enjoyed The Apothecary series, and now my 11 year old has read the final book in the trilogy. His response, "You HAVE to read this mom. I'm not going to tell you what happened anymore." (He had been telling me the plot chapter by chapter.) Of course you must read the first two installments in the series first, and I first introduced you to the trilogy on my list of books for Percy Jackson fans, so head over there to learn more.

Heart of a Samurai. I started reading this book but it was snatched from my hands by my son who gives it a big thumbs up. It is an adventure story, inspired by historical events. In 1841, 14 year old Manjiro and 3 other men are stranded on an island off Japan during a fishing trip. Eventually they are rescued by an American whaling vessel but instead of returning to Japan, Manjiro travels with the Captain, attends school in America - dealing with the prejudice that comes with being an outsider - and heads to California during the gold rush. At the time, Japan was cut off from the world, and no one was allowed back into the country after leaving, but Manjiro risks his life to return.

One Dog and His Boy. I originally checked this book out with the plan of reading it aloud. That hasn't happened yet, but my son picked it up and declared it a good read, "funny and not sad." He wasn't in a forthcoming mood when I was quizzing him about the story, but you should know that it is by great British children's author Eva Ibbotson, and is the last book she wrote before she died a few years ago. The story follows Hal, whose parents finally get him the dog he has always dreamed of. When he realizes that Fleck (the dog) must be returned to the rent-a-dog agency, he is determined to keep him and comes up with a plan to run away with Fleck to his grandparents.

Al Capone Does My Shirts by Gennifer Choldenko is just plain good fun. The year is 1935 and 12 year old Moose and his family move to Alcatraz after his father gets a job there. Moose’s older sister is autistic and their mother attempts to get her into a special school while Moose gets wrapped up with crazy money-making schemes dreamed up by the warden’s daughter. This is fast-paced, realistic fiction that has big heart and big humor.

All the Answers. I've had this book in my to-read pile forever, so of course my son got to it first. Kate Messner is a solid and dependable author, whose picture and chapter books I have recommended many times over the years. Ava finds a old blue pencil, and while taking a math test, she discovers that the pencil can answer any factual question posed to it. Ava then harnesses the power of the pencil (which turns out to be imbued with her grandmother's spirit) to help her grandfather and her mother. My son declared this book, "very interesting."

The Crossover. Kwame Alexander’s wonderful verse novel about twin brothers is touching, relatable and extraordinarily engaging. Josh narrates his story of coming to terms with his brother’s new girlfriend, sibling rivalry, the pressure and joy of playing ball and his relationship with his father. This book does have a sad ending and I recommend it for kids ages 10 and up.

George. George is a girl, but everyone thinks she is a boy. She is worried no one will know who she is and she will stay hidden forever. She dreams of playing Charlotte in the school production of Charlotte's Web but the teacher won't even consider her for the part. George confesses her secret to her best friend, who helps her concoct a plan. This is a quiet gem of a book and I am impressed at how accessible the text is for the intended audience. George is a fifth grader and the story is not overcomplicated or bogged down with social and political backstory or controversy. While many might dismiss this book (which would be sad), or embrace it solely because of George's transgender identity it is much more than just an LGBT story. All kids are familiar with keeping secrets and worrying about being accepted by others. This is a moving and hopeful story.

The Tortoise and the Soldier: A Story of Courage and Friendship in World War I. My son enjoyed this book so much he read it twice. It has gorgeous illustrations and is not a very long read, so use it to entice so-called "reluctant readers". Parents should know that since it is a war story there is difficult, though age-appropriate, material. It is based on the true story of Henry Friston, who served in the British Navy during World War I. While rescuing others at Gallipoli, he finds a tortoise, who becomes his companion for the rest of the war. Henry relates is story to a young boy and inspiring journalist.

Confessions of an Imaginary Friend: A Memoir by Jacques Papier. I read this imaginative book first and then handed it over to my 11 year old. The story is narrated by an imaginary friends who goes through an existential crisis when he finds out he is imaginary. He goes on a soul-searching journey as he is assigned to different real-life friends, and makes the acquaintance of other imaginary friends, even joining a support group. There are some rather deep questions about existence and the meaning of life in this book, but it is also incredibly funny and touching, and one of the most unique books I've read in a while.

Odd, Weird & Little is a short quirky novel with a big message. There's a new kid at school and he is a bit unusual. The story is narrated by Woodrow, who is a misfit himself and while it is never stated, it is clear to the reader that Toulouse, the new kid, is actually an owl. At first Woodrow hopes that the other kids will focus on Toulouse's weirdness, instead of his own, but realizes that friendship with Toulouse is the better deal.

Don't miss any of our upcoming Monday book lists! Subscribe to our newsletter and bookmark our epic index of book lists for kids. 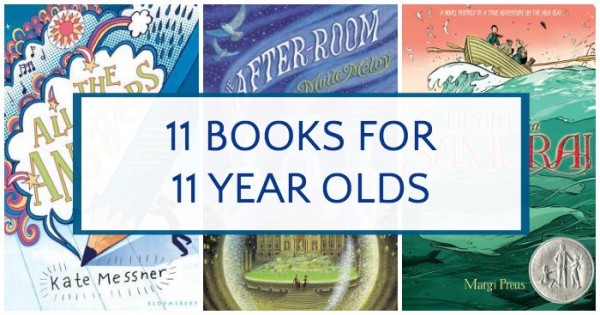 Subscribe to our newsletter and as a thank you, receive 10 waiting games kids can play anytime anywhere.
Your email will *never* be shared or sold to a 3rd party. Click here to view our privacy policy.
« The Tricky Tricky Peg Solitaire Triangle Game
American Folktales and Tall Tales for Kids »
5155 shares