Let's take a trip to the Scottish highlands, shall we? Or perhaps the lowlands are more your style. Whether you have Scots blood in you or no, these picture books based on Scottish folklore will have you picnicking by the loch with a hearty haggis and shortbread lunch. No? Ok, fine. But I still think you will love these folktales and fairy tales from Scotland. 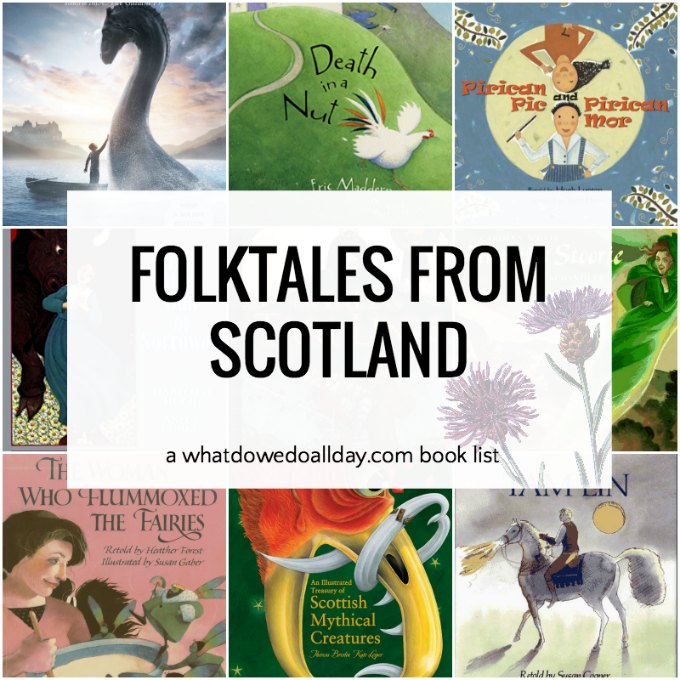 Scottish myths and legends include marvelous and mysterious creatures like loch monsters, selkies and kelpies. Scottish fairies feature prominently in many of the stories. Why read old stories? I mean, are these tales really still relevant? Yes! I notice that my son is always enraptured by folktales, no matter whether the origins are Scottish, Latin American or African. Folktales are important because the show ordinary people overcoming extraordinary situations, and while the circumstances in the story may be fantastical, readers will draw parallels with challenges in their own lives.

Below I have included three categories: single tale picture books, short story anthologies, and a couple of chapter books based on Scottish legends. (Note: book covers and titles are affiliate links.)

The Tale of Tam Lin by Lari Don is one of the most well known fairy tales to come out of Scotland and I put two versions on this list.  Tam Lin is based on a traditional ballad from the Scottish Borders. A young woman, Janet, meets a strange man in the forest. He says he is a mortal man who was captured by the Fairy Queen. The two come up with a plan by which Janet will rescue him during a midnight parade of the fairies in which he will be dressed as a knight on horseback. Janet proves to be a strong woman with the perseverance needed to rescue the knight and thwart the Fairy Queen. Kids will love the elaborate illustrations.

The Selkie Girl by Janis Mackay. A selkie is a legendary creature who can shed its seal skin and walk on land in human form. In classic folklore, the story goes that a man falls in love with a selkie, steals her skin so she cannot escape and is forced to be his wife. When their children find her skin she is finally able to return to the sea. I'm not so keen on that version, because of the whole "forces her to be his wife" thing but this tale is a fine substitution. A lonely boy meets a selkie girl skin and they bargain that she will be his play mate for a week, at the end of which he will return her skin.

The Woman Who Flummoxed the Fairies by Heather Forest. The King of the Fairies is mad because he can't get the crumbs from the baker woman's cake and so his fairies capture her and order her to bake a cake. The woman knows that if the fairies like her cake they will never let her go but force her to bake for them for eternity. So the clever woman comes up with a plan to escape the fairies and be reunited with her family. This Scottish folktale, with a hearty dose of humor and a sprinkling of magic, is so much fun.

Whuppity Stoorie by Carolyn White. This Scottish folktale will remind readers of Rumpelstiltskin.  A girl and her mother make a bargain with a mysterious woman to save the life of their favorite pig. When the woman demands payment she threatens to take the girl away to live with her unless they can guess her real name.

The Black Bull of Norroway: A Scottish Tale by Charlotte Huck. I had to check twice that this tale, set in Norway, was actually of Scottish origin, and yes, it is! Two of three sisters want to marry for status and money, the youngest wants to marry someone kind and loving. Peggy Ann declares she would marry the bull if it proved to be a noble husband. She and the bull set out on a journey, along the way Peggy Ann cares for the creature and he transforms into a man. The pair are separated for seven years and Peggy must fulfill a series of tasks to be reunited with him. This is a grand, epic folktale.

The Dragon Stoorwoom By Theresa Breslin draws upon folklore from Orkney. The King of Scotland calls for the gigantic Dragon Stoorworm to be defeated. Assipattle, a would-be suitor to the fiesty Princess Gemdelovely (those names!), and the princess decide that they will free Scotland from Stoorworm's wrath. This book is part of the same Scottish Folktales series as The Tale of Tam Lin and The Selkie Girl (see above): there are other books based on the kelpie, and Loch Ness legend.

Death in a Nut by Eric Maddern. I liked Maddern's Nail Soup well enough to include it  on my Scandinavian folktales book list so I knew I could count on another picture book by him. Jack refuses to let Old Man Death take his mother so he pummels him until he is small enough to fit inside a hazelnut. He then hurls the nut into the sea. But with Death contained, strange things start happening on the farm. Some children, not yet familiar with the fate of most farm animals, may be upset by some of the action, but for those who don't shy away from a little darkness in their folktales, this story encourages readers to contemplate the importance of death in the cycle of life.

Tam Lin by Susan Cooper. Here's another version of the Tam Lin story, not much different than the one I listed above but this time the young woman is a princess named Margaret. I actually like the illustrations in this version best, and both picture books are worth checking out for their subtle differences.

An Illustrated Treasury of Scottish Folk and Fairy Tales by Theresa Breslin. I love this oversized book with its gorgeous illustrations. Collections are great for kids who want to get a comprehensive view of the folklore from a particular geographic region. Fairy tale-literate kids will enjoy noticing the similarities of some of the tales with more well known versions, like Cinderella and The Gingerbread Man (here, the "wee bannock"!).

An Illustrated Treasury of Scottish Mythical Creatures by Theresa Breslin is another wonderful collection of tales, this time focusing exclusively on legendary creatures of Scottish lore. The illustrations are marvelous and any child who loves myths will enjoy learning about the lesser known beasts.

Secret of Ron Mor Skerry by  Rosalie K. Fry. Fiona is happy to be leaving the city to live with her grandparents in the rugged Western Isles of Scotland. While there she breathes in the magic of the place, listening and learning about the legends of selkies and tales of her mother's way with the sea animals. She also believes her brother Jamie, who disappeared in the sea, is still alive somewhere and she is determined to find him. Magical and lyrical. I absolutely love the film version, The Secret of Roan Inish.

The Water Horse by Dick King-Smith. Set in 1930's Scotland, a girl finds a strange egg on the beach and takes it home. She keeps it in her bathtub, where it hatches into a kelpie, a mythical water horse. The family raises it but when it gets too big they must release it into the loch. The movie version is very different than the book.

More folktales for you! 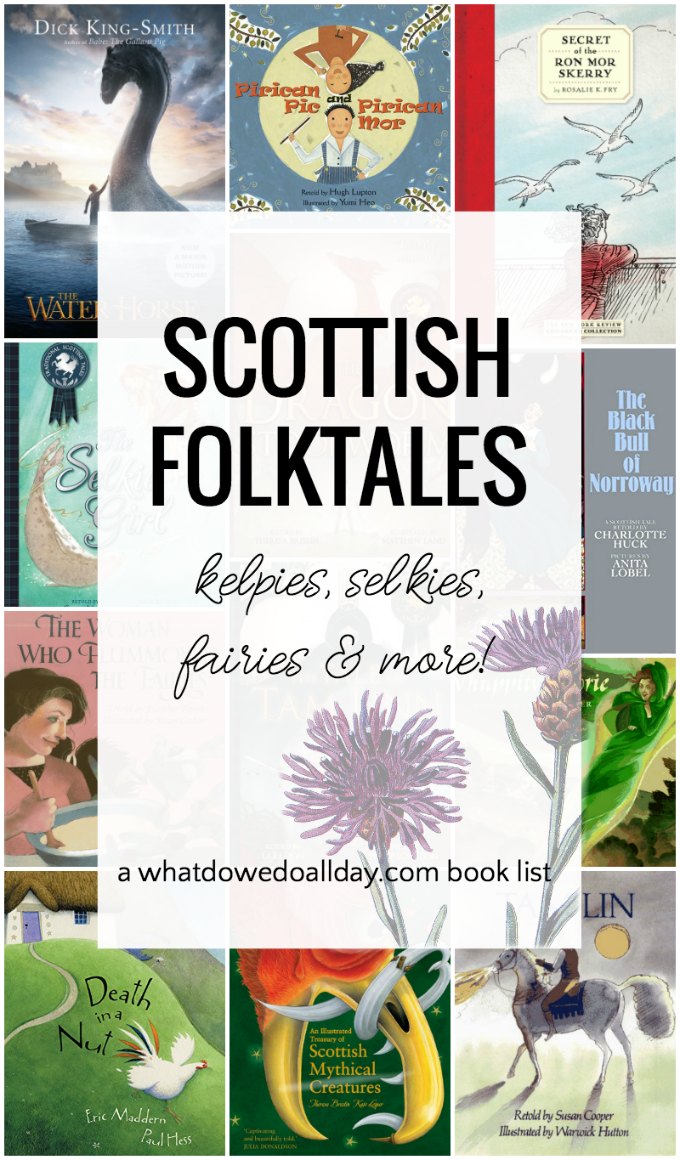 Subscribe to our newsletter and as a thank you, receive 10 waiting games kids can play anytime anywhere.
Your email will *never* be shared or sold to a 3rd party. Click here to view our privacy policy.
« Poetry Books for Babies and Toddlers
Children's Picture Books with Muslim Characters »
2570 shares