Quick! What are the  fairy tale picture books you remember from your childhood? Why did they speak to you?

Is it on this book list of the best fairy tales for children?

This is a list of European fairy tales for children and what I consider to be the best fairy tale picture books. I fully admit that many of them I chose simply because they were books my parents read to me while I was in my formative years. They have stuck with me and captured my imagination.

Since these are all European tales, please supplement this list with books from my around the world folktales book list series! And note that these are not adaptations of fairy tales, or modern tellings. (The fractured fairy tale list will be coming soon!) 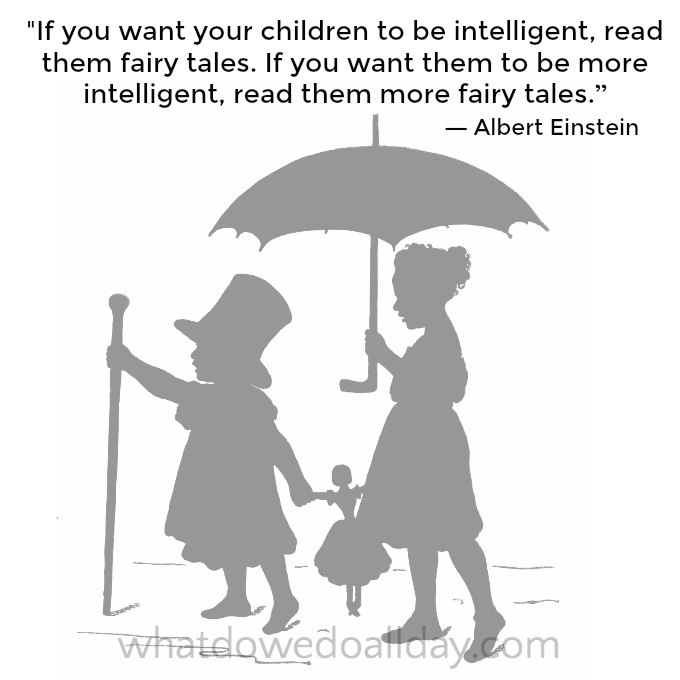 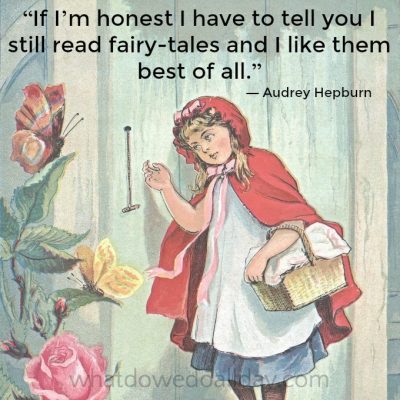 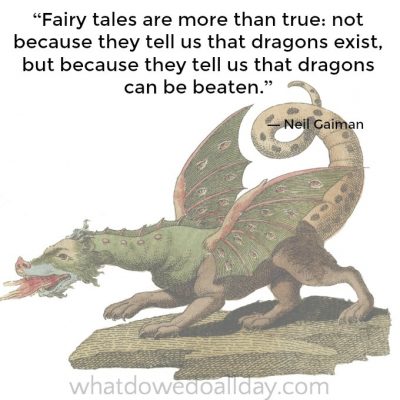 I know it's tempting to read fairy tales from collected works (and there are some great ones) but I highly encourage you to read single title fairy tale picture books.  I had to work hard to keep this book list from becoming unwieldy! No doubt you already have your favorite classic fairy tale picture books that immediately transport you back to your own childhood! (Note: book covers and titles are affiliate links.)

Snow White, text by Randall Jarrell, illustrated by Nancy Ekholm Burkert. I had this book as a child and I will always remember being surprised at the ending in which Snow White’s stepmother was forced to dance to her death while wearing red hot iron shoes. I wasn’t alarmed by it; in fact I always found the Disney movie much, much more frightening. I don’t think (most) kids find the original Grimm stories to be as disturbing as modern adults do. In any case, if you are going to share fairy tales with your child, the illustrations in this book are dizzyingly marvelous and the text is twelve thousand times better than Disney.

Beauty and the Beast, pop-up retelling by Robert Sabuda. I've never found a traditional picture book version of Beauty and the Beast that I loved, (nothing holds a candle to Robin McKinley's Beauty) so I'm going for this utterly fantastic Pop-up version that will totally wow your kids. Totally worth purchasing. Sabuda has other fairy tales, including The Little Mermaid.

Rapunzel retold and illustrated by Paul O. Zelinsky. If your primary goal is gorgeous illustrations you can't go wrong with Zelinsky. I like this version of Rapunzel because it draws on many different sources, not just the Grimm version. There is no other Rapunzel book that even remotely compares to this one.

Zelinsky has several other spectacular fairy tales including:

Cinderella text and illustrations by Marcia Brown. To me, Marcia Brown’s rendition of the classic fairy tale will always be the quintessential version. There are many, many Cinderellas out there, some quite good, others horrendous. It’s not gruesome like the original Grimm tales but it’s not saccharine-ified like Disney. In fact this was the first book that taught me Cinderella actually went to the ball three times. So you know, she actually knew the prince well enough to marry him. (I joke.) Anyway, Brown’s illustrations are divine and, of my goodness…  the costumes! Let’s just say there will be a lot of dress up play after reading this book.

Henny Penny retold by Paul Galdone. This could perhaps qualify as a folk tale (I'm not sure where the line is drawn) but it is one of my favorites so I get to decide. Henny Penny is freaked out that the sky is falling and rallies equally gullible animals to her cause. Galdone is a gold mine of fairy tales. It would be a little ridiculous for me to list all his books but several that are not on this list by other authors are:

Goldilocks and the Three Bears retold and illustrated by James Marshall. I thought maybe I should include a more reverent version of this tale, but honestly, I just love this one so much I had to include it. Goldilocks is so wonderfully naughty it's hard not to love her for it.

The Ugly Duckling by Hans Christian Anderson, retold and illustrated by Jerry Pinkney. Anderson's well-known tale about beauty is given a gorgeous makeover. Pinkney, in addition to many must-read picture book versions of fables, has illustrated several other fairy tales, including:

Three Classic Children's Stories text by James Donnelly, illustrated by Edward Gorey. Just last week on Instagram I shared my discovery of a Gorey illustrated version of Little Red Riding Hood. That book was written in verse by the marvelous Beatrice Schenk de Regniers (author of May I Bring a Friend). Sadly, it is out of print and why the book was re-written for this volume, I have no idea. When I saw the cover for this collection I had an A-HA! memory that I adored the Gorey-illustrated version of Rumpelstiltskin (text by Edith H. Tarcov - re-written by Donnelly for this version) as a kid and I am keeping my fingers crossed that my mother still has it! I haven't seen this exact collection in person but if your library has any Gorey fairy tales, check them out!! (I was unable to resist buying this book for myself!)

The Pied Piper of Hamelin, retold by Robert Browning, illustrated by Kate Greenaway. I was a little obsessed with this book when I was a kid but also totally freaked out by the story. The illustration of the place where the the kids end up after they followed the piper looked so appealing, yet the idea that the virtual doorway closed forever was quite freaky. But fairy tales help kids work through such fears and you can't go wrong with Greenaway's illustrations!

Hansel and Gretel retold by Cynthia Rylant, illustrated by Jen Corace. I didn't realize Rylant (who is a very prolific author) adapted fairy tales. This is a very accessible version of Grimm's Hansel and Gretel. It's not overly scary but all the classic elements are there.  Rylant and Corace also collaborated on a version of The Steadfast Tin Soldier.

The Frog Prince retold by Edith A. Tarcov, illustrated by James Marshall is another book I loved as a kid. I like the idea of fairy tales as easy readers. It is a nice way for kids to experience classic tales they may have previously heard on their own terms. Marshall's version has a good deal of humor, even though I still think it is weird that a prince wants to marry a girl who just threw him against the wall.

The Little Mermaid by Hans Christian Anderson, illustrated by Lisbeth Zwerger. Confession: I have never really liked this fairy tale. I won't delve into my psyche to try and explain why, lest I start to find things far disturbing than a story about a girl who sacrifices everything for a man who doesn't recognize her worth. Anywhooo. Zwerger's illustrations are spectacular, so if mermaids and muteness are your cup of tea, go for it.

Other books illustrated by Zwerger

The Town Musicians of Bremen, by the Brothers Grimm, adapted and illustrated by Gerda Muller. I loved this fairy tale when I was a kid. I tried my hardest to figure out which version I read, but I couldn't. I'm sure it is long out of print. I think this fairy tale about a traveling group of clever, musical animals is often overlooked but it is highly satisfying and Muller's illustrations are a delight.

The Fisherman and His Wife, retold and illustrated by Rachel Isadora. Isadora has several fairy tale books in which she sets the action in Africa.  They don't all work for me; I prefer her fables but I thought this was a successful book and I really love Isadora's collage illustrations.

Hans My Hedgehog, retold by Kate Coombs, illustrated by John Nickle. Never heard of wee Hans? You're not alone. I don't remember hearing this story at all when I was growing up. The premise, however, will sound familiar. A couple wishes against hope for a child. When the child is born his is half-hedgehog. Fearing a life of rejection, he sets out from home and meets..... (drumroll) two princesses. And what do you know, his luck starts to change. This is a great picture book to introduce your child to a lesser known Grimm tale.

The Sleeping Beauty. If your library has Swiss designer Felix Hoffann's illustrated version, it is worth seeking out. Hoffman also illustrated versions of other tales, including The Seven Ravens and King Thrushbeard. If you have a version of this tale you love, let me know.

Other book lists you will love: 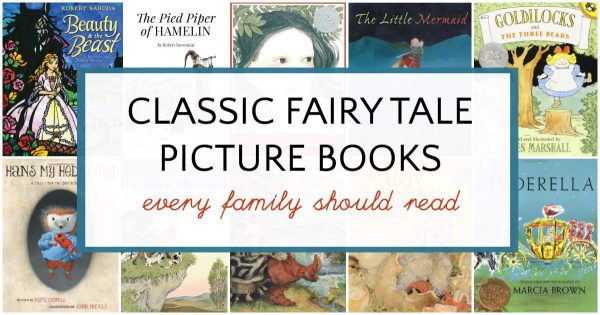 Subscribe to our newsletter and as a thank you, receive 10 waiting games kids can play anytime anywhere.
Your email will *never* be shared or sold to a 3rd party. Click here to view our privacy policy.
« The Epic Way To Read Ebooks
You Already Have these 40 Items to Do STEAM Projects at Home »
1018 shares