Learning how to play chess is a great brain workout. And lots of parents want their kids to learn basic chess skills to give those young brains a boost.

I have a confession.

This may be a little surprising seeing as how much I love playing games with my kids.

But chess? Na-uh. So tedious. 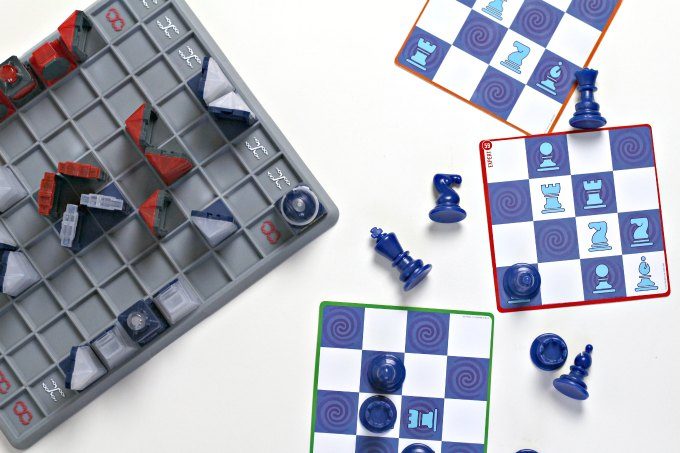 My kids LOVE chess and I grudgingly acknowledge learning chess skills has many benefits.

My older son won't play chess with me because he "wants to be challenged." True, it's hard to play chess with someone who doesn't have a strategy (or even cares about having one).

My younger son wants to learn basic chess skills and likes to play chess, but he can't play with his brother because he is whalloped every time and I can't stand the resulting meltdown.

I have now acquired the two perfect chess games. The two games are Solitaire Chess and Laser Chess, both from ThinkFun.

(Note: I purchased Solitaire Chess for $1 at a tag sale–score! ThinkFun sent me Laser Chess to try out. I included affiliate links in this post.) 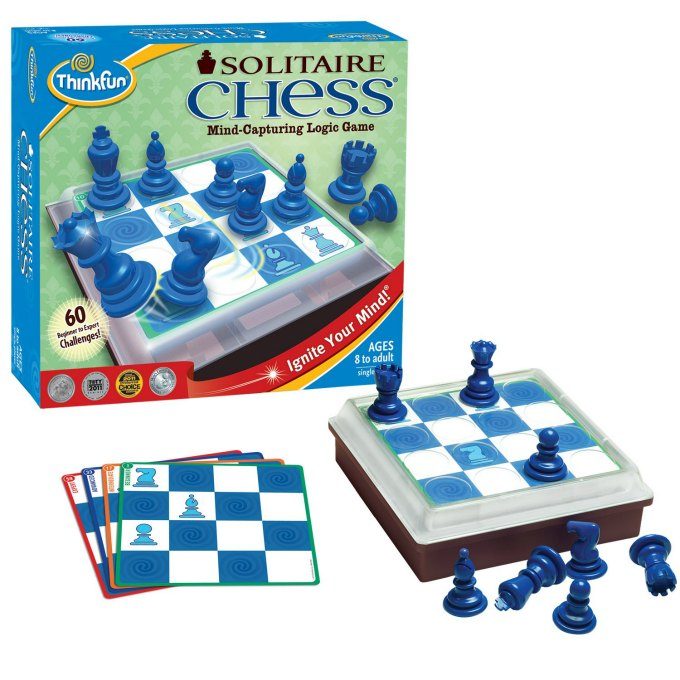 Solitaire Chess is (as the name implies) a single player logic puzzle. It will be enjoyed by chess players, chess learners and even kids who don't really know anything about chess!

The game (we should really call it a brainteaser) consists of 30 double-sided challenge mats that look like 4 x 4 chess boards, 10 chess pieces and a tray to keep it all together. Challenge maps come in 4 levels, ranging from beginner to expert.

The player choses a challenge map, places the chess pieces in the proper locations as indicated by the map and proceeds to move the chess pieces off the board, until only one piece left at the end.

The player must move the pieces according to normal chess movement rules. For example, bishops move diagonally, rooks move in straight lines, etc. Each move must result in a capture.

Why this game helps kids to learn basic chess skills:

ThinkFun recommends Solitaire Chess for ages 8 and up. Of course many children under 8 can already play chess, so use your judgement!

Solitaire Chess was a 2011 Toy of the Year, a Parent's Choice Gold Medal recipient, and received the Creative Child Magazine Preferred Choice Award.

The second game you will enjoy is Laser Chess. Laser Chess is a Mensa Select winner and won a National Parenting Product Award. 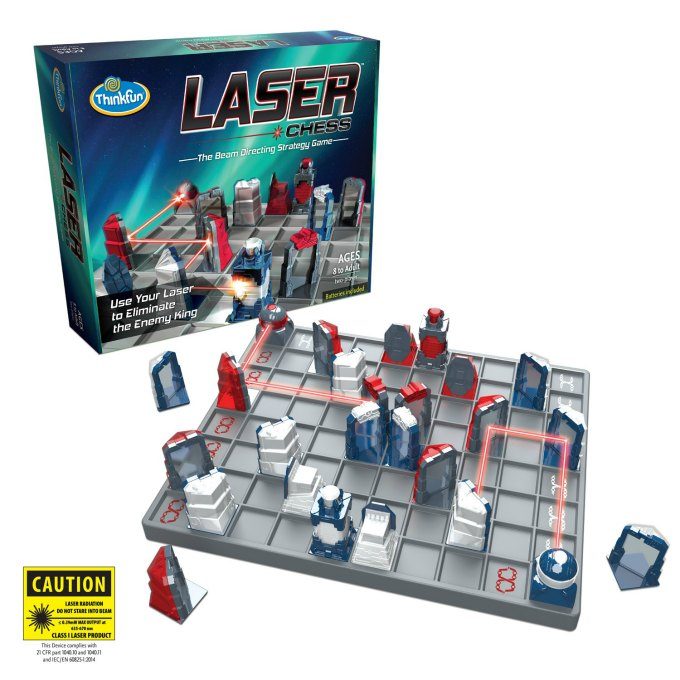 The basics of Laser Chess:

Each player has one laser piece and 12 game pieces, defenders, defenders, switches and a king. The board is initially set up according to one of five pre-sets. As players advance, they can invent their own pre-sets. During his or her turn, a player has the opportunity to make one of several types of moves, according to the movement rules. At the end of the turn, the player presses his laser token, which emits a beam. Any pieces are then removed from the board based on where the beam lands. The game ends when a laser hits a king.

Special precaution: This game uses a small laser beam and parents need to instruct kids not to stare into the beam. Please read the instruction manual that comes with the game.

This chess alternative strengthens many of the same skills needed for standard chess. Players must use logical reasoning, planning and strategic thinking. As they work though possible moves and focus on how pieces are oriented towards each other and the laser token, they are engaging their visual perception skills. In addition, the novelty of the laser beam is very enticing!

Maybe I will even learn basic chess skills and learn to love chess.

But in the meantime I have two substitutes that I can enjoy!

The best non-board games for families 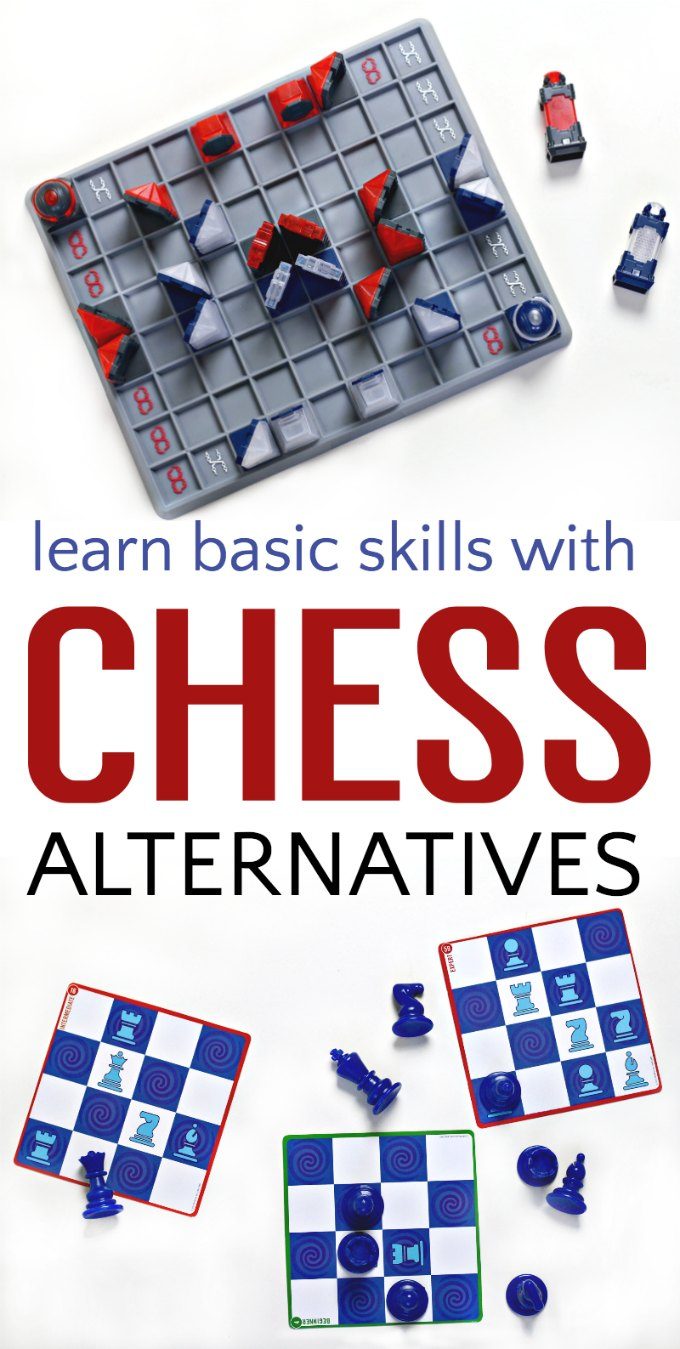 Subscribe to our newsletter and as a thank you, receive 10 waiting games kids can play anytime anywhere.
Your email will *never* be shared or sold to a 3rd party. Click here to view our privacy policy.
« Sleuth Your Way Through these Puzzling Mysteries
Classic Children's Books By The Decade: 1910s »
213 shares