I try to include diverse books in all my book lists and now is a great time to share this list of civil rights picture books. Books are a great teaching tool and these are perfect to to start a conversation with your kids about the civil rights movement. 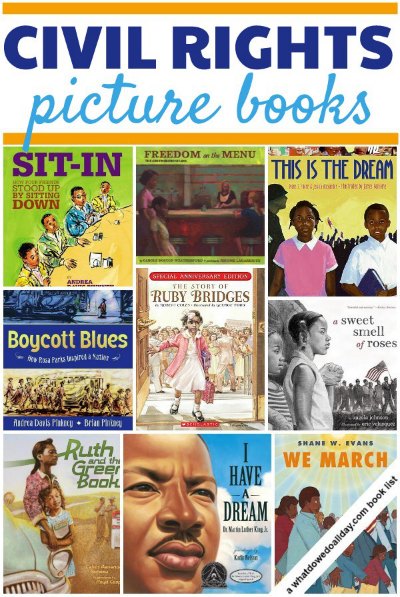 These picture books about the civil rights movement give one so much to think about and talk about with your kids. One of my favorite characteristics of the books on this list is that most of them emphasize the role children played in the civil rights movement. As an extension, be sure to chat with your kids how they can still fight to change the world today. (Note: book covers and titles are affiliate links.)

Child of the Civil Rights Movement is a first person narrative by the daughter of civil rights leader, Andrew Young. She describes how her family moved from New York back to the South so they could aid the civil rights movement. This is a long book, better for kids 7 and up, with a lot of information. Her story culminates in the march from Selma to Montgomery and the signing of the Civil Rights Act of 1965. What I like about this story is the emphasis on how the leaders of the movement cooperated with each other to make things happen. Mini-biographies of the individuals mentioned in the book are included at the end.

The Story Of Ruby Bridges. I really like this book because it's the true story of a child told in a way that children of the same age can really understand. This book celebrates six year old Ruby, who in 1960, faced angry crowds and empty classrooms as she became the first child to attend an all-white school after a court-ordered desegregation in New Orleans. Author Coles does a great job of making an historical event personal.

A Sweet Smell of Roses. A young girl, with her red-ribboned teddy bear describes her experience as she and her sister slip out of their house to join a freedom march. The focus is very much on the sensory experience. They stand, "waist high" in the "bright light", "clapping in time with [their] feet." There's no mention about which march it is, just one of the many freedom marches that took place under Dr. King's leadership. This is another lovely book that emphases how children were an integral part in the fight for freedom and readers can pick out the plucky protagonist in the illustrations by her bear's ribbon, which matches the stripes in the flag.

We March is one of my favorites. The spare text and brilliant illustrations make this a wonderful book for children as young as 3 years old. The light, first person narrative tells the story of a family getting ready to march in the historic event. Illustrations depict crowds of people from all walks of life and celebrate the excitement the event generated and the power of peaceful protest.

I Have a Dream. Kadir Nelson's gorgeous illustrations accompany an excerpt from Dr. King's most famous speech. The paintings cover a broad range of images: from close ups of clasped hands, to views of the national landscape, to the crowd at the Washington Monument. The hardcover book includes a CD of the official recording and the entire speech is included at the end of the book. I find it impossible to listen to the speech without weeping, but it's an essential experience for everyone.

Ruth and the Green Book. Here's something I didn't know, but which breaks my heart. From 1936-1964, "The Green Book" was a travel guide for African-Americans that included a listing of service stations that would serve them. That's something to talk about with the kids on your next road trip! Ruth and her family are en route from Chicago to Alabama to visit grandma. Ruth learns about Jim Crow laws for the first time and makes it her job to help navigate with the help of The Green Book. This is a great book about a less frequently told story. (A good chapter book to use in conjunction is the superb, The Watsons Go to Birmingham--1963)

The Other Side. I know I included this book in last month's list, picture books about trying new things, but it belongs here, too. The more I read it the more I love it. A fence, both metaphorical and physical, defines the boundary between Annie’s white family and Clover’s African-American one. Clover’s mom has told her not to cross the fence because it is unsafe. Instead, Clover sits on the fence, watching the other girl play. Annie eventually approaches Clover and the two sides begin talking, a friendship is formed and the fence, finally crossed. There is no didacticism in Woodson’s writing as might make one cringe in a book like this. The final image of a line of girls sitting on the fence points to the possibilities of the future.

Freedom Summer. Joe and John Henry are great friends. But, because Joe is white and John Henry is black they can't swim in the public pool together. This is Mississippi in 1964, after all. Instead, they spend their summer swimming in the creek. When the Civil Rights Act is finally passed, the boys look forward to finally going to the pool, only to find it is being filled with concrete. White leaders would rather forgo swimming that desegregate recreation areas. There's hope, too, though, as the boys head to buy their ice pops at the newly integrated general store.

Freedom on the Menu: The Greensboro Sit-Ins. In 1960 four black college students sat down at the Woolworth's lunch counter, labelled "WHITES ONLY." The story is told from young Connie's perspective. She sips her soda while standing but her siblings become active in the lunch counter boycott and she helps them make signs. I like that the author still included Connie's youthful desire to just have a banana split, which she finally gets to do -- while sitting.

Sit-In: How Four Friends Stood Up by Sitting Down. Here's another story about the 1960 Greensboro lunch counter sit in. I liked both and couldn't decide between the two, so am including both in this book list. I liked this one because of the food metaphors. "At first they were treated like the hole in the doughnut -- invisible." "The kids had a recipe, too. A new brew called integration." I love Pinkney's splendidly expressive illustrations, with their swirly lines and colors.

This Is the Dream tells a story of change in three parts. First we learn about the rules of segregation at drinking fountains, on busses, in restaurants and public spaces. "These are the buses -- a dime buys a ride, but the people are sorted by color inside." The second third then moves on to the events, large and small, that stir up the civil rights movement. Finally, the last few pages re-look at the places in the first part of the book -- now open and available to all. James Ransome's striking illustrations and Shore and Alexander's concise, rhyming text make this a great read aloud.

Martin's Big Words: The Life of Dr. Martin Luther King, Jr. This is a good beginner's guide to MLK. It's informative but not overly long as some picture book biographies can be. It gives a solid introduction to MLK's life and work and is beautifully illustrated. I'm not a teacher, but I imagine this would be a great choice for a Kindergarten or first grade classroom.

Boycott Blues: How Rosa Parks Inspired a Nation. When reading these books I was amazed at how much I had forgotten since high school civics class. I am quite embarrassed for myself. Pinkney's book tells the story of how the African-American community walked for 382 days rather than ride the segregated busses in Montgomery, Alabama. The rhythmic text and vibrant illustrations, which themselves appear to move beautifully capture the spirit of the amazing individuals who brought change to their community and the nation.

He's Got the Whole World in His Hands. I'm throwing this feel-good choice in for good measure. This is not specifically a civil rights book but a wonderful all-around we-are-all-one type of picture book. The classic Sunday School song is brilliantly illustrated by Kadir Nelson and will get you singing in no time.

The blog, Teach with Picture Books has a terrific post about civil rights books that includes ideas for questions to ask your kids (or lesson plan ideas for teachers). Some of the books above are included in her post in addition to a few others.

Have you read any of these? Have any that you would like to add? Be sure to let others know your recommendations by leaving a comment below. 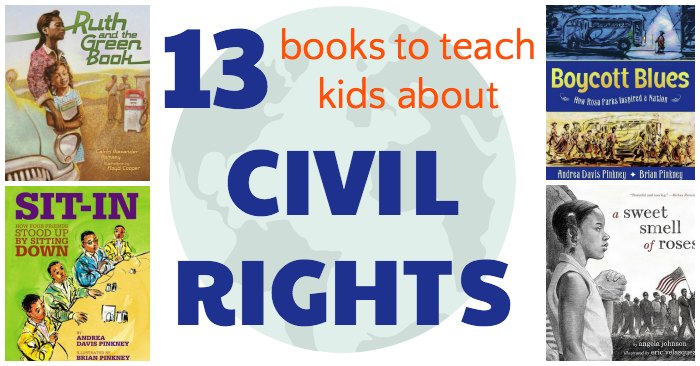 Subscribe to our newsletter and as a thank you, receive 10 waiting games kids can play anytime anywhere.
Your email will *never* be shared or sold to a 3rd party. Click here to view our privacy policy.
« Splendid Chinese Folktales for Kids
Deliriously Sweet "Making a Valentine" Coloring Page »
19488 shares