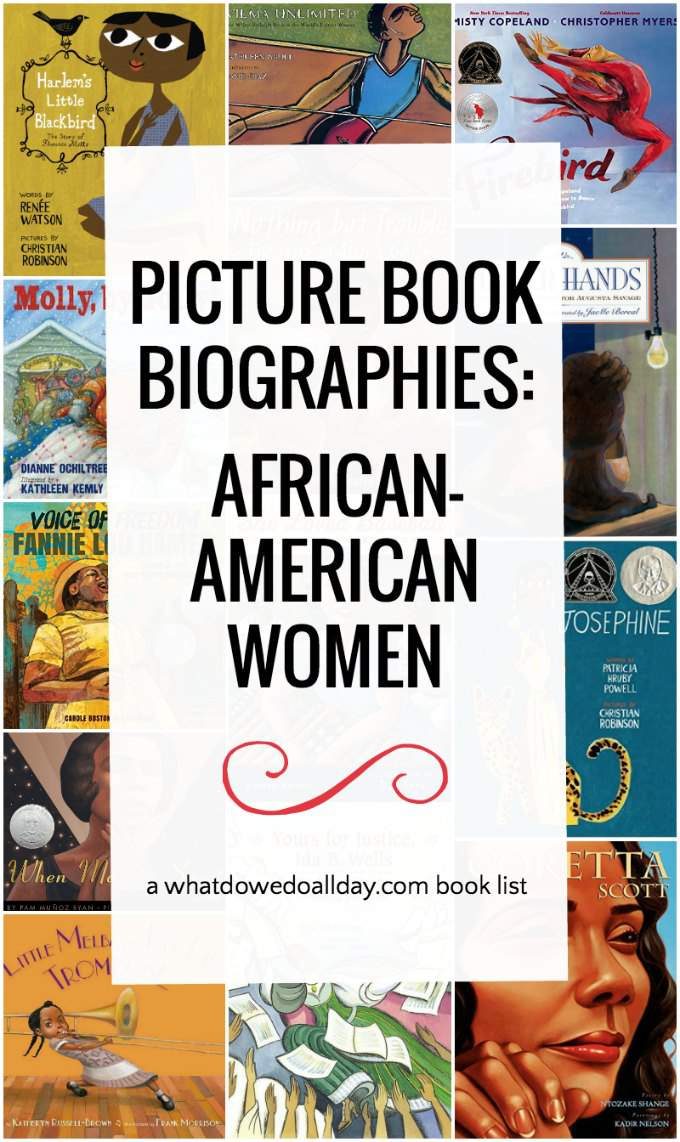 Biographies are a also nice way to include picture books in your older child’s reading diet. Many of them are text heavy and include historical details that will spark great conversations. The African-American women on this list have a wide variety of accomplishments, from music to sports to political to culinary (Note: Book titles and covers are affiliate links.)

If you are new here (welcome!), you can always find all of my book list indexed here –> Master Book List.

Josephine: The Dazzling Life of Josephine Baker by Patricia Hruby Powell is a splendid book about the singer for kids ages 7 and up, although I read it aloud to my 5 year old and he liked it, too. It’s a great blend between chapter and picture book. The text is what you might expect from a picture book: rhythmic, poetic, expressive (just like Josephine, really) but its 100 pages are divided into chapters based specific periods of her life.  Bold graphics accompany the story and I love how pages are blocks of color. I found it to be a very visually appealing book. There is so much information about the singer in this book, but it is never dry and quite honestly, I found it quite suspenseful!

Molly, by Golly!: The Legend of Molly Williams, America’s First Female Firefighter by Dianne Ochiltree. I love when picture books teach me about obscure but fascinating bits of history I didn’t hear about in school! In the early 1800s, Molly was a cook for a New York City firehouse but during a snowstorm her courage turned her into the first female firefighter in the United States. The book also contains fascinating facts about early firefighting and a useful bibliography. Kids will like this one a lot.

Moses: When Harriet Tubman Led Her People to Freedom by Carole Boston Weatherford emphasizes Tubman’s spiritual journey as she determines that God has called her to help slaves escape to freedom. Weatherford’s lyrical text and Kadir’s expressive paintings bring this inspiring woman to life. The author’s note explains that the particulars of her text are fictional but gives a biographical account of Tubman’s life.

When Marian Sang: The True Recital of Marian Anderson is written and illustrated by a stellar team: Pam Muñoz Ryan and Brian Selznick.  Like her jazz counterpart, Josephine Baker, contralto Marian Anderson found true acceptance first in Europe because Americans were unwilling to accept a black woman on the stage . When the DAR refused to allow her to perform at Constitution Hall, Eleanor Roosevelt arranged for her to sing at the Lincoln Memorial in 1939. (Watch a video of that performance here.) Like all the other women on this list, Anderson had to overcome strong barriers to achieve her success. Ryan skillfully recounts Anderson’s life as a singer and civil rights activist and captures the emotional ups and downs of Anderson’s journey. Selznick’s illustrations shine. An extensive author’s note is included.

Harlem’s Little Blackbird by Renee Watson is the story of singer Florence Mills, who used her fame to fight for civil rights in the 1920s. She was well-known for her compassion for the less-fortunate and for helping to advance the careers other African-American performers who faced profound racism.

She Loved Baseball: The Effa Manley Story by Audrey Vernick. Effa Manley is the only woman to be inducted into the Baseball Hall of Fame. She was the business manager of the Newark Eagles, a Negro League Baseball team, which she and her husband founded. She fiercely campaigned for the rights and due recognition for African-American ball players.

Wilma Unlimited: How Wilma Rudolph Became the World’s Fastest Woman by Kathleen Krull. Wilma grew from a 4 pound baby to be one of the fastest women in the world and competing at the Olympics. This is amazing considering that after a childhood bout of polio, it was thought that her leg was permanently damaged. Wilma worked through her injury as a young girl, earned an athletic scholarship and won three Olympic gold medals. My kids were fascinated with the idea that she won her medals even though she had a twisted ankle!

Only Passing Through by Anne Rockwell is not an easy book to read. Although most of the book focuses on Sojourner Truth’s time as a free woman, truths about slave ownership are straightforward and graphic and I recommend it for kids ages 7 and up. The story of Sojourner’s journey out of slavery into her newfound role as a prominent speaker for the abolitionist movement is inspiring. The emphasis is on the facts of Sojourner’s life, the legal difficulties of her life, as well as her charismatic nature. Personally I preferred the Pinkneys’ Sojourner Truth’s Step-Stomp Stride by Andrea Davis Pinkney. It is more poetic in tone, the truth about slavery is still present but not as graphic. There is also a strong emphasis on Sojourner’s work as a feminist. Both books have historical endnotes.

In Her Hands: The Story of Sculptor Augusta Savage. Author Alan Schroeder admits it was difficult to research the very private Augusta Savage (1892-1962). The story focuses on Savage’s youth up until her entrance into art school and her discovery of the importance to “sculpt what she knows.” There is an afterward with photos and more information about the artist. Savage is not very well know, but after reading this book I am curious to see more of her work!

Coretta Scott by Ntozake Shange, is a wonderful, lyrical recounting of the civil rights leader and wife of Dr. Martin Luther King, Jr. Shange’s imagry brings Coretta’s world to life. The text is not dense, like many of these biographies, but there is still much to engage children. As usual, Kadir Nelson’s illustrations glow.

Little Melba and Her Big Trombone by Katheryn Russell-Brown. A charming story about little known musician Melba Doretta Liston who taught herself to play the trombone when she was only 7! This is an extremely well-written jazz picture book about a musician you will wish you had known about much, much earlier!

The Little Piano Girl: The Story of Mary Lou Williams, Jazz Legend by Ann Ingalls and Maryann Macdonald focuses on the childhood of amazing pianist Mary Lou Williams and her impoverished background in Pittsburg where she charmed the neighbors with her magical playing. As a biography I felt it lacked a sense of urgency and interest about an important figure in history, but as the story of an extraordinary girl who overcame hardship to be accepted for her talent it is interesting and I think music-loving kids will enjoy the story.

Nothing but Trouble: The Story of Althea Gibson by Sue Stauffacher. Before Venus and Serena there was Althea. Althea grew up in Harlem as a rowdy tomboy and went on to become the first African-American to win the Wimbledon Cup. My favorite part of the book is the way Greg Couch illustrated Althea, with a sort of constant rainbow vibration. This is a fun read aloud, especially for sports fans, who will enjoy mimicking the voice of an announcer.

Firebird by Misty Copeland. In this gorgeous autobiographical picture book, Copeland writes poetically about her feelings as an ordinary girl struggling with self-acceptance but who has dreams of becoming a prima ballerina. The illustrations are absolutely stunning.

Bring Me Some Apples and I’ll Make You a Pie: A Story About Edna Lewis by Robbin Gourley. I think it’s a stretch to call this book a biography, but nevertheless, it’s nice to have a foodie book here in the mix. Lewis became a famous chef, known for her cookbooks and fresh, Southern cooking. The story follows her connection to the harvest. As the season progresses, her family picks fresh fruits and vegetables, reveling in their bounty. The book is more about Lewis’ early connection with food than the details surrounding her career and growth into a professional chef, although there is an author’s note with some biographical information. This would be a fun book to read aloud in the summer.

Through My Eyes is by Ruby Bridges, the girl who is best known for being the first African-American student at a New Orleans school after a court-ordered desegregation. Bridges pens her story in an appealing, direct voice and I was impressed at how well the book speaks to young children. It’s definitely written in a style that makes the events of the time understandable for kids. It’s a long book (60 pages) and includes some wonderful photographs. (See my list of civil rights picture books for an additional title about Ruby.)

Yours for Justice, Ida B. Wells: The Daring Life of a Crusading Journalist by Philip Dray, illustrated Stephen Alcorn. In Post-Civil War America, Wells was an anti-lynching activist and one of the first successful Black Americans to win a legal battle in court. She wrote tirelessly against Jim Crow and refused to back down, even in the face of threats to her life.

Fly High!: The Story of Bessie Coleman by Louise Borden and Mary Kay Kroeger. Here is a story that is well suited for an inspiring picture book: a daring woman overcomes the hardships and prejudices of her early life to become the first African-American woman to earn a pilot’s license. Unfortunately, I found it a bit dry but you’ve probably figured out by now I like books with suspense and metaphorical imagery and language. It did receive several starred reviews, which is why I’m including it here. I do think it’s worth getting from the library because Bessie’s story is one that should be told.

Voice of Freedom: Fannie Lou Hamer: The Spirit of the Civil Rights Movement by Carole Boston Weatherford. Poems tell the story of Fannie Lou Hamer’s life, from her childhood as a sharecropper to her life as an activist. The text is emotional and doesn’t gloss over Fannie’s hardships, and the collage illustrations are stunning.

Subscribe to our newsletter and as a thank you, receive 10 waiting games kids can play anytime anywhere.
Your email will *never* be shared or sold to a 3rd party. Click here to view our privacy policy.
1727shares
« Christmas Gift Coloring Page
Splendid Chinese Folktales for Kids »