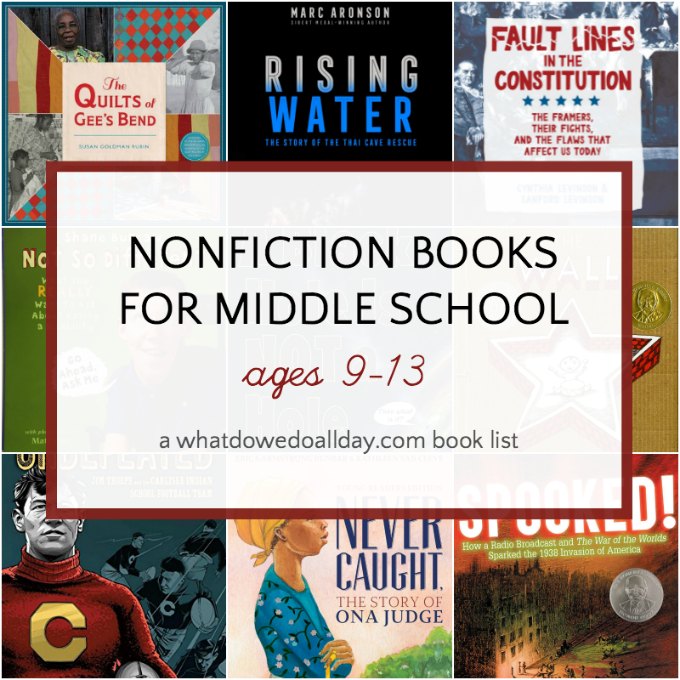 The nonfiction books on this list are meant to appeal to a wide range of readers. Some are geared towards kids who really don't want to read a long, historical narrative. Others are written more like novels and some are very scientific in nature. It is my hope that there is something for everyone on this list, but scroll down to the bottom of the list to find links to more of my nonfiction book lists. (Note: book covers and titles are affiliate links.) 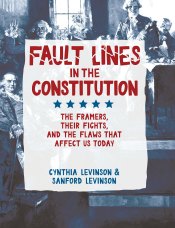 Fault Lines in the Constitution: The Framers, Their Fights, and the Flaws that Affect Us Today by Cynthia and Sanford Levinson. This book is written for middle grade students but frankly I learned just as much as they will. This fearless look at the Constitution is so fascinating. Unfortunately this country has a tendency to hold up the Constitution as some sort of flawless Bible, but this text will teach kids not just to see and discuss its imperfections and think critically about its role as a governing document, but to be thoughtful and active citizens. 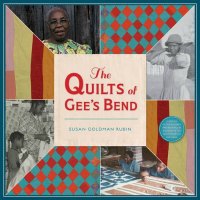 The Quilts of Gee's Bend by Susan Goldman Rubin. Teach your kids about a how African Americans recorded their history, stories and culture in quilts! Plus, the photographs are absolutely gorgeous. I think I may be overusing the word "fascinating" on this book list, but it certainly applies to this book! 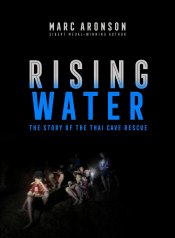 Rising Water: The Story of the Thai Cave Rescue by Marc Aronson. Your preteens may be familiar with the recent news stories about the boys soccer team trapped in a cave in Thailand. This book vividly recounts the harrowing details of their rescue. In the final chapter Aronson documented his journalism and how there are gaps in the information that was available to him. That is a great thing for kids to think about so they can be critical readers of nonfiction books. 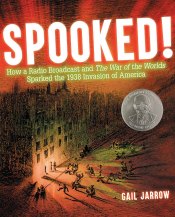 Spooked!: How a Radio Broadcast and The War of the Worlds Sparked the 1938 Invasion of America by Gail Jarrow. I think middle schoolers will be riveted when they read the story of how a radio broadcast convinced its audience that the United States was under attack by aliens. But even more than that, Jarrow dives deep into the media coverage of the radio "attack" and the book will spark a lively discussion about the parallels with "fake news" today. 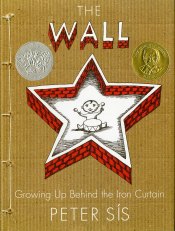 The Wall: Growing Up behind the Iron Curtain by Peter Sís. Although this memoir is structured more like a picture book than a full length book, the format will draw in reluctant readers as well as voracious students of cultural and social history. It is strange sometimes to think about how the Iron Curtain played such a huge part in the global landscape when I was growing up and now it has retreated from our consciousness. Sís's illustrations offer much to look at and his clear and concise text will give students of history a primer on living in a 20th century communist country. 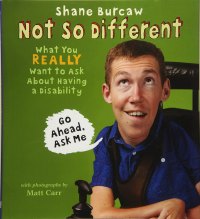 Not So Different: What You Really Want to Ask about Having a Disability by Shane Burcaw. Burcaw lives with spinal muscular atrophy and in this book he addresses questions both small and large about what his life is like as a disabled person. It is actually a picture book aimed at elementary kids, but given that a majority of middle schoolers may have the same unanswered questions about living with a disability as younger kids, I recommend it for both age groups. An author's note provides detailed information, as well. Middle school kids ages 13 and up may enjoy Burcaw's YA memoir, Laughing at My Nightmare.

Life on Surtsey: Iceland’s Upstart Island by Loree Griffin Burns is a title from the great Scientists in the Field series of science-focused books. It is a fascinating look at how life developed on a brand new island created by a volcanic eruption in 1963. It will be of particular interest to middle schoolers interested in earth science, evolution and geology.

Never Caught, the Story of Ona Judge: George and Martha Washington’s Courageous Slave Who Dared to Run Away (Young Readers Edition) by Erica Armstrong Dunbar and Kathleen Van Cleve. Dunbar and Van Cleve have written an extremely readable biography detailing what Ona Judge’s life would have been like, how the Washingtons viewed slavery, how they treated their slaves, and crucially, how they pursued Judge after she escaped. This book is an eye-opener for children whose views of Washington were formed around the cherry tree myth. Did you know Washington attempted to break his own fugitive law in order to capture Judge? Not exactly the picture of a fair and just leader. That said, even though the author’s sympathies clearly lie with Judge, the book does not demonize the president.

It’s Up to You, Abe Lincoln by Leila and Tom Hirschfeld. Kids tired of the same old nonfiction format? Try this title on for size! 10 chapters cover ten important moments from Lincoln’s life and his decisions surrounding each one. Each chapter is written as if the narrator is speaking directly to Honest Abe. The chapters discuss Lincoln’s tough decisions, and their repercussions with humor. But despite the seeming irreverence, the reader comes away with a wealth of knowledge about the serious and complex issues Lincoln faced. Highly recommended.

A Black Hole Is Not a Hole by Carolyn Cinami DeCristofano. Is your mind boggled by the concept of a black hole? Are your kids interested in space? For someone like me, who has little formal science background, I found this book to be incredibly accessible and I got sucked right into it. (Get it?) So interesting!

Drowned City: Hurricane Katrina and New Orleans by Don Brown. Formatted like a graphic novel, this moving book looks at the physical devastation of Hurricane Katrina, as well as the emotional toll on its citizens. I love the graphic novel format for reluctant readers of social and political history.

Around the World by Matt Phelan is a splendid graphic novel about three different 19th century explorers, Thomas Stevens who decided to ride his bicycle around the world, Joshua Slocum, who was the first man to sail around the world solo, and of course the intrepid Nellie Bly, a reporter who set out to go around the world in under 80 days.

Turning 15 on the Road to Freedom: My Story of the Selma Voting Rights March is an appealing conversation-style first person narrative by Lynda Blackmon Lowery, the youngest person to march all the way from Selma to Montgomery. Lowery describes her experience being jailed nine times (all before the age of 15) and beaten on Bloody Sunday in Selma, Alabama. It’s an amazing story and I actually was unaware of how huge a role teenagers played in the events leading up to the Voting Rights March. Lowery speaks directly to children and tells them they have a voice and can be history makers just like you. A final reference to the 2013 Supreme Court decision and assertion that discrimination no longer exists challenges the reader, “Who has the right to vote is still being decided today.” An superb, must-read book.

The Port Chicago 50: Disaster, Mutiny, and the Fight for Civil Rights by Steve Sheikin is about a little known event in 1944 in which war and civil rights collided. 244 African-American soldiers refused to follow a command which they felt would have put them at unnecessary risk. For their stand, they were charged with mutiny. Sheinkin’s book looks at the event, what led up to the mutiny and how differently the armed services treated its white and black soldiers. Fascinating.

Subscribe to our newsletter and as a thank you, receive 10 waiting games kids can play anytime anywhere.
Your email will *never* be shared or sold to a 3rd party. Click here to view our privacy policy.
« Cute Summer Coloring Pages
June Read Aloud Books - That Will Make You Want to Go Outside! »
3762 shares