I have lately noticed and increase in the number of middle grade books that feature neurodiverse characters, which is wonderful. All children deserve to read about others like themselves, and reading about a variety of different experiences opens up the world for everyone.

You will find books about dyslexia, ADHD, sensory disorders, anxiety and more. For this book list I specifically chose only books narrated by or told from the neurodiverse character’s point of view. These are books about kids who learn to help themselves, face their own challenges, persevere and harness their skills. 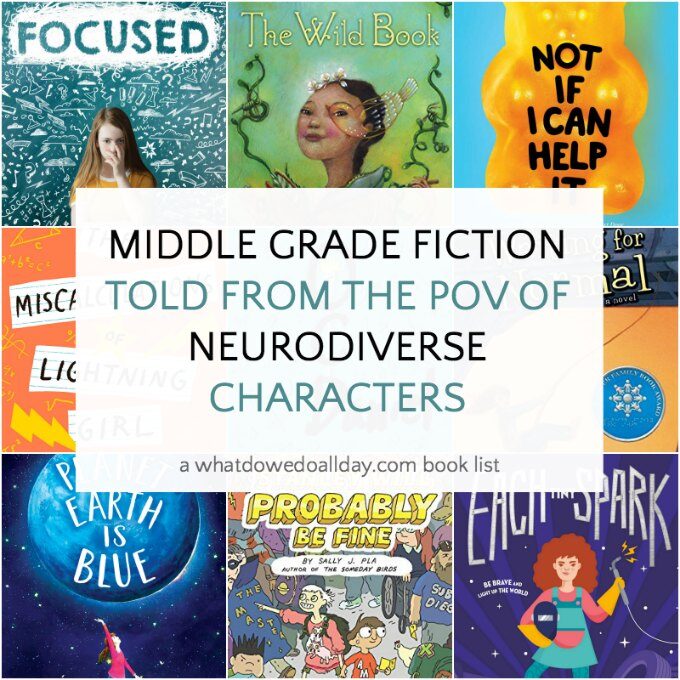 I was able to include a mix of contemporary, historical fiction and fantasy. Some of the books are what would be considered #OwnVoices books–written by authors who have experienced the challenges faced by the characters. As always, fee free to leave your further recommendations in the comments. (Note: book covers and titles are affiliate links.)

Some of the books below cover autism, but for more selections visit my list of books with characters on the autistic spectrum. For books that deal with mental illness challenges take a peek here: Books about mental illness for 9-13 year olds.

Planet Earth is Blue by Nicole Panteleakos is told from the point of view of twelve year old, Nova, who is autistic and mostly non-verbal. Separated from her big sister, Bridget, she now lives with new foster parents. Nova longs for Bridget, but believes in her sister’s promise that she will return in time to watch the launch of the Challenger. Beautifully written, with humor and heart, this book will not fade from your memory for a long time.

Miscalculations of Lightening Girl by Stacy McAnulty. This book is so fun. When Lucy was struck by lightening, she became a math genius. She wants to skip ahead to college but her grandmother requires a few conditions, first. She must attend public middle school for one year, make one friend and join one activity! For Lucy, that is not as easy as it sounds.

Focused by Alyson Gerber. In the author’s note, Gerber relates her own experience growing up with undiagnosed ADHD and executive function disorder and her first hand knowledge informs her storytelling. Because of her challenges, seventh-grader Clea struggles in school and has difficulty keeping her best friend’s secrets, which gets her into hot water in her social life. Added to that, Clea is reluctant to be formally diagnosed with ADHD. However, Clea joins the chess team and finds an activity that she can focus on, giving her something to work towards.

Stanley Will Probably Be Fine by Sally J. Pla. I found myself giggling quite a bit while reading this book. Stanley Fortinbras (love that name!) struggles with anxiety and sensory processing disorder. He even sometimes faints–how embarrassing! However, he loves comics trivia and pushes back against his worries to join in a a giant comics-trivia treasure hunt with his quirky new neighbor. Trivia Quest takes the pair all over the town, and Stanley works hard to overcome his difficulties to win the day.

A Mango Shaped Space by Wendy Mass. Mia has synesthesia, a condition in which the 5 senses overlap. It can manifest itself in different ways. For Mia, sounds, letter and numbers all have colors. No one believes her and her synesthesia causes her difficulty at school. She finally gets a name for her experience and meets others like her, but struggles with the death of her beloved cat, Mango. There has been some criticism of Mass’s portrayal of synesthesia, but the book is sure to start all sorts of conversations about what it’s like to experience the world in a way outside the “normal.”

Fish in A Tree by Lynda Mullaly Hunt. Ally doesn’t know how to read and has become a master at hiding and distracting others from what she sees as something to be ashamed of. A discerning teacher discovers her secret and Ally gets a diagnosis of dyslexia, offering her hope.

May B. by Caroline Starr Rose. 13 year old May and her family live on the frontier and in order to help out, May’s parents find her a place working for another family fifteen few miles away. When the couple mysteriously disappear and leave May alone, she must find a way to survive the oncoming winter. A thoughtful touch is May’s strong interest in learning and reading, even as she struggles with dyslexia (although, unlike modern readers, May doesn’t know dyslexia is her problem).

Waiting for Normal by Leslie Connor. I’m pretty much in love with all of Leslie Connor’s books. Addie lives in a mobile home with her bipolar mother. She is mostly left to take care of the home front, while her mother continuously disappears for days. Her stepfather and half sisters come by to offer a glimpse of what it might like to live a normal life. Addie perseveres, making friends, playing her flute and facing the challenge of school work when she has dyslexia.

Absolutely Almost by Lisa Graff. Albie struggles with school. He has learning disabilities and almost all subjects are difficult for him. He is starting a new school and gets an artistic new babysitter, who connects with him on a creative level. At his new school he finds sympathetic teachers who help him navigate his learning delays. He and his parents are still trying to understand each other. In other words, life is challenging for Albie, but he is learning about life and how he can succeed in the world, despite his difficulties.

Up For Air by Laurie Morrison. 13 year old Annabelle loves swimming more than anything, but her mother insists she keep up with her school work in order to be allowed to spend so much time with her swim team. Annabelle struggles with her academics and starts to ditch her tutor in order to prove that she belongs on the more advanced team. During a period of changing friendships, difficult school work and her concern she is disappointing her parents, Annabelle makes a few bad decisions, but ultimately realizes she needs to make better choices.

Each Tiny Spark by Pablo Cartaya. Cuban-American sixth grader Emilia has ADHD and has a lot of difficulty staying focused at school. After her father returns home from deployment, Emilia notices that he seems a bit different, moody and more distant. And the difficulties keep coming; a school assignment which illuminates social injustice threatens her oldest friendships.

Not If I Can Help It by Carolyn Mackler. Willa has sensory processing disorder but keeps it hidden from everyone, even her best friend, Ruby. When Willa finds out that her father and Ruby’s mother are in love and planning on getting married, she is upset. She doesn’t want anyone to upset her life with such big changes. Big changes are hard for a lot of kids, even those not also dealing with SPD, so young readers will be able to easily relate to Willa’s concerns.

The Wild Book by Margarita Engle. Fefa lives on the family farm in Cuba with her 10 siblings. A doctor tells Fefa that because of her dyslexia she will never read or write. Her mother, fortunately, is not so easily convinced. She gives Fefa a journal as a word garden in which to practice. Set in 20th century Cuba, against the backdrop of some difficult times, this verse novel is a wonderful story of a girl and her perseverance.

OCDaniel by Wesley King. I actually wasn’t sure if I should include OCDaniel on this list, or on my forthcoming book list featuring characters with mental illness. It’s a blurred line. I have seed OCD described as a mental health illness, but it also has deep connections to anxiety, so perhaps I shall just put it on both lists! 13 year old Daniel is beset by irresistible compulsions like a complicated bedtime routine that he must start over if he makes a mistake by flicking the light one too many times. He thinks he is crazy and doesn’t want anyone to find out. He gets drawn into a mystery when a classmate wants his help figuring out why her father has disappeared.

Subscribe to our newsletter and as a thank you, receive 10 waiting games kids can play anytime anywhere.
Your email will *never* be shared or sold to a 3rd party. Click here to view our privacy policy.
198shares
« 10 Books for Readers Who Love The Baby-Sitters Club
DIY Magnetic Bookmarks: Easy Craft for Kids Who Love to Read! »