You are here: Home / Books / 17 Children’s Books about Summer Camp!

Do your kids go to summer camp? Whether your kids are headed off to camp for the first time or they are summer camp veterans, they will enjoy these picture and chapter books about summer camp. Use these books to help allay anxieties about heading off to a new place and having to make new friends, and being away from home. 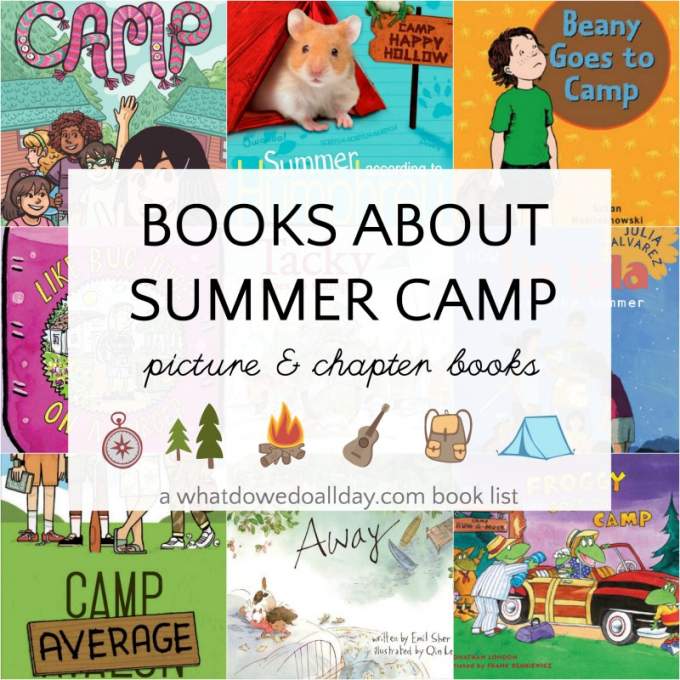 Just a clarification that these books are about summer camp, specifically, not camping in general. I wanted to keep the focus narrow or I would get overwhelmed! Whether you do a DIY summer camp at home, a day camp  or your kids go off to overnight camp pick, up some of these wonderful summer camp themed books! (Note: book cover and titles are affiliate links.)

A Couple of Boys Have the Best Week Ever by Marla Frazee. James and Eamon are scheduled to attend nature camp together.  The two friends spend their summer days doing everything and nothing, essentially having the greatest time ever! Frazee deftly captures what summer with friends is all about.

Froggy Goes to Camp by Jonathan London. I loved reading the Froggy books when my kids were little. I always found Froggy’s quirks endearing and London’s word play is so much fun to read out loud. In this story, Froggy heads off to a week of summer camp and the usual humorous antics follow. Great fun.

Tacky Goes to Camp by Helen Lester. Until I started looking for summer camp picture books and found this title I didn’t real that Tacky the Penguin was actually a book series. Tacky and his pals head off for some fun at Nice Icy Land summer camp. An evening of ghost stories sets some of the penguins on edge but Tacky, with his endearing qualities pulls everyone through it. Expect lots of laughs when you read this one out loud.

Away by Emily Sher. A boy is anticipating summer camp and doesn’t want to go! He and his mom communicate through post it notes. She is trying to build an excitement about camp, but he isn’t having any of it until he learns from a grandparent that his mom had the same trepidation about going off to camp. This is a wonderful story with brilliant illustrations. I also appreciated that the story was about a mixed race family.

Most early chapter book series will have at least one book with a summer camp theme. So if your child loves Katie Kazoo, or Cam Jansen, or any other series, look for the summer camp edition. Here are a few I’d single out.

Sam and Charlie (and Sam Too) at Camp! (series) by Leslie Kimmelman. Sam and Charlie head off to Jewish summer camp for the first time. Charlie’s little sister Sam is not old enough to go with them this time, though. While at camp the friends learn about the shomrei adamah and the Jewish tradition of taking care of the earth. Short chapters and colorful illustrations make this a good first chapter book series. 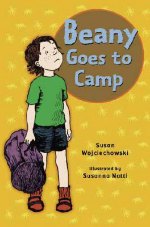 Beany Goes to Camp by Susan Wojciechowski. The Beany series is out of print but you should be able to find it at your local library. The books in the Beany series have an old school feel to them. Beany is a regular kid who reluctantly goes off to camp. Five short chapters about typical camp experiences like swimming, campfires and cookouts will have readers giggling.

Justin Case: Shells, Smells, and the Horrible Flip-Flops of Doom by Rachel Vail. This is a good series for kids who have trepidation about going off to summer camp. Justin is headed for a summer of camp and he decides that this summer he is going to be brave and overcome his worries about things like ouch-y flip flops, deep swimming pools and too-rowdy sports. Best for readers ages 7 and up.

Summer According to Humphrey by Betty G. Birney. My son has much love for the Humphrey series and so do I! Humphrey is a class pet and this year her actually gets to go with the class to summer camp. We have primarily listened to this series on audiobook so if you need something to listen to in the car pick this one up. The older kids might even enjoy a chuckle or two while listening. Best for readers ages 7 and up.

Runaway Ralph by Beverly Cleary. This is the middle book in the classic Mouse and the Motorcycle trilogy. It’s a great choice for both read aloud time and independent readers. Ralph spends his summer at Happy Acres Camp evading cats, making friends and eating PB&J. Best for readers ages 7 and up.

I had to work hard to limit my selections for this list because there were quite a few I was considering. But to keep it manageable I curated a group of books that (I hope) depict a variety of camp experiences.

Camp by Kayla Miller. This is a fun graphic novel sequel to Miller’s Click. Friends Olive and Willow head off to summer camp together but Willow has difficulty making new friends. Olive finds Willow’s dependency on her frustrating and their friendship is tested. This is a great read with a positive message and a diverse cast of characters.

Like Bug Juice on a Burger by Julie Sternberg. Brooklyn girl, Eleanor, is nervous about being sent off to Camp Wallumwahpuck. She doesn’t like learning how to swim, or the suspicious food, but with the companionship of new friends and camp counselors, she finds herself growing and learning. What I like best about Sternberg’s writing is her ability to tenderly capture a well-rounded picture of growing up by combining the small joys of new childhood experiences as well as its frustrations. Written in free verse.

Spy Camp by Stuart Gibbs. I actually haven’t read this particular book myself but the Spy School series is a great favorite of my older son. Even though he is now above the target age of the series, he still reads each new book when it comes out! Middle schooler, Ben, is a CIA agent in training and while he is at summer spy camp an evil agent tries to recruit him to the dark side! If you have kids who love spy novels check out my list of spy books for kids – all great for summer reading!

Applewhite’s at Wit’s End by Stephanie S. Tolan. I adore this series about a super creative and eccentric home schooling family. This is the second book in the middle grade series about the Applewhites. The family is in financial straits and in order to lift their fortunes, the father decides to host a summer camp for creative children. Of course, like the first book, there is total, hilarious chaos. You may also enjoy it as a read aloud for ages 10 and up.

To Night Owl from Dogfish by Holly Goldberg Sloan and Meg Wolitzer is an epistolary novel. Avery and Bett’s fathers sending them to the same summer camp in hopes that they will become friends. The dads are dating and thinking about getting married. At first, Avery and Bett are determined to dislike each other, but instead end up the best of friends. The book deals with the meaning of friendship and family. Avery and Bett discuss their origin stories, so readers hear about blended families, adoption, surrogates and learn that families come in all combinations.  I absolutely adored  this book and even though it ends with a wedding, its not the one you were expecting!

While reading this To Night Owl from Dogfish , I couldn’t help but compare it to this next book on my list….

The Parent Trap (aka Lottie and Lisa) by Erich Kästner. You’ve watched the classic movie (or perhaps the remake) now read the German original, first published in 1949. You already know the conceit: two girls away at summer camp discover they are long-lost twins and attempt to reunite their parents. Definitely read in in conjunction with To Night Owl and Dog Fish!

Camp Average by Craig Battle. The campers at Camp Avalon are not the sportiest. In fact, this diverse group of kids has nicknamed their summer camp, “Camp Average.” This year, however, a new director is determined to change their fortunes and turn the campers into sports stars. The campers aren’t really having it, though and they start losing intentionally. The preteens learn about friendship, perseverance and the importance of teamwork.

How Tía Lola Saved the Summer by Julia Alvarez. A single father and his three daughters are coming to stay with Miguel’s family for a week during the summer. Miguel is not looking forward to the visit, but Tía Lola manages to make everything magical with her insight and understanding. It’s a little bit different than your classic “summer camp” book because Lola starts a personal camp for her nieces, nephews and a couple of their friends.

Subscribe to our newsletter and as a thank you, receive 10 waiting games kids can play anytime anywhere.
Your email will *never* be shared or sold to a 3rd party. Click here to view our privacy policy.
« Game of the Month: Zangle!
Kindergarten Summer Reading List (4-6 Year Olds) »