×
You are here: Home / Books / Unicorn Books for Kids that Won't Give You A Sparkle Headache
133 shares

Do all kids go through a unicorn phase? Truthfully, I'm still in my unicorn phase, ha ha ha. Unicorns often come with a heaping serving of rainbows, sparkles and glitter, but it doesn't always have to be like that. This list of unicorn books for kids focuses on quirky stories, magnificent adventures and humorous tales. Sure, it's hard not to include a wee bit of sparkle, but even if pink isn't your children's favorite color, they are sure to love these books. 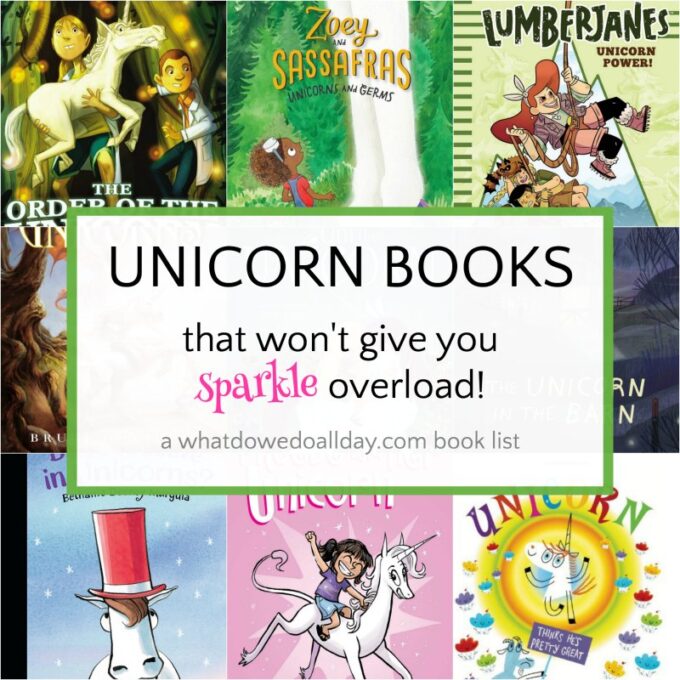 To give readers of all ages a new unicorn book to love, I've included my favorite choices for picture books, graphic novels and early chapter books, plus some middle grade titles.  And don't forget to print out our unicorn coloring page for extra fun! (Note: book covers and titles are affiliate links.)

Do You Believe in Unicorns? by Bethanie Murguia. This book is so much fun! A white horse wearing a hat prances around. But is it actually a horse? Perhaps it is a unicorn in disguise? Even when the hat comes off, clever illustrations make you wonder if that horse isn't actually a unicorn. Or is just your imagination? Children will love the humor and the way the story poses questions about perspective and reality.

Unicorn Thinks He's Pretty Great by Bob Shea. Like all Shea's books, this picture book about a unicorn who can make it rain cupcakes is quirky and funny. When Unicorn moves into the neighborhood, Goat is a wee bit jealous of all of Unicorn's seemingly great qualities. He doesn't think they will be friends but a goat-cheese pizza ends up bringing them together in a most amusing manner.

Phoebe and Her Unicorn by Dana Simpson. (Series) This graphic novel may have a pink and sparkly cover but don't worry—you won't drown in glitter and rainbows! After accidentally bopping a unicorn (named Marigold Heavenly Nostrils) in the face with a skipping rock, Phoebe gets a wish. She wishes for the unicorn to become her best friend! Your kids will love this funny graphic novel in which two lonely creatures forge a friendship.

Unicorn and Germs by Asia Citro. Citro's Zoey and Sassafrass series is geared towards early chapter book readers and has a strong STEM theme. In each book Zoey must use the scientific method to solve a problem faced by a magical creature. In this installment, Zoey helps cure a rather large unicorn who finds its way into her backyard.

Into the Land of the Unicorns by Bruce Coville. Cara enters Luster, the land of the Unicorns, where she meets Lightfoot, a rebellious unicorn. Together, with several other mythical creatures they set off to find the Unicorn Queen on their quest to save the unicorns. This is an older series (1994), but still engaging for kids ages 8 and up.

The Order of the Unicorn by Suzanne Selfors. This is book 4 in The Imaginary Veterinary, a series my kid absolutely loves. It is an excellent series with magical creatures, humorous adventure and a bit of mystery. In this installment, Pearl, Ben and Dr. Woo head into the the Tangled Forest on the hunt for a lost unicorn foal. But they must be wary of notorious poacher, Maximus Steele! Great fun.

LumberJanes: Unicorn Power by Mariko Tamaki. Lumberjanes is better known as a graphic novel series, and this, the first in a novel version of the series, will appeal to both new and old fans. The five scouts, Jo, April, Molly, Mal, and Ripley, are spending their summer at Miss Qiunzella Thiskwin Penniquiqul Thistle Crumpet’s Camp for Hardcore Lady Types. This summer they are working on their Living the Plant Life badge and during an outing come across super cute but super stinky unicorns. Great fun. Ages 8 and up.

Unicorn in the Barn by Jacqueline K Ogburn. This is a lovely story about Eric who discovers his new neighbor is a vet with a talent for caring for mythical creatures. The vet's daughter, Allegra, and Eric discover that unicorn's hair has healing powers and they use it to help the animals in the clinic. When Eric takes his ailing grandmother a bracelet made out of unicorn hair he learns not everyone can be cured, but his grandmother tells him a valuable secret about their family. Ages 8 and up.

The Last Unicorn by Peter S. Beagle. While it is best for older kids, this is a classic unicorn book I simply can't overlook. The last unicorn is searching for her fellow unicorns. Most people can't recognize her as a unicorn but she is still captured by a carnival woman then freed by a magician who joins her on her journey, along with another woman, Molly Grue. Before the unicorn is able to free the other unicorns she must face evil King Haggard's vicious Red Bull. Best for ages 11 and up.

More book lists you will love:

Subscribe to our newsletter and as a thank you, receive 10 waiting games kids can play anytime anywhere.
Your email will *never* be shared or sold to a 3rd party. Click here to view our privacy policy.
« DIY Magnetic Bookmarks: Easy Craft for Kids Who Love to Read!
Native American Folktales for Kids - Written By Native Authors »
133 shares