×
You are here: Home / Books / President Books for Middle Schoolers to Help Them Think Critically

In my previous list of children's books about the US Presidents, I focused on recommending nonfiction picture books and biographies suitable for elementary aged school children. On this list you will find president books for middle schoolers ages 10-14, or 6-8th grade. 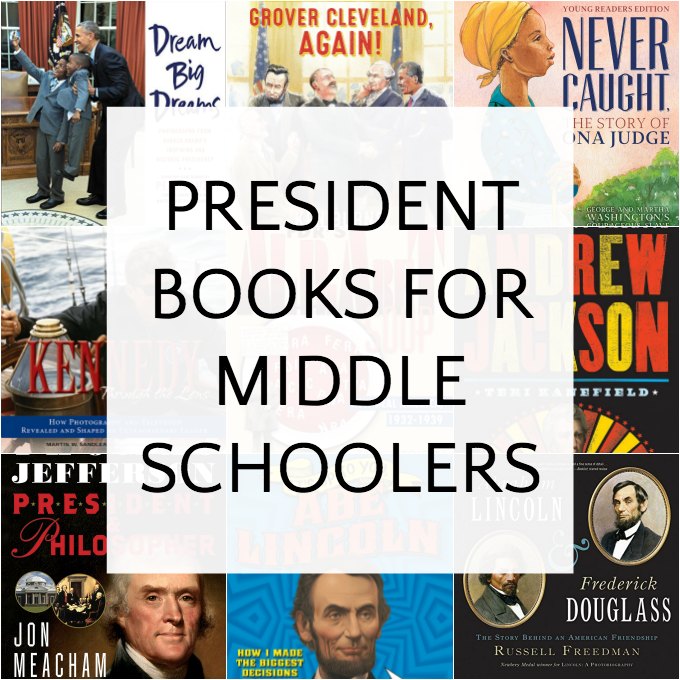 I'm not a historian so I couldn't judge each title by its historical accuracy, but I did glance at the professional reviews to ensure the books were not egregiously incorrect. While looking for titles, I sought out president books for middle school that emphasized both the leadership qualities as well as the problematic aspects of each man. I don't think we should teach out children to lionize presidents as flawless leaders or "founding fathers."

Rather, in order to learn from history, our children should think critically about the events of the time so that can put each president's actions (or lack of action) into context. Children can then form more educated opinions about who the men (hopefully one day that will include women!) were, or were not. (Note: book covers and titles are affiliate links. As an Amazon Associate I earn from qualifying purchases.)

Grover Cleveland, again! : a treasury of American presidents by Ken Burns. This book dedicates two full pages to each of the first 44 presidents of the United States. Cleveland, the sneaky devil, gets four pages. A book such as this cannot aspire to give a thorough biography of each individual, yet Burns gives a concerted effort to present a balanced portrait of both troublesome and positive qualities of each elected leader.

Never Caught, the Story of Ona Judge: George and Martha Washington's Courageous Slave Who Dared to Run Away (Young Readers Edition) by Erica Armstrong Dunbar and Kathleen Van Cleve. It may seem strange for me to include a biography of Washington's slave, rather than the man himself, on a list of books about presidents for middle grade students. However,  your children will come across much material about Washington in their lifetime and this book is just as important than any book about George. Dunbar and Van Cleve have written an extremely readable biography detailing what Ona Judge's life would have been like, how the Washingtons viewed slavery, how they treated their slaves, and crucially, how they pursued Judge after she escaped. This book is an eye-opener for children whose views of Washington were formed around the cherry tree myth. Did you know Washington attempted to break his own fugitive law in order to capture Judge? Not exactly the picture of a fair and just leader. That said, even though the author's sympathies clearly lie with Judge, the book does not demonize the president.

Thomas Jefferson: President and Philosopher by Jon Meacham. This is a young readers edition of Meacham's Thomas Jefferson: The Art of Power. It tries to be a comprehensive look at Jefferson's life, which I always find a difficult choice because it is hard for a biography to be all things. But Meacham is intent on describing the contradictions of Jefferson's philosophies and actions, especially regarding slavery. Still, it is an excellent introduction for middle schoolers to the third president of the United States.

Andrew Jackson (The Making of America series #2) by Teri Kanefield. Jackson is everyone's least favorite president, and this biography won't make him a hero in anyone's eyes. The period when Jackson was in office was a very important one in terms of determining the path of the country and so middle school students should learn about the events of the time and how Jackson's decisions regarding such items as the Indian Removal Act and the Nullification Crisis changed history.

It's Up to You, Abe Lincoln by Leila and Tom Hirschfeld. Kids tired of the same old nonfiction format? Try this title on for size! 10 chapters cover ten important moments from Lincoln's life and his decisions surrounding each one. Each chapter is written as if the narrator is speaking directly to Honest Abe. The chapters discuss Lincoln's tough decisions, and their repercussions with humor. But despite the seeming irreverence, the reader comes away with a wealth of knowledge about the serious and complex issues Lincoln faced. Highly recommended.

Abraham Lincoln and Frederick Douglass: The Story Behind an American Friendship by Russell Freedman. The book compares and contrasts the two great men and examines the development of their friendship. The men only met several times but exchanged ideas that helped to bring about the end of the Civil War and slavery. Superbly written and sourced with historical documents. Incidentally, author Freedman has a large oeuvre of historical nonfiction books for kids on a variety of subjects that are worth searching out.

FDR's Alphabet Soup: New Deal America 1932-1939 by Tonya Bolden. As the title reveals, this accounting of FDR's presidency focuses on his domestic policy and stops before America's entry in the Second World War. Readers will learn about the programs instituted by FDR's administration as a result of the Great Depression, how those programs affected different sections of society, as well as looking at how opposing factions viewed the New Deal.

Kennedy Through the Lens: How Photography and Television Revealed and Shaped an Extraordinary Leader. This was a fascinating book and my kids enjoyed looking at the photos and we used them to discuss Kennedy's legacy as a President and the big role the visual media plays in current presidential life. My astute 10 year old drew parallels between JFK's children and the Obama girls. It's also a gorgeous book. Sandler has another book, Lincoln Through the Lens: How Photography Revealed and Shaped an Extraordinary Life.

Dream Big Dreams: Photographs from Barack Obama's Inspiring and Historic Presidency (Young Readers edition) by Pete Souza. I love following Souza on Instagram so I was delighted to see that he published a young reader's edition of his book documenting Obama's presidency in photographs. This is less of a biography of the Obama presidency in the traditional sense, but nonetheless a great way to learn about his historic presidency. Souza includes photos from key moments during Obama's two terms which highlight the positive qualities we look for in a leader. The focus is more on his interactions with others, especially children, and overall the book aims to inspire kids to "dream big." Dream Big Dreams is more suited to lower middle schoolers (but enjoyed by people of all ages!), while the upper grades will enjoy Souza's Obama: An Intimate Portrait.

And don't forget presidential picture books for kids, a book list which includes even more presidents! 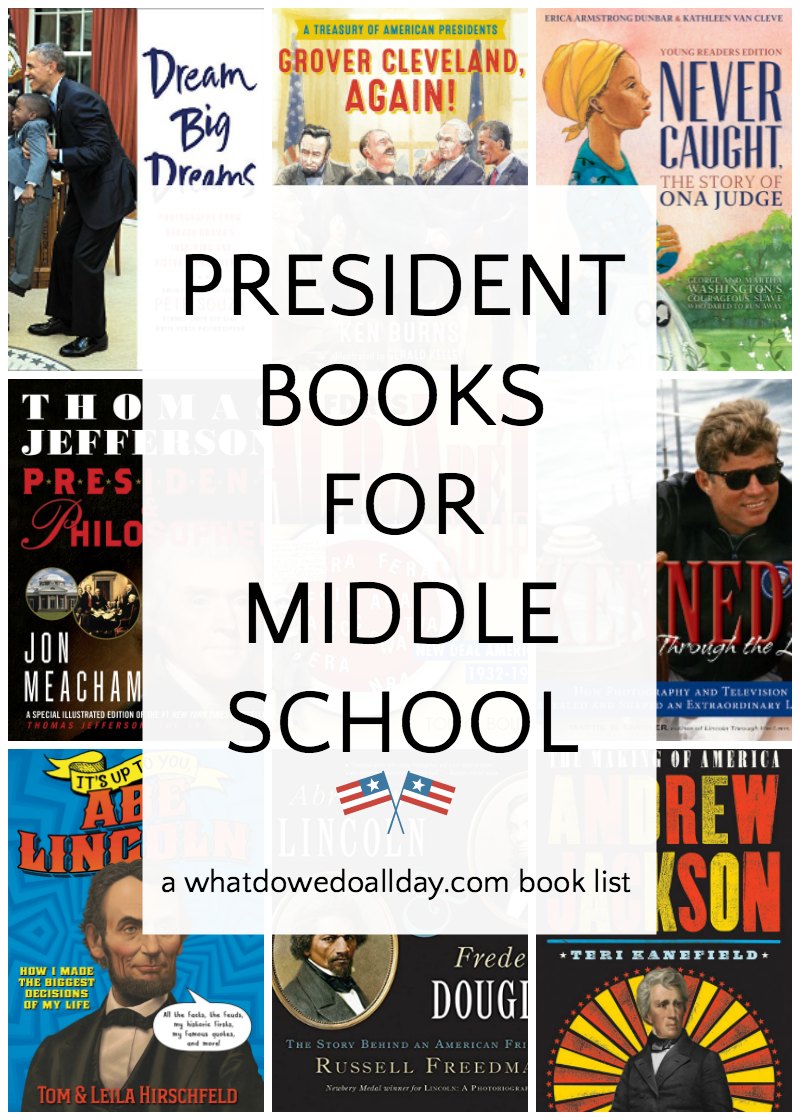 Subscribe to our newsletter and as a thank you, receive 10 waiting games kids can play anytime anywhere.
Your email will *never* be shared or sold to a 3rd party. Click here to view our privacy policy.
« Heart Animals Coloring Page and Stick Puppet Craft
Children's Books with Characters Who Have Medical Challenges »
275 shares