×
You are here: Home / Books / Children's Books with Characters Who Have Medical Challenges

We all hope that our children will live typical, healthy lives. Sadly, whether it is our own children, or their friends, sickness, chronic illness and even tragedy occur. Books about tough situations can give children a way of approaching difficult emotions that surround challenging medical conditions, whether that be a temporary sickness, chronic conditions like asthma or diabetes, or serious diseases like cancer. 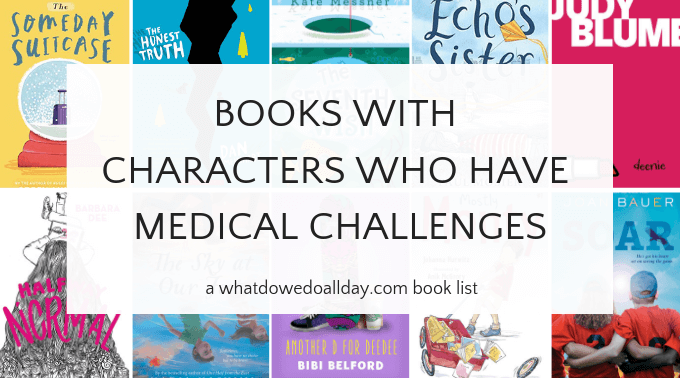 With this list of children's books with characters who have medical challenges, I have chosen to focus on middle grade novels. I looked for books to cover a wide range of medical conditions, from temporary to chronic but manageable to terminal illnesses. Some of the books focus on the perspective of the patient but others narrate the experience of those whose lives are affected when a loved one gets ill. (Note: book covers and titles are affiliate links. As an Amazon Associate I earn from qualifying purchases.)

Soar by Joan Bauer. I loved this book. Jeremiah's medical challenge is that he has a weak heart which keeps him on the sidelines. His adopted father moves a lot, and when they move to a new town with a demoralized baseball team embroiled in scandal, Jeremiah becomes the motivating coach they need to lift them up. Wonderful writing makes this a book not just for baseball fans. Ages 9 and up.

Halfway Normal by Barbara Dee. Norah Levy is retuning to seventh grade after spending two years in treatment for leukemia. Because of her sensitive immune system, her protective parents don't want her to rush into too many activities and Norah pushes back, wanting to join after school activities with her friends. Norah's tutoring pushed her into eighth grade math where she makes friends with Griffin, who doesn't het know about Norah's cancer and Norah hopes to keep it that way. Norah struggles to find out where she fits in and how she wants to claim her own identity. A thoughtful book that all middle schoolers will relate to. Ages 10 and up.

Lucky Broken Girl by Ruth Behar. In the 1960s, Ruthie and her family are recent Jewish-Cuban immigrants living in New York City. After a car accident, Ruthie suffers terrible injuries and she is placed in a full body cast. Confined to bed and totally dependent on others, Ruthie's physical world narrows, but as others come to visit her, Ruthie begins to collect stories and her emotional and intellectual world expands. The author based the story on her own experiences and this is a wonderful, moving book. Ages 8 and up.

The Honest Truth by Dan Gemeinhart. Matt's cancer keeps recurring and he is angry about his illness, often rude and bitter to others. Without telling his parents he leaves home with his dog, Beau, to accomplish his dream of climbing Mount Rainier. Only his friend Jessie guesses where he has gone and she struggles with keeping or revealing his secret. On his journey, Matt faces the hardship of his symptoms and encounters strangers who both help and hinder him. He eventually reaches the mountain but discovers that being alone is not the answer he was looking for. Ages 10 and up.

The Seventh Wish by Kate Messner. Charlie goes ice fishing and she catches a fish who says it will grant her wishes if she will release him back into the water. Charlie hopes for a lot of things, both for herself and for her friends, but the most poignant of all involves her sister. Abby is in college and is struggling with an to heroin. Abby's disease disturbs the whole family and Charlie experiences dashed hope and false promised. The topic of opioid addiction may not be something you wish to read about in a children's books, but millions of children see it in their lives and Messner has tackled the subject with age-appropriate sensitivity. Ages 9 and up.

The Someday Suitcase by Corey Ann Haydu. Clover and Danny are such close friends that Clover is convinced they have a symbiotic relationship -- a word she learned in her favorite class, science. When Danny faints in class one day it signals the start of a mysterious medical condition. As doctors struggle to diagnose Danny, Clover sets out to use scientific inquiry to solve the mystery but what she notices is that Danny only feels better when Clover is near. Eventually Danny learns that he has a serious autoimmune disease and he and Clover run away with the hope that a clinic in Vermont can cure him. This book has no happy ending but uplifts the magic of friendship and love. Ages 9 and up.

Forget-Me-Not by Ellie Terry. Calliope June and her mother move around a lot. They have just moved again and Calli (as she likes to be called) hopes that for once, they can stay long enough to have a normal life. Calli narrates her story of living with Tourette syndrome; she tries to hide her tics by wearing loud, vintage clothing and she must deal with the teasing comments from classmates. Calli's voice is written in verse, and her neighbor and new friend's point of view is written in first person prose. The alternating voices make for a great reading experience and although Calli's TS experience may be less common, the themes of friendship, family and fitting in are universal to every young reader. Ages 9 and up.

Echo's Sister by Paul Mosier. 12 year old Laughter, or "El" as she now wants to be called, is starting a new school and looking forward to making new friends when her younger sister is suddenly diagnosed with a cancerous tumor in her mouth. Shock gives way to powerful emotions as El navigates both the practical and emotional difficulties of having a family member undergoing cancer treatment. Her new friend, Octavious, who understands what she is going through, is a welcome comfort. Her sister's prognosis at the end is hopeful, if not quite definite. Ages 8 and up.

Another D for DeeDee by Bibi Belford. Fourth grader DeeDee starts a new school year with multiple challenges. Her family has just moved after their trailer home burned down, her father is missing in Mexico and she is diagnosed with diabetes. DeeDee struggles with making good choices for her own health and doesn't always do the right thing when it comes to her new friend River, who has cochlear implants. DeeDee would seem to be an unattractive heroine but her responses to her challenging environment are read and her struggles with self-esteem move her forward as she grows. Ages 10 and up.

Squint by Chad Morris & Shelly Brown. 13 year old Flint, whose nickname is Squint on account of an eye disease (insert) is working on a comic book for a competition he hopes to win. At school he meets a girl, McKell whose brother is suffering from progeria, a disease where the patient prematurely ages. When Flint's eye condition worsens he must undergo a corneal  transplant. After the operation he is amazed at the clarity of vision in his "new eye" but dismayed to see that his comic is not drawn as well as he thought. Together with McKell he works to finish his comic, while she completes challenges of her own. Ages 10 and up.

The Mighty Heart of Sunny St. James by Ashley Herring Blake. I haven't been able to get my hands on this book yet, but am including it anyway since it has excellent reviews and will update when I've read it. Sunny St. James is recovering from heart surgery and decides on a new "Life Plan" with the intention of experiencing life to the fullest. Ages 10 and up.

The Sky at Our Feet by Nadia Hashimi. Jason was born in America, but he learns that his single mother is in the country on an overstayed visa from Afghanistan. When he sees is mother being led away he panics and an accident lands him in the hospital where he meets Max, a girl with epilepsy. The two team up to escape and find Jason's aunt, which takes them on a nail-biting journey around New York City. This is not just an engrossing story, it is an important one. Ages 9 and up.

Mostly Monty by Johanna Hurwitz. Suitable for ages 6-10, this three book series skews towards a younger audience than the rest of the books on this list. Monty is a typical book-loving first grader except that he has asthma, which prevents him from engaging in some of the rowdy play with the other children. For another chapter book series with an asthmatic hero, check out Bobby the Brave (Sometimes).

Braced by Alyson Gerber. After making this list, I read Gerber's Braced, based on her own experience growing up with scoliosis. Although I'm not removing Blume's Deenie from this list, I recommend Braced as the better book. 7th grader Rachel is an enthusiastic soccer player but this year her doctor tells her she must wear a corrective brace for her scoliosis for 23 hours of the day. Understandably, she is devastated by this. Rachel's journey to acceptance of her condition is touching and relatable as she works through relationships with her classmates and mother. An excellent read.

Deenie by Judy Blume is a book many of us grown-ups will have read when we were middle schoolers. Do you remember the gym class scoliosis examinations? Most of us pass the test with flying colors, but not Deenie. Diagnosed with an S-curve spine, Deenie must wear a brace straighten her out. Admittedly, I don't think this is Blume's best book, and unfortunately some parents tried to censor it because of the passages in which Deenie touches "her special place," and yet Deenie's experience dealing with her new medical condition is memorable and relatable. Ages 10 and up.

More books that help develop compassion for others: 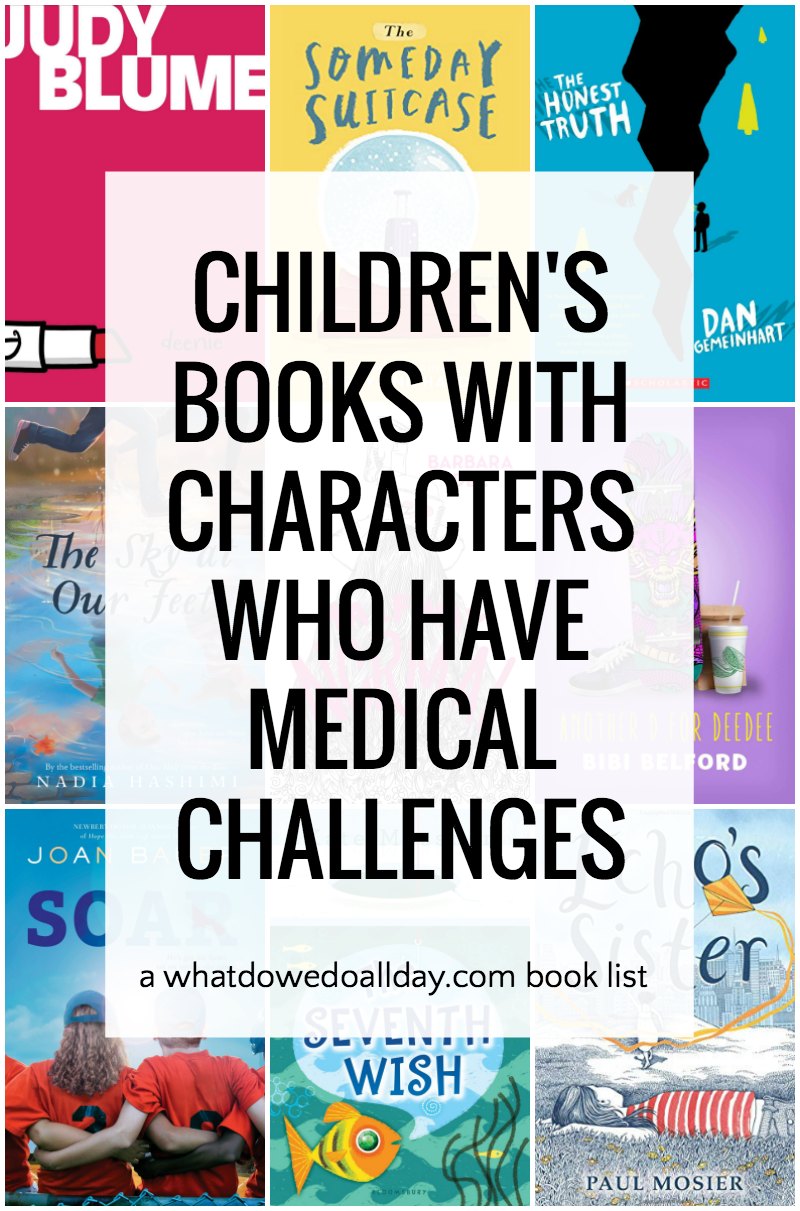 Subscribe to our newsletter and as a thank you, receive 10 waiting games kids can play anytime anywhere.
Your email will *never* be shared or sold to a 3rd party. Click here to view our privacy policy.
« President Books for Middle Schoolers to Help Them Think Critically
9 DIY Bookmarks for Kids: Never Lose Your Place Again! »
1135 shares