You are here: Home / Books / Picture Books for Labor Day: The History of Solidarity
623 shares

Labor Day is more than the last hurrah before school starts, it is bigger than the last barbecue when the weather is still warm. It is And it’s not a holiday were we celebrate professions and careers. It is a day when we remember the sacrifices that working men and women made to advance the cause of labor fairness and labor safety and social justice for workers in the United States. 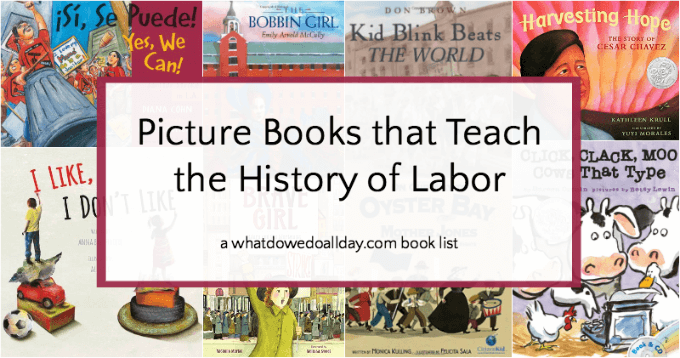 That struggle is ongoing to day, and so while the majority of these books address a historical event I encourage you to talk to your children about the similarities and differences with today’s labor issues. Using picture books to teach about the history of solidarity, labor unions and the fight for fair labor practices is a great way celebrate Labor Day! (Note: book covers and titles are affiliate links.) 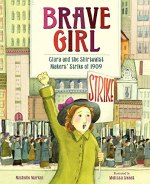 Brave Girl: Clara and the Shirtwaist Makers’ Strike of 1909 by Michelle Markel, illustrated by Melissa Sweet. Clara comes to NYC dirt poor but full of grit. She works a miserable, backbreaking job at a garment factory. An extraordinary individual, she taught herself to read and led the largest walkout of women workers in U.S. History, despite being beaten and jailed for participating in labor strikes. Melissa Sweet tells a valuable story of the history of women workers and the importance of fair labor practices. It is a story which still resonates today. Ages 5 and up.

Harvesting Hope: The Story of César Chávez by Kathleen Krull, illustrated by Yuyi Morales. I’m quite a fan of illustrator Yuyi Morales, which is why I chose this particular picture book about civil rights leader Chávez. The biography begins with Chávez as a young boy, who was “not a fighter,” and follows him as his family leaves Mexico during the drought. When they arrive in California the family experiences the hardship, racism and brutal treatment rained down on migrant workers. Chávez was roused to take action and organized a 340 mile peaceful protest march on behalf of farmworkers. Ages 5 and up.

Dolores Huerta: A Hero to Migrant Workers by Sarah Warren, illustrated by Robert Casilla. While many are familiar with Chávez, Huerta is another civil rights leaders who will inspire kids. Warren portrays Huerta in her many roles from a teacher to parent to protester and more. Her strength and determination to help the farmworkers led her to help organize a strike so they could achieve better working conditions and fair treatment under the law. The book includes great supplemental information in the afterward. Ages 6 and up. 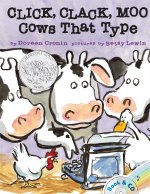 Click, Clack, Moo: Cows That Type by Doreen Cronin, illustrated by Betsy Lewin. If you want to raise kids who won’t let their future employers walk all over them, read them this modern classic about a group of determined barnyard animals who persevere to get what they want, despite a grumpy farmer. Ages 4 and up. 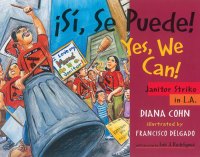 ¡Sí, Se Puede! / Yes, We Can! by Diana Cohn, illustrated by Francisco Delgado, is inspired by a real life janitor strike in 2000.  The story centers on Carlitos, whose mother is a night janitor who cleans a skyscraper in Los Angeles. I like the family touches, like when mama tucks Carlitos into bed every night before she goes to work. It personalizes the story so kids will be able to relate to the characters, even if they may never find themselves in a similar economic situation. Mama helps to organize the janitor strike, and a passionate Carlitos who “loves his mama” gets involved. A bilingual book. Ages 5 and up.

Which Side are You On? The Story of a Song by George Ella Lyon, illustrated by Christopher Cardinale. Well, I’m embarrassed to say I’d never heard of this book’s titular song. Florence Reese wrote the 1931 song and it has become a ballad sung worldwide in support of workers’ rights. Florence’s husband was a coal miner and the story of the coal miners’ strike is told through the eyes of Florence’s daughter. I recommend this book for ages 8 and up because of the depiction of the gun fire that was rained down on the miners. Nevertheless, it is an important story that deserves to be remembered.

Kid Blink Beats the World by Dan Brown. Kids will enjoy this book about the newspaper boys and girls who went on strike in 1899. The newsies were protesting the attempt by the big newspaper publishers to squeeze more money from them. Brown writes a lively story that is wonderfully effective at explaining the economics of what a penny might mean to the working class, and the ending teaches the importance of compromise between labor and business.  Ages 5 and up.

The Bobbin Girl by Emily Arnold McCully. In 1830s New England young women toiled at the textile mills under harsh conditions. 1o year old Rebecca, whose mother runs a boarding house for the girls who work in the mills, is one of them. Rebecca observes harsh working conditions, poor wages and compassion-less employers. But she also witnesses the strength of women banning together to protest against the mill owners and fight for fair labor practices. Ages 6 and up.

On Our Way to Oyster Bay by Monica Kulling, illustrated by Felicita Sala. This is the story of march led by labor organizer, Mother Jones.  In 1903, Mother Jones organized a children’s march to Oyster Bay, the home of then-president Theodore Roosevelt to bring awareness to the plight of children working in the textile mills.  Two young children narrate the journey, from making the signs, to camping out to meeting and learning from others along the way. Ages 7 and up.

A Long Hard Journey: The Story of the Pullman Porter by Patricia and Fredrick McKissack I was quite disappointed to find that there is no picture book about the Pullman porters for elementary aged kids! I think it is such an important moment in the history of labor, that I am including this excellent history, although it is best for ages 12 and up. After the Civil War, former slaves went to work as porters on sleeper cars. The Brotherhood of Sleeping Car Porters was the first major black labor union who went up against their unfair treatment by the railroad magnates. A. Phillip Randolph led a tireless battle that lasted for 12 years. This account is excellent and includes fascinating photographs and first hand accounts.

Picture Books about Labor – outside the U.S.

The following books about child labor are good conversation starters about the current, global problem of child labor.

Yasmin’s Hammer by Ann Malaspina, illustrated by Doug Chayka. In Bangladesh, Yasmin would prefer to go to school, but she must work to help her family. All day long, while she hammers at bricks, Yasmin dreams about what she would like to do if she could go to school. Yasmin and her sister both work in the brickyard in the hot son, as the boss lounges under and umbrella. Yasmin’s determination to make extra money just to buy a book is inspiring and heartbreaking at the same time. Ages 5 and up.

I Like, I Don’t Like by Anna Baccelliere, illustrated by Ale + Ale. With spare text this book speaks volumes. Contrasting images illustrate the differences between the privileged child’s life and the life of child who must work. “I like rice” show a child enjoying meal. “I don’t like rice” depicts a child working in a rice field. This is an excellent early book to help children gain perspective and empathy.  Ages 4 and up.

Malala, a Brave Girl from Pakistan/Iqbal, a Brave Boy from Pakistan: Two Stories of Bravery by Jeanette Winter is actually two books in one. Both extraordinary protagonists figure in the fight for the rights of children. Iqbal fought for child-labor rights in Pakistan but was tragically shot and killed at the age of 12. The stories are well written with simple, yet effective text but parents may decide the seriousness of the subject matter means this book is best for older kids. Ages 6 and up. 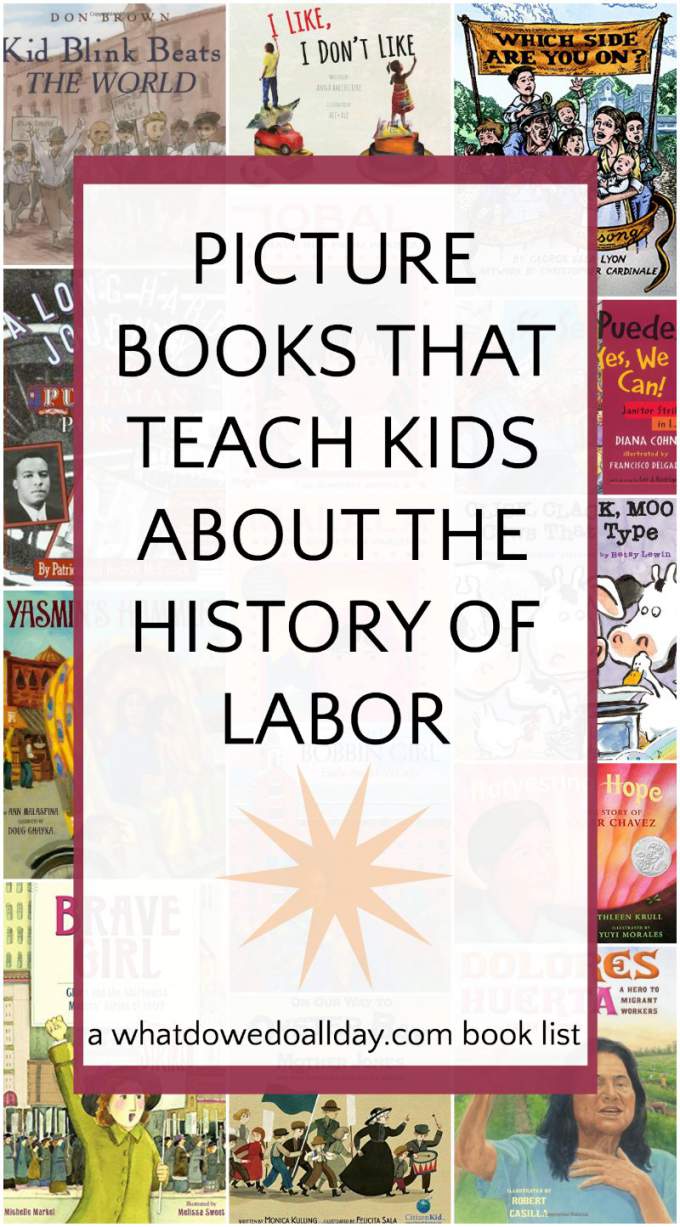 Subscribe to our newsletter and as a thank you, receive 10 waiting games kids can play anytime anywhere.
Your email will *never* be shared or sold to a 3rd party. Click here to view our privacy policy.
623 shares
« Science-Themed Early Chapter Books for Kids
Children’s Books with Latino and Hispanic Characters »