Why do kids love animal stories? A well written novel with animals as the main characters allows the reader to consider human society, emotions and behaviors from an outside perspective. And animal protagonists are not just for picture books, these middle grade animal books for tweens will appeal to kids ages 8 and up. 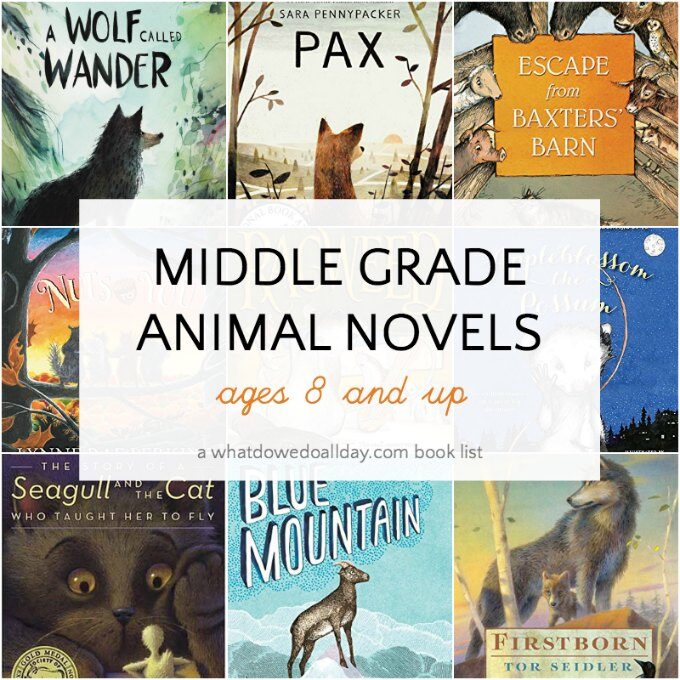 You may notice your famous and favorite animal novels missing from this list. That’s because they are already famous!

I had several criteria. One, the book must not be something that everyone has already heard of and read. Two, the book must be written from the animals’ point of view (there are a few books which also include a human p.o.v.).  Did you know there is actually a word for this? Xenofiction.

Finally, the story must be on this side of realism. That is to say, books in which animals who wear clothes, talk to humans, write letters or play instruments are (mostly, but not completely) left off the list.

I highly recommend any of the following animal books as a read aloud!

A Wolf Called Wander by Roseanne Parry. I loved reading this book and when I can to the endnotes I was delighted to learn that Parry based her book on a real-life wolf that scientists have been tracking! At the age of two, Wander’s (known as “Swift” in the beginning of the story) pack is attacked by a rival wolf pack and Wander is separated from the rest of his pack. Unable to learn the fate of his family, Wander sets out on a journey of survival. The wolf narrates his own tale and–wow–is it fascinating. Full of observations about other wildlife, the impact of humans, and the perils of life as one of nature’s most important predators, your kids will love this story.

Blue Mountain by Martine Leavitt is the story of Tuk, a bighorn sheep who has a vision of a blue mountain. When the valley where his tribe feeds in winter grows bare and domesticated sheep bring disease, Tuk decides to lead his fellow bighorn to the blue mountain. Some are doubtful of Tuk’s promise of success and stay behind, but a small group of travelers set out and traverse a path beset with predators and dangers. Tuk manages to outwit bears and wolves and lead his followers in his hero’s quest. When they arrive at the blue mountain, Tuk turns back to fetch the rest of the herd.  With its poetic text and interesting characters, Blue Mountain is a great read aloud.

Tales from Dimwood Forest (series) by Avi. This is an exception to one of my rules, for there is a bit more anthropomorphization going on than I would have liked, but I couldn’t resist since I love this series so much. Ragweed is a mouse who craves adventure. He leaves his family, hops a train and lands in a town where he makes friends with other mice, learns a lot about life and helps foil the local cats.  Avi’s ability to convey complex human emotions and discuss subject matter like fear, death, ambition, love and friendship in a way that kids can understand and relate to is rather remarkable, especially given that the characters are all animals. Here’s a warning, though: Ragweed dies in the first chapter of the next book, Poppy. However, Avi’s brilliant handling of Poppy’s subsequent journey as a result of Ragweed’s death prevented my kids from finding the event traumatic. This series has quickly become one of my top recommendations for read alouds.

Nuts to You by Lynne Rae Perkins is a funny tale about adventurous woodland creatures. A group of friends head out into the unknown when their squirrel pal is carried off by a hawk. The  captured squirrel, manages to escape the hawk’s clutches and lands in an unknown area and befriends the local squirrels. The narration alternates between the quirky group of searchers and the lost squirrel. The disparate groups of squirrels come together as they learn of a threat even greater than hawks.

Appleblossom the Possum. Holly Goldberg Sloan wrote this clever and charming tale of young possum siblings making their way in the world. The story turned out to be surprisingly funny, too! Mama Possum teaches her children about how performance is an integral part of life as a possum and they all practice their acting skills, which come in handy on many occasions. When Apple Blossom falls down a chimney and is adopted by a girl with a longing for an attentive pet, her brothers enlist the help of their wayward dad and dance-floor loving mom to rescue her. I adored all the theater references and loved how much my boys laughed throughout the story.

Escape from Baxters’ Barn by Rebecca Bond.  An eclectic group of farm animals must escape a barn before it is burnt down because the down-on-their-luck farmers want the insurance money. The animals work together to come up with a plan to escape. We are especially enjoying all the personalities of the animals, and for a drama queen like me, as a read aloud book, this title provides a lot of material for funny voices!

The Story of a Seagull and the Cat Who Taught Her to Fly by Luis Sepúlveda. I read this book to both my boys (ages 7 and 11) at dinner and the story charmed us. A injured bird wants to save her progeny so she lands on a balcony and extracts a promise from Zorba, the resident cat, to look after her egg. The cat, unsure how to care for the egg consults the several of his neighborhood cat friends to help him. The menagerie of colorful characters take their research and duties seriously and together they keep the egg safe, raise the tiny hatchling and somehow manage to teach it how to fly. Wonderful.

Firstborn is by Tor Seidler, the author of The Wainscott Weasel, one of our favorite read alouds of 2015. Initially my then-11 year old read this book and afterwards he pronounced it “awesome!”, his younger brother insisted I read it. We actually ended up listening to it on audiobook, and my then-7 year old and I agreed with the “awesome” assessment. Maggie the Magpie narrates the story of how she leaves her familiar home and meets a group of wolves. Maggie is impressed with the wolves and decides to cast her lot with them. Her description of the wolves’ behavior is fascinating, as well as her admiration for one the the firstborn wolves, Lamar, who exhibits non-wolf like interests. This is a truly wonderful book for kids who are interested in the natural world, but the story also abounds in examples of the harsh realities of the natural world. So if you don’t want to read about eating prey, premature death or the thrill of the hunt, this is not the book for you.

The True Blue Scouts of Sugar Man Swamp by Kathi Appelt. Bingo and J’miah are two raccoons who descend from a long line of raccoons who are entrusted with the job of alerting the mythic Sugar Man in case of an emergency. They decide to do so when a band of feral hogs invade the swamp, their sights set on the sugarcane. Meanwhile, 12-year-old Chad is dismayed to learn that the slimy Sunny Boy Beaucoup wants to convert the swamp into Gator World Wrestling Arena and Theme Park.

Pax by Sara Pennypacker is a lovely book and told from both the human and animal perspectives. Peter rescued Pax when he was a small fox cub and the two are inseparable. One day Peter’s father enlists in the military (it is an unknown war in an undefined place and time) and Peter must go to live with his grandfather. Peter’s father insists that he abandon Pax in the woods. Peter is heartbroken and is unable to escape his grief and guilt at losing Pax. He runs away on a search to reunite with his one true friend. Along the way, he injures his foot and is taken in by a hermit, who has secrets of her own. In a parallel narrative, Pennypacker describes Pax’s encounter with wild foxes and his experience with the encroaching war. This is a powerful story with an unexpected ending. Parents will also enjoy this book so I recommend it as a read aloud.

Subscribe to our newsletter and as a thank you, receive 10 waiting games kids can play anytime anywhere.
Your email will *never* be shared or sold to a 3rd party. Click here to view our privacy policy.
366shares
« 20 Children’s Picture Books To Inspire a Love of Nature
10 Materials for DIY Math Games and Activities »