You are here: Home / Literacy / Learn to Read with Jokes: Laughter and Literacy Go Together
883shares

I wrote earlier about how I stopped forcing my son learn to read. For the last few weeks he has been making steady reading progress on his own. Because the boys have been particularly interested in telling jokes lately I went to the library to find a few joke books. I picked up an easy reader joke book, thinking that my son might actually try to read it, given his love of making other people laugh. 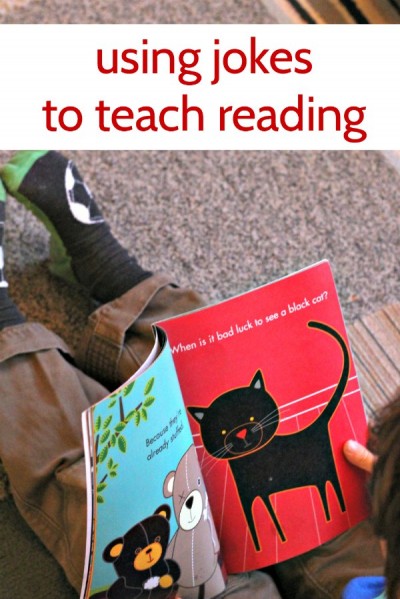 The boys and I have been using dinner time to tell jokes to each other. I brought out Get the Giggles: A First Joke Book, which is a Scholastic Level 1 reader (Always preview leveled readers because there is no publishing standard.) My 5 year old’s eyes lit up with the idea of being able to tell jokes that his brother and mom might not not already know the answer to! 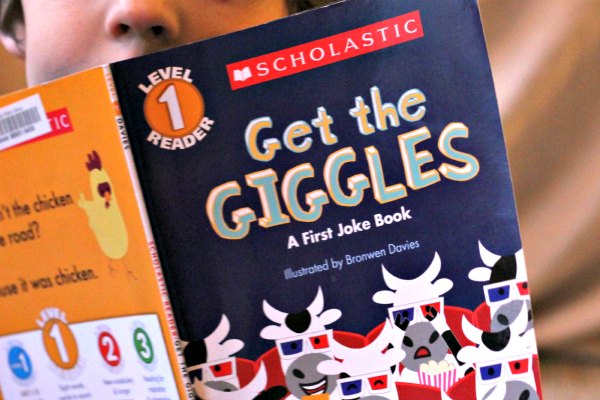 He read us every single joke! The first joke was so ridiculously silly that we all burst out into laughter and our response inspired him to continue. I was so proud of how he was motivated to figure out the words and learn to read all on his own. There were one or two which I had to help him with, words that he was unfamiliar with like “cheetah”, but unlike my previous attempts at helping him sound out words, he didn’t cry out in frustration, “I can’t do it! I give up!”

Side note: is my child the only one who constantly mixes up “what, when why and where”? I keep reminding him to look at the end of the word, too!

I also have to admit, the jokes were quite funny! He was also quite tickled to be able to make his brother giggle. I can only hope Scholastic comes out with more of these easy reader joke books.

So if you haven’t tried jokes to help your child learn to read, go ahead! Try it out. It may be just the thing.

Below find the joke book we read, plus a few easy reader book lists that may inspire your child who is learning to read:

Subscribe to our newsletter and as a thank you, receive 10 waiting games kids can play anytime anywhere.
Your email will *never* be shared or sold to a 3rd party. Click here to view our privacy policy.
883shares
« Ornament Coloring Page
Top Picture Books Lists of the Year »