×
You are here: Home / Books / Boost Self-Esteem with Children's Books about Being Different
1320 shares

Has your child ever come to you with anxieties about fitting in? Or that being different from the other kids is a bad thing? Feeling out of place is a common fear and not one that is always easily soothed since it can be so tied up with self-esteem. I hope this latest addition to my books about feelings series– children's books about being different –will be a helpful tool in talking to your kids about how being yourself and being unique is actually a really great thing.

With this list I aimed to include picture books that deal with a variety of issues that might make children feel different from others. The books look at different types of families, developmental differences, cultural and ethnic diversity, defying expectations, how self-esteem is linked to a feeling of being different, and more.  Teach your kids that being yourself is something to celebrate! (Note: titles and covers are affiliate links.)

It's Okay to be Different by Todd Parr. You can always count on author Todd Parr to have a book related to an issue about feeling good about yourself. If you are looking for children's books about being different, this is a great book to start with. With his trademark colorful illustrations, he shows that it's not just okay, but it' awesome to be different.

Good Little Wolf by Nadia Shireen. Rolf, the little wolf is very good; he lives with Mrs. Boggins and the two of them spend their time doing nice things. But does that make him a real wolf? Not according to the Big Bad Wolf, who convinces Rolf he must perform mean tasks in order to prove his wolf-ness. Rolf doesn't do very well and the surprise ending when the bully gets his comeuppance demonstrates it's better to be nice, especially if that means being different.

Not All Princesses Dress in Pink is one of my favorites on the list. The rhyming text and colorful illustrations depict a variety of girls engaged in all sorts of activities, from farming to ball-playing, from fighting evil sorcerers to skipping in the mud. The one thing they all have in common is that they don't wear pink, but they do wear sparkly crowns. It's a great message: that there is nothing incongruous about girls engaging in rough-and-tumble activities while still loving a bit of sparkle. I also appreciated the diverse ethnicities portrayed in the book.

The Color of Us by Karen Katz shows the world through the eyes of one girl as she looks at the people around her. She notices all the different skin shades of her family, friends and neighbors. All the skin colors are compared to food (peanut butter, honey, cinnamon, etc.), a common practice, but one I've always felt is awkward. (I'm probably in the minority.) Katz is mostly known for her baby and toddler books but she does well with this book for elementary aged kids.

Amazing Grace. Grace's favorite thing to do is act out her favorite stories (and aren't all children natural actors during pretend play?). She wants to play the role of Peter Pan in the school production, but her friends tell her she can't because Peter is a boy, and not black. Her grandmother, however, shows Grace that she can be anything she wants, if she puts her mind to it. It so happens that Grace makes a delightful Peter Pan.

Stella Brings the Family by Miriam B. Schiffer. Stella doesn't feel different than the other kids, but she realizes her parents are different from a lot of the other families she knows. Her school class is planning a Mother's Day celebration, so Stella comes up with a way to include her two dads. The lovely way the book communicates that Stella's dads can do all the things a mom can do sends a positive message that families may look different, but the love is the same.

Marisol McDonald Doesn’t Match / Marisol McDonald no combina. Red-headed half-Scottish half-Peruvian Marisol bounces off the page with great enthusiasm and loves her mismatched life. When her friend, Ollie, challenges her to “match”, Marisol finds she is unhappy with life as a conformist. This is a great story that emphasizes the importance of embracing and accepting one’s uniqueness. (Text is in both English and Spanish.)

Chrysanthemum by Kevin Henkes is a classic you may well have read to your kids already. Chrysanthemum loves her name -- until she hears her friends make fun of it. Then she worries about how different it is from the other "normal" names. A loving teacher helps both her and her friends embrace the beauty of all kinds of names.

Not Your Typical Dragon by Dan Bar-el. Crispin does not breath fire. He breathes things like whipped cream, bubbles and band-aids. (Which sounds way better to me, by the way.) Crispin thinks his differences make him a failure so he runs away. He meets a knight named (what else?) St. George, who is trying to live up to the standard ideal of what a knight should be. The two become friends and of course realize that it's their differences that make them unique and awesome.

Leo the Late Bloomer by Robert Kraus is a classic book about a charming tiger who doesn't quite develop at the speed of his peers. But that's okay, it doesn't worry his mom. She know that he has his own unique tiger-ness and will eventually get there.

Same Same but Different by Jenny Sue Kostecki-Shaw is about two kids, one in America and one in India, who are pen pals. The two boys like to do lots of the same activities, even though their countries have very different cultures. This is a great book for teachers and parents to use to talk to their kids about universal experiences and values.

As Lita Judge is one of my must-read children's author/illustrators, and Flight School does not disappoint. A young penguin may not have exactly the right body for flight, but he has the "soul of an eagle." Eager to enroll in flight school and learn what it takes to soar despite his differences, he is not discouraged. Fortunately, the other birds are so taken with his determination they do what it takes to make his dreams come true. Utterly delightful.

Ballerino Nate. After seeing a ballet, Nate begs his mom to sign him up for ballet class. Nate's his brother teases him and Nate starts to doubt himself a bit. Nate's mother remains supportive of his interest and encourages him along and Nate sticks with it, especially after meeting a professional male ballet dancer, a "ballerino". There is a darling illustration spread showing all the positions of ballet lined up against similarly numbered positions in other sports.

Calvin Can't Fly by Jennifer Berne. Instead of learning how to fly like his siblings, Calvin is a bookworm. He much prefers reading, but it does make migration a wee bit difficult. His siblings decide to help him, but they run into trouble on the way. But Calvin saves the day with his book learning. If your kids fall in love with Calvin (and I'm sure they will), be sure to read Calvin, Look Out! Side note: there are a surprising number of children's books about being different that feature birds!

The Story of Ferdinand by Munro Leaf. I'm sure you know the story of Ferdinand! It is a winner that never gets old and so clearly demonstrates how beneficial being different truly is.

William's Doll by Charlotte Zolotow. William wants a doll to take care of but no one seems sympathetic! His friends tease him and even his father continues to buy him stereotypical boy's toys in the hopes of squashing William's request. The only adult who understands William is his grandmother who buys William a doll so William can "practice being a good father."

A Mother for Choco by Keiko Kasza is a great book for discussion adoption with your kids. Choco is looking for a mom. Mrs. Bear looks very different from what Choco would expect his mom to look like, but then after meeting Mrs. Bear's other children it becomes clear that differences are a wonderful thing.

Spoon by Amy Krouse Rosenthal. Spoon is sad. He doesn't think he is nearly as exciting as the other cutlery, especially those amazing and exotic chopsticks! Well, it just so happens that the others are jealous of spoon. I mean, what could be better than dishing up ice cream? Spoon is a darling and hilarious look at discovering one's uniqueness.

Even though I just recommended Spoon by Amy Krouse Rosenthal, I can't help but also suggest Exclamation Mark. This funny take on one punctuation symbol trying to make his mark (pun!) can't be beat. Exclamation Mark's attempts to transform into something different fail, but when he finds his voice, he learns to embrace his uniqueness and the difference that sets him apart from others.

<
Nerdy Birdy by Aaron Reynolds. Nerdy Birdy doesn't fit in with the cool crowd: Cardinal, Eagle and Robin. He's different from them. He likes reading, and video games. Soon he finds a crowd just like him and it feels good to fit in. But when Vulture comes along, should he accept the new guy despite his differences? Well, what do you think?

The Pirate of Kindergarten by George Ella Lyon. Ginny loves books, and reading circle. But she has difficulty reading because she sees everything double. After the nurse discovers her condition during the school's vision screening day, the doctor prescribes an eye patch and Ginny embraces her new role as the pirate of kindergarten. While this is a story about a temporary special need, it will help kids look at how differences come in all varieties and to embrace the uniqueness of all children.

I'm Not by Pam Smallcomb. One girl describes all the amazing things her friend Evelyn can do, and how stellar she thinks Evelyn is. She feels a bit down because she doesn't see herself in the same way. She doesn't think she lives up to Evelyn's awesomeness. But in the end, it is Evelyn who shows her how unique and wonderful she truly is.

More book lists you will love: 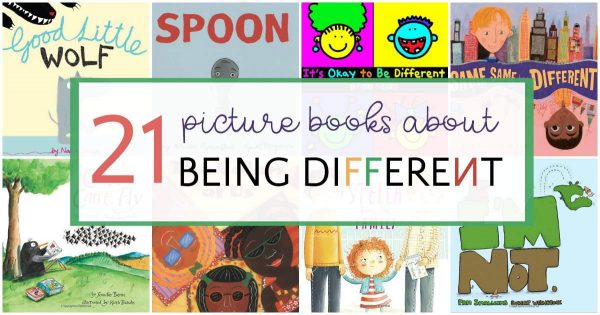