×
You are here: Home / Books / Fantastical Books for Kids Who Like Wings of Fire

Chances are, if your kids are 9 years or older, they've come across the popular middle grade series, Wings of Fire. I will confess, this is not my favorite book series. I was not surprised to hear that it was by one of the authors of Warriors. But I will not spend time on that. I am happy for any child to read the entire gazillion book series, if they so desire. But when they are done, hand them one of these exciting books which are perfect for kids who like Wings of Fire! 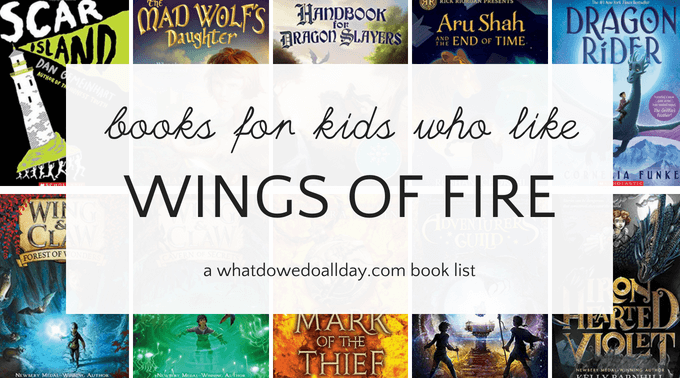 Are these Wings of Fire read alikes? Although several of them feature dragons, they are not all about violent dragon warrior clans. As I have done with all of my read-alike book lists, I chose books that have some of the reading elements of the book in question, but not the same plot points. So these books for kids who like Wings of Fire are thrilling adventures filled with conflict (fortunately not always as violent as Wings of Fire) and moral dilemmas.

Most, but not all, qualify as fantasies. I'm a big fan of taking a kid who has a passion for reading one type of book (e.g. dragon fantasies) and turning them towards another that will grab them in a similar way, so as to expose them to new genres. In any case, I hope you will steer your little Wings of Fire fan towards these books! (Note: book covers and titles are affiliate links.)

Mad Wolf's Daughter by Diane Magras. I quite enjoyed this 13th century tale set in Scotland about a girl warrior learning about what sets her apart from her brothers and father, even as she embarks on a treacherous journey to rescue them. Along her journey she must make choices based on her code of honor but she learns not all is as it seems and she has to decide what her values are. It is the first book in a trilogy.

Handbook for Dragon Slayers by Merrie Haskell. Aspiring author Princess Tilda is an independent-minded princess who has never even considered slaying dragons because of her disfigured foot. However, her cousin, Ivo, wishes to steal her kingdom and she ends up fleeing her kingdom.  The ensuing adventure involves magic, capture, a menacing Blue-beard character, and (of course) dragon slaying.

Dragon Rider (series) by Cornelia Funke. Kids who like Wings of Fire will like this dragon series, too. The last silver dragons are hiding in a remote region of Scotland. The dragon, Firedrake, and brownie, Sorrel, set out to find the Rim of Heaven, the ancient home the dragons where it is supposed that dragons will live in peace. On their journey a young boy, Ben, joins them and they go up against a silver dragon hunter who tries to thwart them at every turn. A page-turning adventure.

The Adventurer's Guild (series) by Zack Loran Clark. Zed and Brock, who would have preferred to join more profession-based guilds, are instead conscripted in the adventurer's guild, a ragtag group of humans and sprite-creatures that must guard the city against dangers. Their initiation into the guild is to spend the night outside of the city walls, a daunting prospect. I like the way the narrative shifts between the third person and first person recounting of the action, it keeps the reader on his toes! Highly suspenseful.

Scar Island by Dan Gemeinhart will remind readers of Lord of the Flies, only with a less disturbing outcome. When a freak (and I mean freak!) accident leaves all the adults of Slabhenge Reformatory School for Troubled Boys dead, the boys look forward to finally getting away from the wretched place of misery. But a few of the boys decide they would prefer a few days alone on the island before coming under the thumb of adults again. As you can imagine, things go awry in the power vacuum, and secrets previously kept hidden are revealed. It is a very compelling read and your child will have a hard time putting it down.

Iron-Hearted Violet by Kelly Barnhill. Princess Violet is not exactly the most traditional of princesses in the kingdom but she finds her way, anyway. When she and her best friend, Demetrius, discover a mysterious book and accidentally release a malignant spirit, Violet must reverse the magic. The court story-teller narrates the book, giving it an interesting narrative viewpoint, which comments on the nature of storytelling, and how we decide how stories are told and authenticated.

Forest of Wonders (Wing and Claw trilogy) by Linda Sue Park. Raffa, who is a prodigy apothecary, discovers a sinister government plot to enslave the animals. Raffa, with his knowledge of apothecary and botanical magic gets caught up in a secret web that involves a family member. Suspenseful and full of moral dilemmas, kids who are looking for Wings of Fire read alikes will love this trilogy, even if it doesn't involve dragon battles.

Aru Shah and the End of Time by Roshani Chockshi. My kids loved this adventure book and I love that the tale relies on Hindu mythology to take them on a fantastical journey. Aru has a tendency to stretch the truth, and while she is spending the school holiday at Museum of Ancient Indian Art and Culture (her mother is an archeologist), her classmates dare her to prove her claim that the Lamp of Bharata is cursed. But what happens next involves frozen classmates, the Hindu epic poem, the Mahabharata, a demon and the Kingdom of Death! Your kids will be counting down the days until they can read the sequel.

The Mark of the Thief (series) by Jennifer A. Nielsen. This incredibly thrilling trilogy is packed full of action and twists behind every corn. Nic and his sister are slaves in mines just outside of Ancient Rome. When Nic discovers an ancient bulla that once belonged to Julius Caesar, the bulla infuses him with a power. He becomes both a target and a pawn in a political conspiracy. This is a excellent selection for kids who like mythology. Best for ages 12 and up. 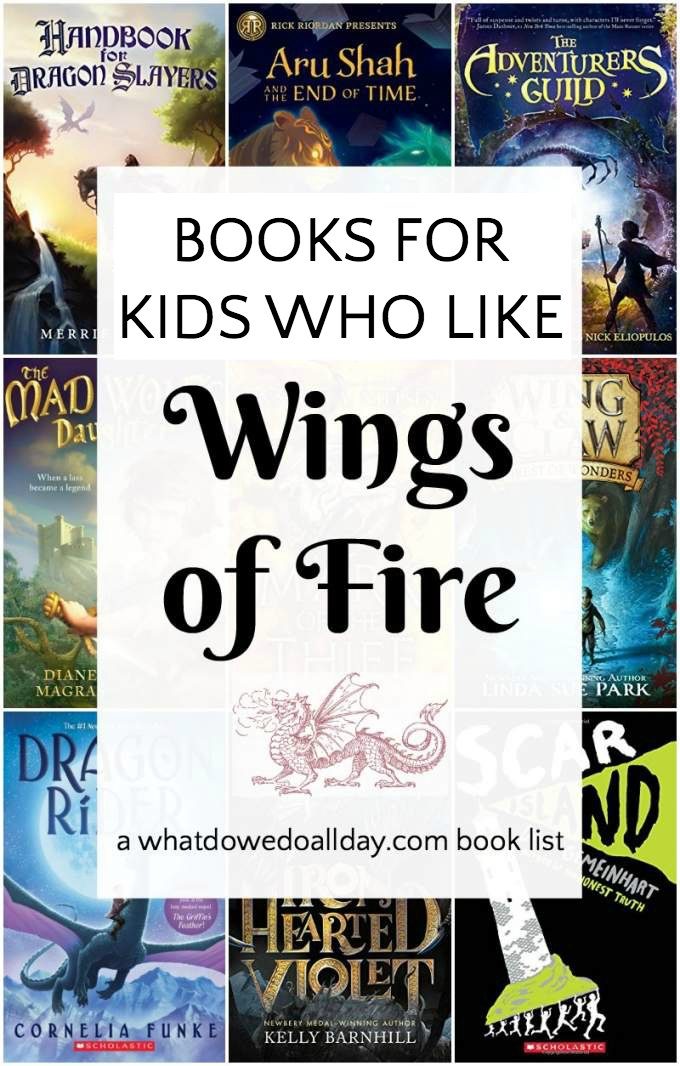 Subscribe to our newsletter and as a thank you, receive 10 waiting games kids can play anytime anywhere.
Your email will *never* be shared or sold to a 3rd party. Click here to view our privacy policy.
« Writing Journals for Children that Build Self-Awareness & Creativity
Cute Classroom Coloring Page: Homework Help from the Teacher »
2752 shares