Quick! How may different tag games for kids do you know?

As our family prepares to have an actually honest-to-goodness backyard I am putting together a mini series posts featuring backyard games for kids. Since tag games and similar chase games are such a classic way of bringing the neighborhood kids together for outdoor games and play, with no equipment necessary, it is a great place for me to start. 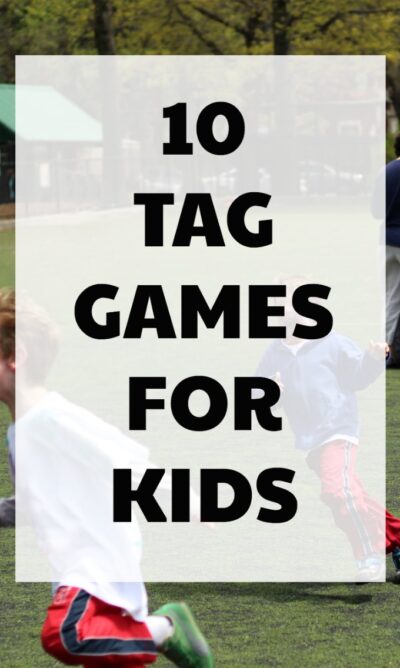 Moreover, if you are conducting your own DIY summer camp at home (<— click there to see all our ideas for that!), tag games and chase games are a great break for the kids, and all that running around will tire them out and make them more focused. Win-win, whoot-whoot, and all that jazz.

So, how many ways of playing tag can you name?

Here’s a few to get you (and us! I’m soooo excited!) started:

One player is It. When a player is tagged, he must remain frozen in place. He can be unfrozen if he is tagged by a non-It player. When all the players are frozen, a new It is chosen, and play begins again.

One player is It. When a player is tagged, he must remain frozen in place, with his legs spread apart, creating a tunnel. He can be unfrozen if a non-It player crawls under the leg tunnel. When all the players are frozen, a new It is chosen, and play begins again.

Two players are It. They hold hands and chase the other players. When they tag someone, that person joins hands with the pair. When another player is tagged he joins the group and they split into 2 “blobs” of 2 players. This goes on, with the “It” blobs splitting whenever they consist of 4 people, until all players have been tagged.

Play as described above, except that It never splits off, but continues to grow larger as players are tagged. Only the players on the end of the It Blob can tag someone.

Everyone, except 2 players, links arms with another player. Of the remaining two players, one is It and the other is The Chased. Whenever The Chased links elbows with a pair of players, the person on the other side of the pair must break off from the group. This player now becomes The Chased. If The Chased gets tagged, they become It.

One person is It.  If a chased player get tagged, she becomes frozen until she is tagged by another non-It player. To avoid being tagged, players can lay down on their backs with their hands and feet in the air. Players can only remain safe like this for 10 seconds.

Toilet Tag: (You read that right)

One person is It. When a player is tagged, he must squat down, as if on a toilet, and hold one hand out to the side like a handle. He can become un-frozen when a non-It player flushes the “handle” while making a “wooosh” sound. When all the players are frozen, a new It is chosen, and play begins again. Expect a lot of giggling.

What Time Is It Mr. Fox: (My kids love this and you can play with as few as three players.)

One player is Mr. Fox. The other players stand about 20-30 feet back from Mr. Fox in a straight line, facing Mr. Fox. The players call out, “What time is is Mr. Fox?” Mr. Fox answers with a time such as, “four o’clock!” (No fractions of the hour are allowed.) The players take the same number of steps towards Mr. Fox as the hours he called out (so in this case they would take four steps). If Mr. Fox calls out “Midnight!” all the players turn around to run back to the starting line without being tagged as Mr. Fox gives chase. If Mr. Fox tags someone, they become the Mr. Fox . (Note: feel free to substitute Ms. Fox for Mr. Fox.)

There are so many fun ways to play tag games for kids. Happy running! 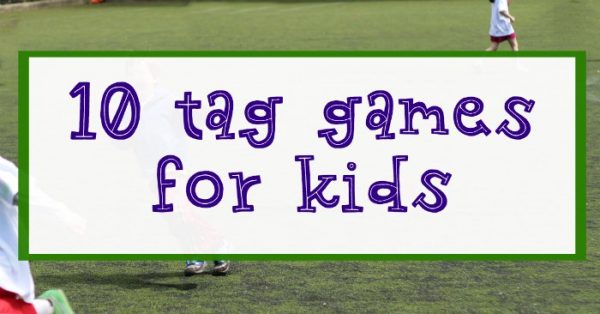 Subscribe to our newsletter and as a thank you, receive 10 waiting games kids can play anytime anywhere.
Your email will *never* be shared or sold to a 3rd party. Click here to view our privacy policy.
2624shares
« Game of the Month: Animalogic
Favorite Picture Books of 2016, Part 2 »