I bet you didn't know that cabbage is an indicator for acid and bases! This is such a fun at home science experiment to do with the kids. I admit, it wowed m a little bit (okay, a lot) as well as putting a big smile on my son's face. It wasn't too difficult to put together, although it does require a bit of preparation. It involved all of my son's favorite parts of learning about science:  a lot of mixing and magic and bubbling. 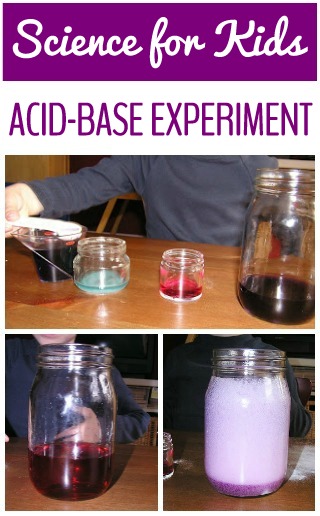 We found this science project in the book, Super Science Concoctions (affiliate link).The book calls it "Blue Brew" but I have no idea why since I can't imagine red cabbage turning water blue. Hello? It's purple, people.

Step one: chop up a cabbage and simmer 20 minutes to make a cool purple liquid. This step was surprisingly exciting enough for Kiddo! Who knew he'd be so fascinated by the fact that cooking cabbage would turn the water purple. 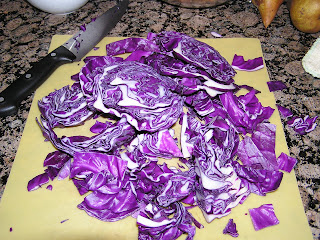 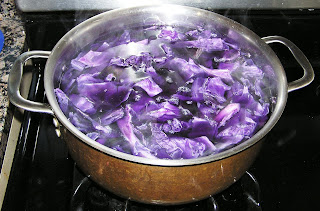 Step two: after the purple brew has cooled (we made it in the morning and then continued in the afternoon) collect some small and large jars. Place about ¼ tsp baking soda and ¼ tsp water in one jar, a small amount of vinegar in another and about ¼ cup purple brew in a third. 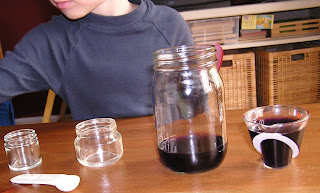 Step three: I put some of the brew in a measuring cup for Kiddo to pour and he scooped ¼ tsp of the brew in each of the first small jars. Witness the groovy color changes! 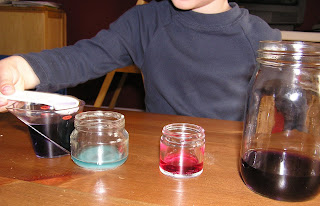 Step four: in the third jar he poured about ¼ cup vinegar, which magically turns the brew red! 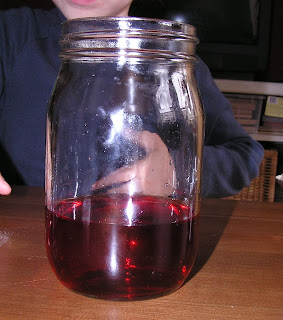 Then he put ¼ tsp baking soda in the same potion and after some delightful fizzing, the color reversed. 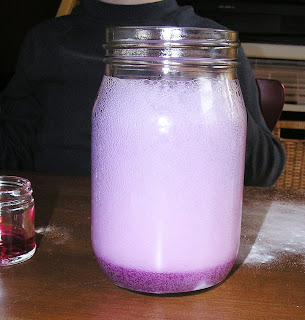 Step five: let Kiddo do whatever mixing he wants with the remaining solutions and watch various shades of blue, pink, red and purple come and go.

Kiddo became quite involved with this experiment and so I saved some purple brew in the fridge for another rainy day. The book suggests we also try mixing it with borax, cream of tartar, lemon juice, toothpaste, soap and other liquids and well as using it for making litmus strips for testing your food! Of course this experiment involves the concept of bases and acids and pHs, but since Kiddo is not yet 5, these concepts were over his head and we stuck to the fun part. 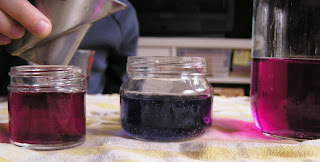 
Want Your Kids to Love Being Unplugged?

Subscribe to our newsletter and as a thank you, receive 10 waiting games kids can play anytime anywhere.
Your email will *never* be shared or sold to a 3rd party. Click here to view our privacy policy.
« Numbers Game
Storytime Trees »
3486 shares