You know those moments where you are thinking about how you just have to get something done? A phone call to the orthodontist, send off a quick business email, or carefully stir the beurre blanc on the stove.

Okay, I'm just kidding about that last one.

But you know where I'm going. Your kids have played a few rounds of Drop Dead dice game and now they are clamoring for something new and just as fun.

Here's what they should play: Martinetti dice game, also known as Centennial or Ohio. 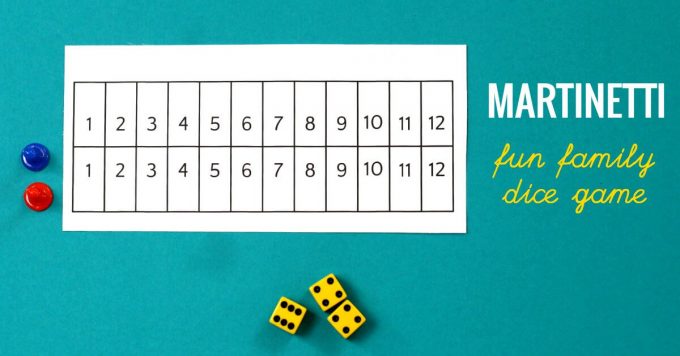 How to Play Martinetti Dice Game

Objective: To be the first player to climb up to 12 and back to start.

3 dice. You may have noticed that we have been playing dice games lately. Know what makes it even more fun? Colored dice. Everyone has their own colored dice (and then you know who is responsible for which dice when it comes to clean up, heh heh).

A game board. Draw your own (see photo for detail) or download our game board here: Martinetti Game Board

Each player on his turn throws the dice and moves forward on the board in order, according to the numbers on his dice.

A player must roll a 1 in order to move forward to the first space. He may continue moving forward if he also has a 2, and then a 3. If he can move forward on his turn, he gets to roll the dice again. If the dice do not allow him to advance, his turn is over and play moves, clockwise, to the next player. Players can use the numbers shown in a throw individually or by adding them. For example a roll of a 1, 1, 1 can become a 1 and a 2 (1+1=2).

The rules are best explained by example:

Player one rolls again. He rolls 6-1-5. He cannot advance.

Play now turns over to the next player.

In the below photo, red is on her way up to 12; blue has already climbed to 12 and has made the turn, heading back towards 1.  If red had rolled the 4-2-1, she could advance to space six because 4+2=6. She could then roll again. If blue had the roll, he would pass because no combination of 4-2-1 adds up to 9. 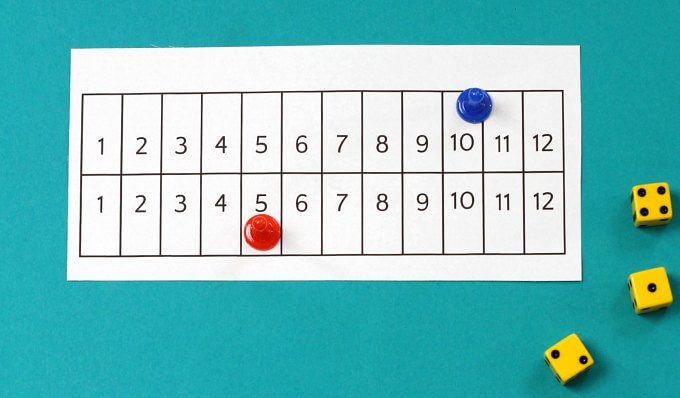 Variations of Martinetti dice to try:

Each player gets only one roll per turn.

Use 2 dice. This makes the game take longer. I will confess that I forgot that this game uses three dice and we played with only two dice for the longest time. It can be either fun or frustrating depending on your point of view because 12 can sometimes take a loooooong time to roll.

Each player can only advance one space per roll.

If a player fails to use a combination during his turn, another player can call out that combination and claim it for himself, thus advancing his own token. (I found this variation frequently cited in the traditional rules for the game, but we did not use it as it puts children with advanced math skills at an advantage and can cause tears if players are not equally matched.)

Watch the video to see the game in action!

Subscribe to our newsletter and as a thank you, receive 10 waiting games kids can play anytime anywhere.
Your email will *never* be shared or sold to a 3rd party. Click here to view our privacy policy.
« Children's Books about Women in Politics and Women Activists
4 Easy Ways to Limit Screen Time: Practical Ideas that Work »
18991 shares