If you are like me, you've heard of magic squares but you've never actually tried your hand at solving one. Since this week's theme for Camp Mathematics is computing I figured getting my kids to try their hand at a magic square math puzzle would be a good a mathematical recreation activity. After all, my eldest son can't resist a good math challenge and my youngest can't resist whatever his big brother is doing. 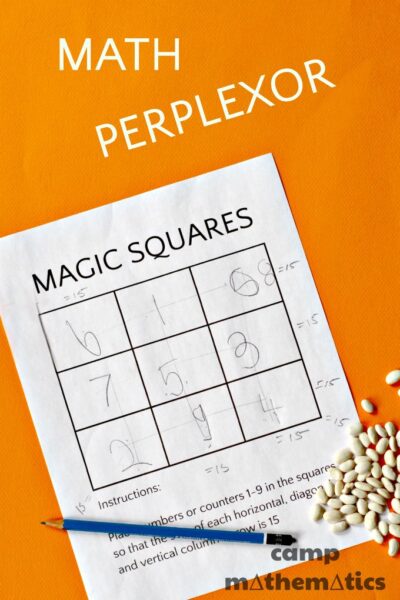 (Whisper voice: After you read this post, don't forget to get another hands-on math game at Coffee Cups and Crayons, our Camp Mathematics partner.)

Although there are numerous (pun!) variations of magic squares, I decided to keep it simple with a 3x3 square, especially since my 6 year old would want to try it. For more magic square fun, see the extension ideas, below.

What is a magic square?

Magic squares are grids in which distinct numbers are arranged so that the sum of the numbers in each row and column is always the same.

You can, of course, whip up your own magic square template with a few strokes of a pencil, but I've also made a snazzy magic square printable you can print out for free. Get it here --> Magic Square Printable.

How to do a 3x3 magic square math puzzle

Using the numbers 1-9, place numbers in the squares so that the sum of any three numbers in a horizontal, vertical or diagonal row equals 15. You may only use each number once.

TIP: For younger kids, start out by placing a five in the center square. 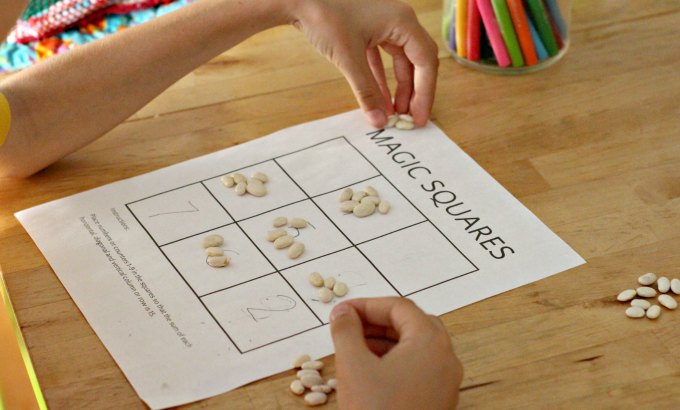 Notes from our experience:

My 10 year old got stuck at first, but what helped him out was using counters instead of numerals. This way he didn't have to keep erasing.

I worked on the puzzle with my 6 year old. It was excellent math practice for him. I made it a bit easier for him and we started out with one complete row (1, 5, 9). I asked questions like, "Does 2+3 plus any of those numbers equal 15?" When he responded, "No," then I pointed out that 2 and 3 could not be in a row or column together. Then we worked through the remaining pairs of numbers along those lines until logic could tell us at least one square.

Make it slightly more challenging by not telling your kids that the sum of each row/column will be 15.

Try a 4x4 magic square, known as Dürer's Magic Square. What will the sum of each row be?

If you have a super math nerd, have them learn more about the workings of magic squares.

The earliest known records of magic squares are in China and the Islamic world. The Chinese 3x3 magic square is called Lo Shu (or "river map"). According to a legend, the emperor and his court were sailing down the River Lo when a turtle appeared. The design on the turtle's back was the numbers (represented by circles) in the magic square.

This week's camp theme is computing. Solving magic squares not only requires logic and patience, kids practice their basic addition skills, adding 3 or more numbers. Head over to Coffee Cups and Crayons for an awesome and easy hands on math game.

Subscribe to our newsletter and as a thank you, receive 10 waiting games kids can play anytime anywhere.
Your email will *never* be shared or sold to a 3rd party. Click here to view our privacy policy.
« Brain Teaser: Symmetry Paper Trick
Spinning Noise Maker (Science of Sound) »
958 shares