×
You are here: Home / Parenting / Life With No TV: Why We Gave Up Television 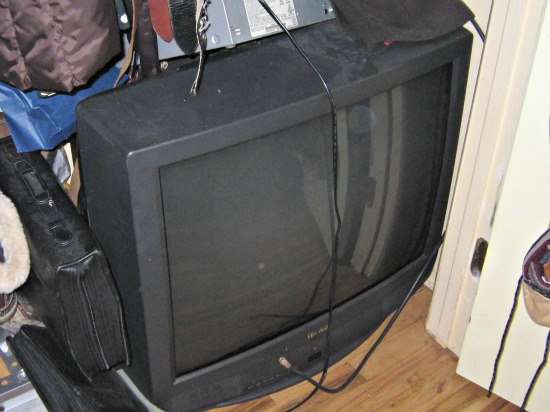 Several years ago I wrote an essay for a now-defunct online parenting magazine describing why we decided on a TV-free life and how life without television was a boon for our family and my personal sanity.  Screen-Free Week starts in a few days, so I'm republishing my essay today. The word "television" now seems so old-fashioned. After all, iPads, computers and smart phones offer ample opportunity to zone out even without an actual television.  Nevertheless, I hope my experience inspires you to the possibilities of living tv and screen-free, even if it's just for one week.  {Note: an affiliate book link is included in this post.}

Since confessing to friends and family that I unplugged and put the television away in a dark closet the responses have followed a predictable pattern:

“My spouse/kids would never let me!”

“How do you keep them busy?”

“My kids only watch [insert number of hours or minutes here] a day.”

There is the occasional, “We also love having no television!”

My husband tells me his co-workers just make fun of him.

Most of the responses have two aspects, the first is that the speaker thinks I am a snob, that in getting rid of my television I now  believe my parenting is morally superior to theirs.  In fact, I’m not at all interested in engaging in hurtful judgements over a family’s television habits. The amount of attention small children require during the day is intense, frustrating, and overwhelming. Understandably, parents jump at the chance for the effortless relief television provides. I certainly don’t feel that my parenting techniques are better than others’ just because we no longer watch television, even just the 30 minutes a day, which was my supposed, and oft-broken rule.

The second aspect of other parents’ responses is that I am going to loose just a touch more of my sanity than before, now that I don’t have TV as back-up entertainment. Well, I have news for you: I don’t have any sanity to lose, so no problems, there.

In her book, The Plug-In Drug: Television, Computers, and Family Life

Children’s hours on television admittedly are an insidious narcotic for the parent. With the tots fanned out on the floor in front of the receiver, a strange if wonderful quiet seems at hand...

Upon reading this, I realized that I was in serious danger of becoming addicted, not to my own television viewing habits (which are slight), but to my kids’. But the greater the fix I got, the greater my anxiety over what all that television viewing was doing to my kids’ brains. Oh yes, I’ve read the books and articles linking TV to poor performance in school, increased risk of ADHD, increased aggression, decreased family communication, among other dreadful, Armageddon-like complications. What I was witnessed with my own children was increased crankiness after the television, decreased interest in free play and the constant badgering to watch something.

Most importantly, however, was that I knew watching television was replacing crucial life experiences. I was worried that, as the sociologist Urie Bronfenbrenner wrote,

... turning on the television set can turn off the process that transforms children into people.

But as every addict knows, it is really hard to get rid of the drug.

The tipping point came one night when I had managed not to turn on the television, despite my husband’s late arrival coming home. The boys and I had completed a million puzzles (Yes, a million. I never exaggerate.) and the mood was relatively calm. I turned to my oldest son and said, “We didn’t watch TV, and look how much fun we had together.” He turned to me and lit up! Lit up! That was a much, much more powerful drug than tranquilizing my children in front of the TV.

The years in which my children will need my intense attention are short. In fewer than two years, they will both be in school. I’m not a parenting saint for turning off the television, I’m just trying to survive, drug-free, like everyone else. Or maybe I’ve just replaced one drug with another: human togetherness.

And in case you are curious: that photo IS our TV in the closet!

Subscribe to our newsletter and as a thank you, receive 10 waiting games kids can play anytime anywhere.
Your email will *never* be shared or sold to a 3rd party. Click here to view our privacy policy.
« Easy Poetry Activity for Kids: Spine Poems
Postage Stamp Craft: Handmade Bookmarks »