There are so many wonderful Latino and Hispanic middle grade books being published right now I had such a great time reading titles for this book list.  I was able to include a wide variety of genres: contemporary, historical fiction, fantasy and even a verse novel. In addition to the novels on this list, most of these authors have other wonderful books with charismatic Latino and Hispanic protagonists so you can double and triple your reading list! 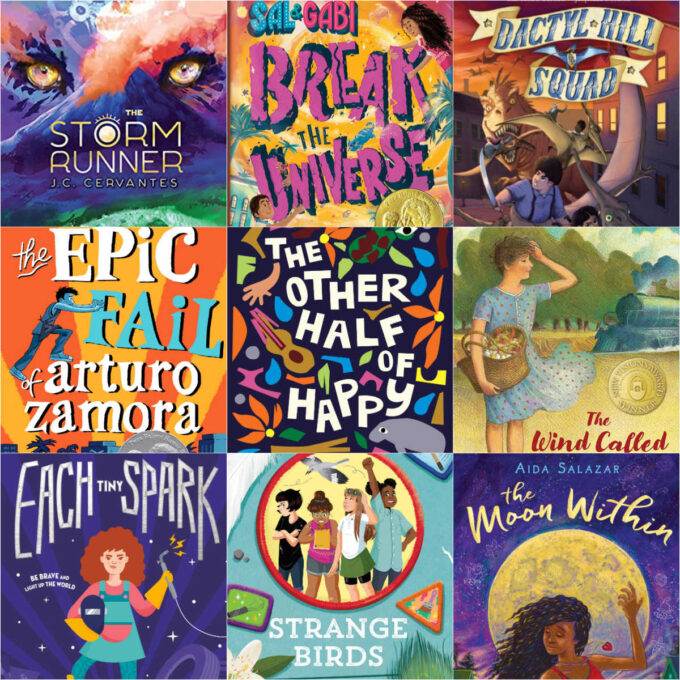 Sal and Gabi Break the Universe by Carlos Hernandez. My son listened to this on audiobook and loved it! He was alternating between gasping and laughing. Salvador Vidón is the new kid, but he is also an unusual kid because he is able to open portals into alternate universes with his mind. He meets Gabi Reál who is a bit suspicious of his explanation about the mysterious things that happen when he is around. This is a really fun book, with lots of fast-paced action and crazy humor. Highly recommended!

The Other Half of Happy by Rebecca Balcárcel. Quijana is biracial Guatemalan-Anglo and has conflicted feelings about her mixed race identity. She doesn't speak Spanish and doesn't want to go with her family on a trip to Guatemala. Instead she plans on running away to visit her maternal grandmother in Florida. A lovely coming of age story.

The Wind Called My Name by Mary Louise Sanchez. During the Great Depression, Margarita Sandoval's family farm in New Mexico is devastated by drought and her father takes a job with the railroad, moving the family to Wyoming. Her new community doesn't appreciate the Sandoval's Hispanic heritage, her father works to organize rail workers into a union and her family must prevent the loss of Abuelita's land in New Mexico. This book fills a much needed gap in children's literature by portraying the diversity of the American frontier.

Lucky Broken Girl by Ruth Behar. In the 1960s, Ruthie and her family are recent Jewish-Cuban immigrants living in New York City. After a car accident, Ruthie suffers terrible injuries and she is placed in a full body cast. Confined to bed and totally dependent on others, Ruthie's physical world narrows, but as others come to visit her, Ruthie begins to collect stories and her emotional and intellectual world expands. The author based the story on her own experiences and this is a wonderful, moving book.

The Storm Runner (series) by J.C. Cervantes. Rick Riordan Presents is a new publishers imprint that publishes fantasies based on multicultural mythology written by authors other than Riordan.  In The Storm Runner, Mayan mythology is front and center.  Thirteen year old Zane learns that the volcano in his New Mexico backyard is a actually a prison for a Mayan god. When Brooks, a mysterious shape-shifting girl shows up to help Zane fulfill his destiny, the adventure begins.

Charlie Hernández & the League of Shadows by Ryan Calejo. Charlie spent his childhood listening to his abuela's tales of Hispanic mythology. One day, in middle school Charlie experiences a strange transformation which suggests those tales weren't myths after all. He is thrown into a world which is both familiar and bizarre, and with the help of his friend, Violet, Charlie follows clues from a map in his mother's locket that takes him on a hair-raising adventure. Charlie switches fluently from English to Spanish, but the meaning will be perfectly clear to non-Spanish speaker and there is a helpful glossary of Hispanic mythology in the endnotes.

Each Tiny Spark by Pablo Cartaya. Cuban-American sixth grader Emilia has ADHD and has a lot of difficulty staying focused at school. After her father returns home from deployment, Emilia notices that he seems a bit different, moody and more distant. And the difficulties keep coming; a school assignment which illuminates social injustice threatens her oldest friendships.

The Wild Book by Margarita Engle. Fefa lives on the family farm in Cuba with her 10 siblings. A doctor tells Fefa that because of her dyslexia she will never read or write. Her mother, fortunately, is not so easily convinced. She gives Fefa a journal as a word garden in which to practice. Set in 20th century Cuba, against the backdrop of some difficult times, this verse novel is a wonderful story of a girl and her perseverance.

Strange Birds: A Field Guide to Ruffling Feathers by Celia C. Pérez. Four very different girls come together to work towards a goal. The Floras is a beauty pageant girls club and and uses a crown made of bird feathers to crown the winner. Cat, Aster, Ofelia and Lane team up to get the Floras to stop using the crown. They hit some bumps along the way and form their own club, the Ostentation of Others and Outsiders. This is a wonderfully engaging story of friendship and justice.

Dactyl Hill Squad (series) by Daniel José Older. It's 1863 and the Civil War is being fought with troops on the backs of raptors! This is a spectacular and unique historical fantasy story. When Magdalys and several friends are on a field trip, children from the orphanage where they live are kidnapped. Magdalys and the others head to the Dactyl Hill neighborhood of Brooklyn where they learn how to ride pterodactyls as part of a plan to take down the evil magistrate behind the kidnappings. Magdalys has some trouble learning how to be a team player but her skill as a dinosaur telepath (!) helps lead the group to victory.

The Moon Within by Aida Salazar. This is a remarkable, much needed tale about Celi, a girl who is learning about how her body is changing and taking her into womanhood. Celi's mother wants to have a moon ceremony when Celi has her first period, but Celi doesn't want that. At school, Celi is adjusting to her best friend Mar's own transition, from girl to "xochihuah," or non-binary. This important book explores cultural and gender identity in an engaging and contemporary story.

The Epic Fail of Arturo Zamora by Pablo Cartaya. 13 year old Arturo works part-time in his family’s Cuban restaurant. But then a sketchy land developer, Pipo, wants to buy the lot next door and convince the city to let him develop a huge project with no room for the restaurant. Arturo, with the help of his friend Carmen work to undermine Pipo’s plot. I loved the way Arturo finds inspiration to fight the good fight from the poetry of Cuban poet José Martí, as well as old letters written by his grandfather. Any teenager will laugh out loud at Arturo’s antics.

Ana María Reyes Does Not Live in a Castle by Hilda Eunice Burgos. Ana María lives in a tiny New York apartment with her three sisters and another sibling on the way. Ana María is determined to win a scholarship to a private school but that means she will have to practice the piano as much as possible, which seems all but impossible, given the amount of chaos that is going on in her family!

More books with a Latino and Hispanic focus that you will love:

Picture and Chapter Books with Latino and Hispanic Characters

Subscribe to our newsletter and as a thank you, receive 10 waiting games kids can play anytime anywhere.
Your email will *never* be shared or sold to a 3rd party. Click here to view our privacy policy.
« If You Like The Hunger Games... Read These Next!
15 Word Games for Kids and Families »
640 shares