Welcome back to Amy of Sunlit Pages who has a Katy and the Big Snow activity and play idea. This book extension activity is perfect for sensory play with your kids and a great indoor boredom buster. It takes indoor snow play with toy vehicles to a new level!

Katy and the Big Snow Activity

One of our favorite books to read during the winter months is Katy and the Big Snow by Virginia Lee Burton. Although Burton is probably more well known for The Little House and Mike Mulligan and the Steam Shovel, Katy is our personal favorite. 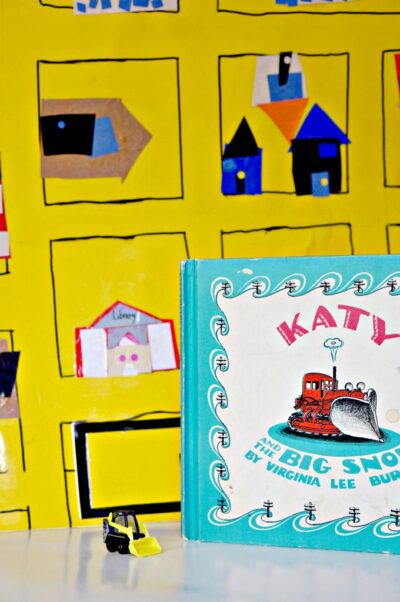 Katy is a spunky red crawler tractor. In the summer, she's a bulldozer, and in the winter, she a snowplow. Katy loves her job. In fact, "the harder and tougher the job the better she liked it."

One winter morning, snow begins to fall, and it soon becomes very apparent that the storm has no intention of stopping and that this is "the big snow." Katy is sent out to do her magic, and it's a good thing because pretty soon the entire City of Geoppolis grinds to a halt. Everything is closed and no one else can do their jobs because the roads are impassable. Katy methodically plows her way through the city until Geoppolis is running smoothly again.

One of our favorite spreads in the book is the map of Geoppolis. All of the buildings are numbered, and then, along the perimeter of the page, there's a closeup of each labeled building. It's one of those pictures you really have to stop and study for at least five minutes before moving on. 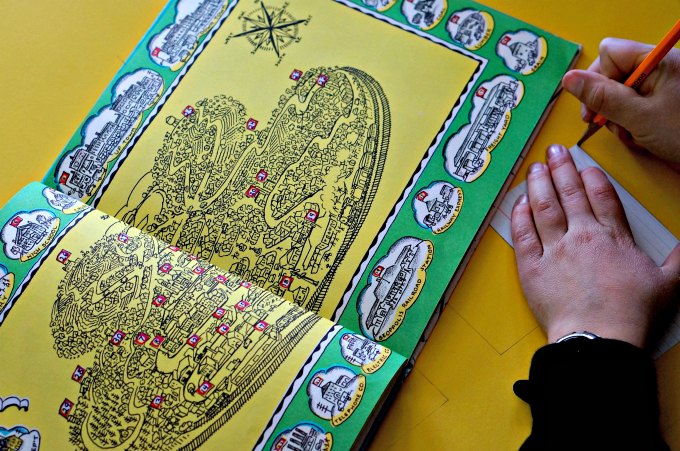 That picture was the inspiration for this fun, sensory-related extension activity. We decided to make our own city with various types of "snow" that Katy could dig her way out of.

We started with a big yellow poster board (the map of Geoppolis is yellow, so it seemed like an appropriate color). I let my 7-year-old take a straight edge and pencil and map out the roads. 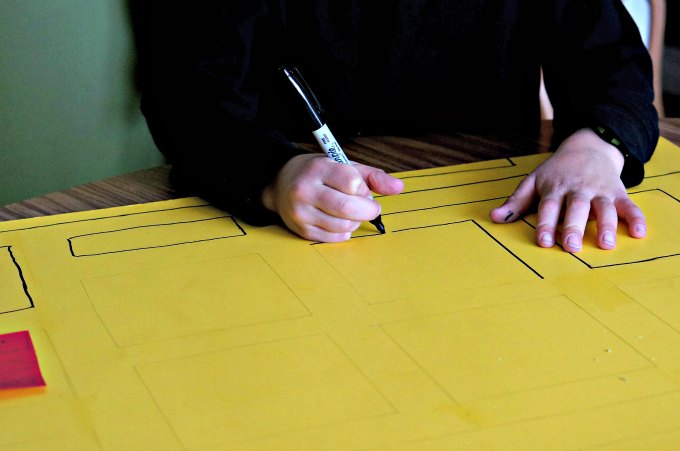 Meanwhile, my five-year-old and four-year-old began creating houses and buildings out of construction paper (and eventually, after the roads were permanently preserved in black Sharpie, the seven-year-old joined them). They made multicolored houses, apartment buildings, a fire station, a school, and a park. 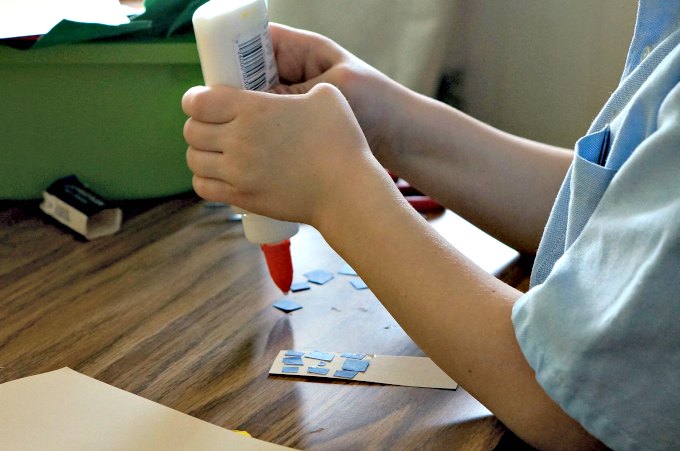 Then they arranged them in the empty squares and glued them in place.

It was then time to deliberate the name of our city. Everyone made a suggestion, and we eventually settled on Lemonopolis, chosen because of the yellow color of the roads and our wish to pay tribute to the book (although my five-year-old really wanted Amperville because we had just finished reading Ragweed aloud, and that's the name of the city in the story). 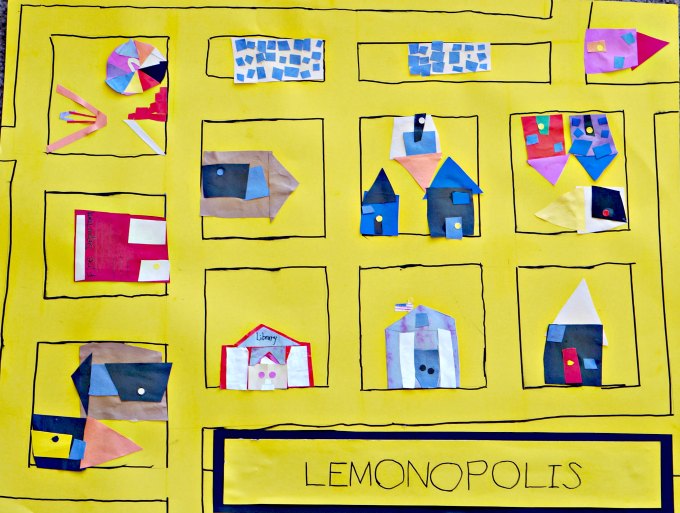 We took it to the copy store and had the whole thing laminated to protect their handiwork because things were about to get messy!

We let it "snow" on Lemonopolis, and our very own Katy came and plowed the streets. 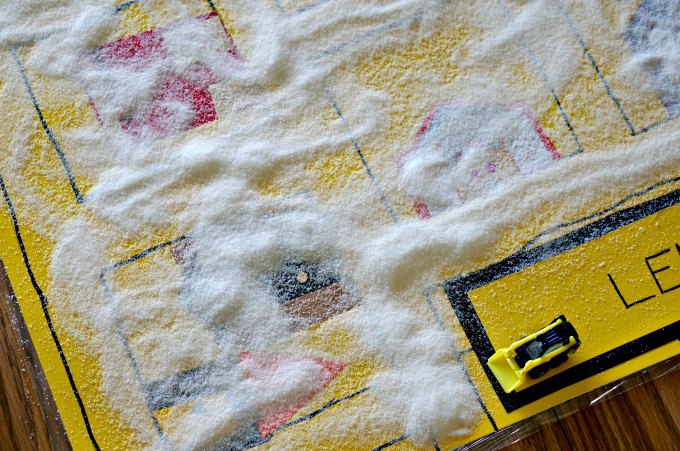 The first snowfall bore a striking resemblance to salt. It was fine and gritty and scooped up beautifully into piles. (It also drifted around the kitchen quite easily, and I was stepping on tiny grains for quite awhile after--just warning you.) 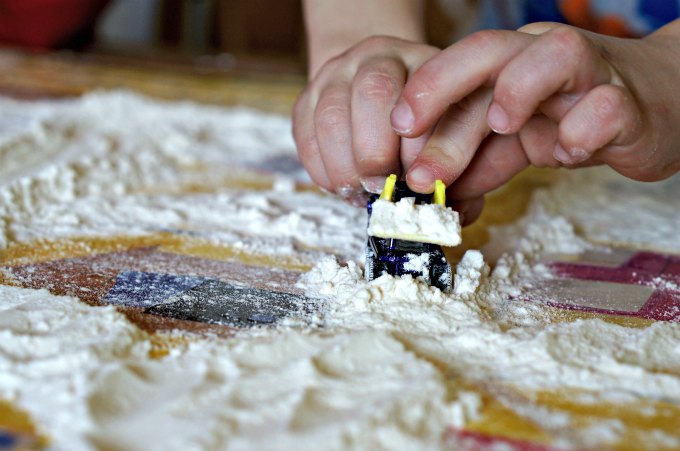 The next snowfall looked more like flour. Although we do a fair amount of baking at our house, I don't think my kids had ever really had the opportunity to touch flour. They loved it. It was soft and powdery and delightful to push around, either with their cars or their hands. By the end, they looked like little snowmen themselves. 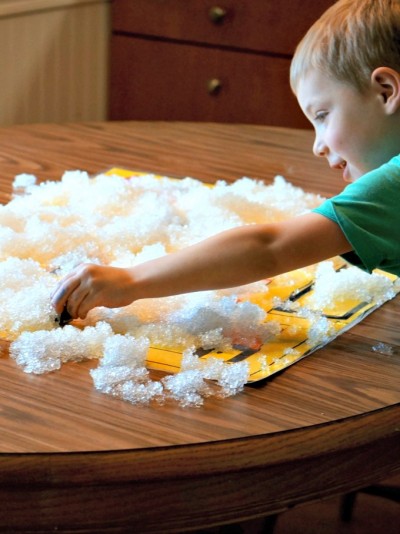 Our next storm brought in real snow, which we happened to still have sitting around in the backyard. Their playtime with it was cut a little short because it froze their hands and melted in puddles, but it felt very authentic. 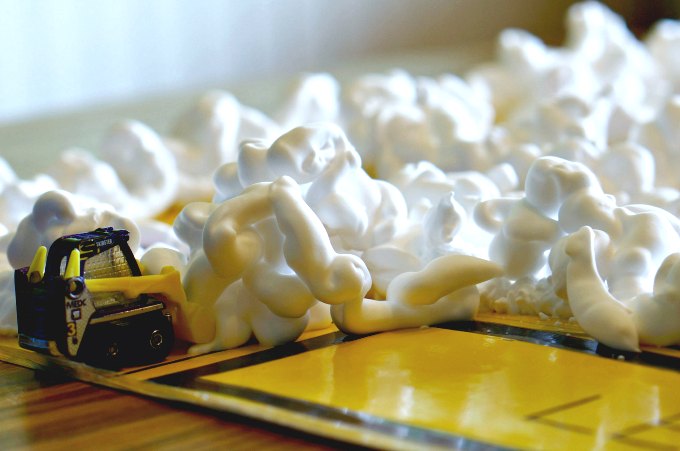 And finally, there was a shaving cream snowfall. Katy met her match with this one. It was goopy and squishy and clumped itself around her. My kids quickly abandoned her in favor of just scooping it up with their hands and smearing it around on the mat.

This has been the activity that just keeps on giving. My kids have been jointly invested in this project, exercising their creativity and making plans and playing together. The sensory experience of playing with the different types of "snow" has made the whole thing very real and tactile. It has brought the story of Katy to life for them. We just keep thinking of new elements in which to test Katy's prowess (rice next? or sand?). Instead of just helping us through one afternoon, it has gotten us through several weeks of winter.

I will admit that the thought crossed my mind several times that this would be a fun summer activity. You know, in the grass where the cleanup would be a snap. In some ways, that would defeat the purpose since it makes sense to act out a story about snow in the wintertime, but in other ways, it would be perfect. You could even just create your city with chalk on the driveway and bring in other types of disasters--maybe a mudslide or a leaf storm. The possibilities are endless.

I would love to hear about other sensory activities you've done with your kids. And also, what is your favorite book by Virginia Lee Burton?

Be sure to visit some of Amy's other posts!

Amy is an avid reader and the mother of four rambunctious boys. Her life goal is to make them as obsessed with books as she is. (Judging from the dozens of books scattered all over her house, she has been successful so far.) She blogs at Sunlit Pages where she writes about a variety of books – from what she is currently reading to her kids’ favorite picture books.