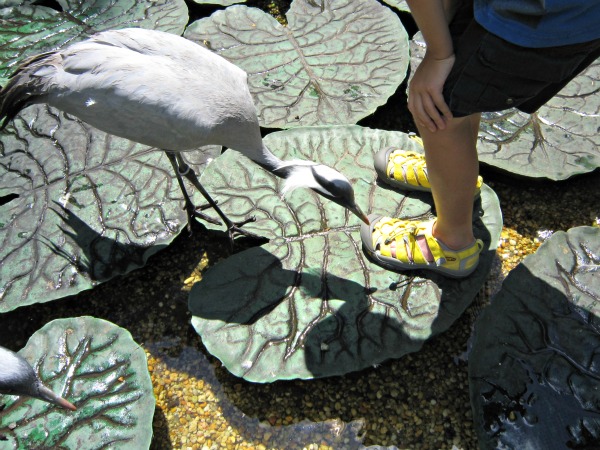 Parents with more than one kid know how important it is to have one on one time with each child individually. Life so often gets in the way and we (or at least I do) sometimes forget to stop and take time out to get to know our children as individuals, not just as a set. I find this is particularly true for my older, more serious son.

A few weeks ago I pinned a post from Here Come the Girls, titled Yes Day!, and as happens so often with Pinterest, I didn't actually read the post at first, I simply "pinned it for later." (You do that too, right?) It reminded me of the book Yes Day! by Amy Krause Rosenthal (which, as it turns out was the inspiration for Here Come the Girls's post!) in which a girl experiences one whole day of her parents saying "Yes!" to everything she wants to do.

This summer, I have been able to spend several days with just my 8 year old and primarily they are quiet days. Lots of reading, a walk to the park to birdwatch, a bowl of popcorn and a game. However, one day I decided to have a Yes! Day.

Unlike the girl in the book, however, my son was not aware it was an official "Yes Day!" I didn't make an announcement. I didn't make any grand plans. I simply said "Yes!" to everything he wanted to do.

YES to going to the Central Park Zoo.
YES to panini for lunch.
YES to buying an overpriced ink cartridge to print out his photos instead of waiting for an Amazon shipment.
YES to playing Qwirkle.
YES to riding in the first car of the train, even though the back was more convenient.
YES to soft tacos for dinner.

(I may also have said YES to a glass of wine for me.)

I didn't tell Kiddo it was a "Yes Day!" because I didn't want to my yeses to seem unusual, as if it was a special treat that we followed his lead instead of mine. (I also didn't want him to take advantage of me!) I wanted to normalize the sense of peace, the lack of conflict, and the steady rhythm of contentment. Those are all qualities that are sadly absent from a typical day when I must negotiate the minefield of sibling rivalry.

It was a great day. Instead of chasing after his brother, I could listen to Kiddo tell me all about every single bird we saw at the zoo. I could ask him questions and hear the answer. Even though he never realized what I was doing, I knew he appreciated the day. I could see it in his ease.

Even though not every day can be a "Yes Day!", the success of our time spent together is motivation enough to try and create as many little moments of YES! in each day as it comes.

Have you ever had a "Yes Day!" with your child? How did it go?

In case you are wondering about the photo.... That is a curious demoiselle crane at the Central Park Zoo who suspects Kiddo's shoelace may, in fact, be a tasty bug. After I took that photo we had to hightail it out of there because cranes are not shy creatures and they started to wonder if our legs may be delicious, too. 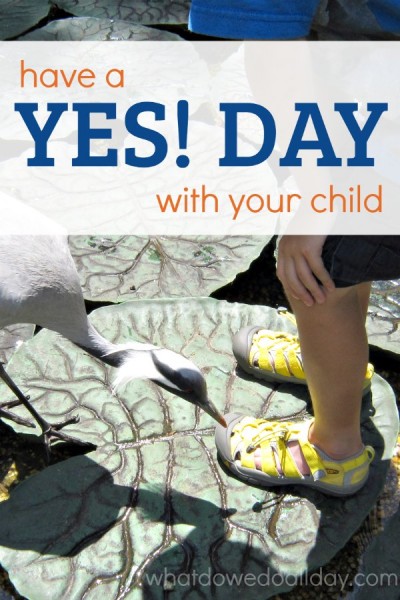 Subscribe to our newsletter and as a thank you, receive 10 waiting games kids can play anytime anywhere.
Your email will *never* be shared or sold to a 3rd party. Click here to view our privacy policy.
« Game of the Month: Tenzi
14 Latin American Folktales for Kids »
3080 shares