Is there anything more enticing than hanging out in a castle? I think not, and I bet your kids daydream about castles, too! Inspire their creative daydreams about magical adventures with these castle books for kids! This curated book list contains children's picture books, middle grade books and a selection of informative nonfiction castle books to satisfy the hidden historian and architect in all your kids. 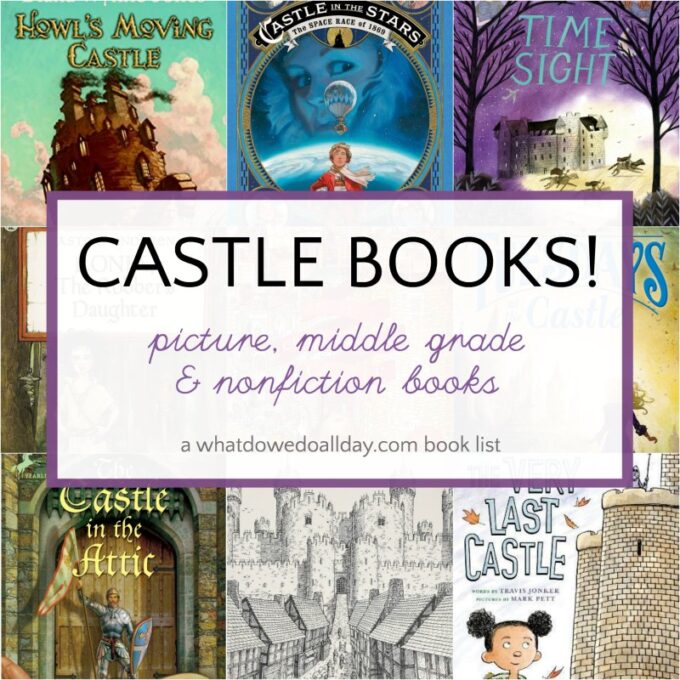 Most picture books I found with castles were really vehicles for stories about knights, princesses and dragons but I snagged a few titles in which the castle was the main feature.

The Very Last Castle by Travis Jonker. Just outside of town sits a castle but no one knows what's inside. Oh sure, the villagers speculate about monsters and giants. Ibb walks by everyday and although she musters up the courage to knock, she can't quite go inside. Until one day an invitation arrives! A guard shows Ibb around the marvels of the castle and Ibb's bravery and curiosity now serve her well as she leads the way for the village and castle to come together.

How to Code a Sandcastle by Josh Funk. Don't want to build a sandcastle the traditional way? Put on your thinking cap and figure out how to code a sandcastle with the help of technology–in the form of your trusty robot, Pascal. Pearl is annoyed that her sand creations continue to be mauled by other beach elements like dogs, frisbees and rambunctious kids. So she sets out to code a castle with Pascal. While reading about Pearl's attempts–and reattempts–to build her castle, kids learn fundamentals of coding and the process of building using small steps as part of a larger process.

Journey. This is a truly magical wordless book. A girl uses her red crayon to draw a door leading to another world. While there she visits a castle, flies into the sky and rescues a bird, all with the help of her red crayon. She is captured by an emperor but her act of kindness towards the bird comes back to her and she finds her way home. The ending will delight you and have you quickly turning back to the first page to find the clues you missed. Becker's illustrations are marvelous and worth studying. If you balk at wordless books, take a look at my parent tips for reading wordless books.

Castle Books for Ages 8 and Up

This is the largest category of castle books. I found quite a few middle grade books featuring castles as a catalyst for the plot and in a few books the castle is even the protagonist! I'm sharing my favorite titles here. Enjoy!

Time Sight by Lynne Jonell. This engaging novel takes readers to Scotland, where Will and his brother, Jamie, have been sent while their father goes to find their mother who is in some kind of unspecified difficulty. While staying with cousins at the family castle, Will discovers he has "time sight," the ability to open up doorways into time–but only on the castle grounds. The two boys and their female cousin, Nan, take the doorway and travel to several time periods including the Bronze and Iron ages, and medieval Scotland. Lots of fun and has an old fashioned feel to it.

The House of Arden, by E. Nesbit. Edred and Elfrida Arden are the heirs to Arden Castle, and just before he turns 10, Edred becomes Lord Arden, but he won't inherit the missing fortune unless he finds it before his birthday. The siblings set off on a time traveling adventure to find the treasure. Edred and Elfreda squabble like normal siblings and a grouchy magical creature, Mouldiwarp adds a quirky touch to this fun tale. One part fantasy and one part history!

Howl's Moving Castle by Diana Wynne Jones. Jones wrote loads of fantasy adventures and you might recognize the title of this one because it was made into a successful animated movie. However, it’s such a captivating book, don’t limit yourself to the film version. Young Sophie is transformed into an old woman by The Witch of Waste and the only way to break the spell is to seek out the Wizard Howl in his bizarre moving castle.

Ronia the Robber's Daughter by Astrid Lindgren. When Ronia was born, a lightening bolt split her castle home in half. Her father, Matt, is the chief of a clan of robbers. Matt's clan lives in one half of the castle and a rival clan lives in the other. Ronia becomes friends with Birk, the son of the rival chief. The two clans are not happy and Ronia and Birk run off to live in the forest where they encounter creatures of folklore. Eventually, Ronia and Birk's friendship leads the two clans to reconcile.

Castle in the Stars: The Space Race of 1869 by Alex Alice. What if someone went to space in 1869? A year ago, Claire Dulac took a hot air balloon to the very edge of the stratosphere and disappeared. Now her husband and son have clue that she may have survived. They go to see the King of Bavaria who wants to know more about aether, the substance that Claire was looking for. A little bit of steampunk and historical fantasy coupled with outstanding illustrations.

Igraine the Brave by Cornelia Funke. Igraine comes from a family of magicians, but she would much rather be a knight! In fact, she is so bad at magic, she accidentally turns her family into pigs on her birthday. Unfortunately, it coincides with the arrival of Osmund the Greedy who wants to capture the castle and steal the family's magic books. Igraine must find the ingredients for a reversal spell and hold off Osmund at the same time.

Tuesdays at the Castle by Jessica Day George begins a series about a living castle. Every Tuesday the castle adds a new feature; it could be a room, or a turret. Celia spends her time exploring and mapping the castle. Celia's brother is off at wizard school and when their parents travel for his graduation, the castle comes under attack. The castle aids Celia and two of her siblings as they try to keep the marauders at bay. The idea of a living castle is wonderful.

The Castle in the Attic by Elizabeth Winthrop.  As a child, I adored this book about a miniature castle coming to life.  William’s housekeeper, Mrs. Phillips gives him a model castle set but things go awry when Mrs. Phillips is shrunk down to the size of the castle and William must shrink himself down to rescue her. Dragons, wizards, magic forests and knights make this a wonderful fantasy quest kids will love.

Nonfiction books about castles will fill your young one's need to know facts, facts and more facts. Kids love to read nonfiction about their favorite subjects and here are three of my favorite informational castle books, plus a bonus video!

Castle by David Macaulay. Macaulay's books are always filled with incredible detail and information about his subject matter. And look! I discovered a vintage PBS special based on his book!

Stephen Biesty's Cross-Sections Castle by Richard Platt and Stephen Biesty. This book is just what the title suggests, an examination of 14th century castle life with illustrations depicting cross-sections of castles. Tons of information about the construction of castles and medieval life lie within.

Castles Magnified by David Long. This fun book comes with a magnifying glass for extra fun and acts like a seek and find book for your castle-obsessed child. It's not a substitute for a book like Macaulay's, but I love it for it's boredom busting possibilities. Each two page spread is filled with dense illustrations, a few facts and ten items that kids should look for in the drawing.