×
You are here: Home / Books / Books about Women Performers Who Dazzled the Crowds
285 shares

Know who gets left out when learning about famous artists throughout history? The performing artists! Never fear. This list of biographies of women performers will help fill that gap. The biographical picture books on this list feature women performing artists from diverse walks of life. You will see familiar names as well as women who have made important contributions to performing arts fields and who have been all but forgotten, and even some whose work was credited to men! (Shameful!) 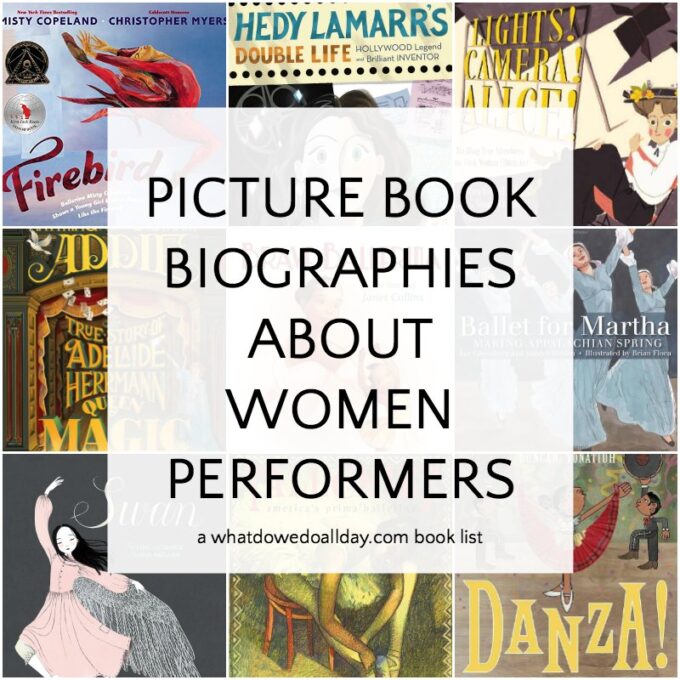 So, when discussing artists with your children, you won't forget to read about the performing artists now, right? Theatre, dance, music and other stages are just as important as artwork you hang on the wall. With a little searching on Mr. Google, you can show your children videos of these performers, too!

I have you covered though. When you want to learn about the visual arts check out the companion list: Picture book biographies of women visual artists.

Biographies of Actresses and Film Makers

Lights! Camera! Alice!: The Thrilling True Adventures of the First Woman Filmmaker by Mara Rockliff. Between 1896 and 1920, Alice Guy-Blaché made over 700 movies, but history has wrongly credited her films to men! As a girl, Alice loved stories. When the family business failed and her father died, Alice went to work at a camera company. Upon learning about a moving picture camera, Alice was eager to make moving stories. She experimented with film, running it backwards, adding color and sound. In 1907, she left France for America and built a studio in New York. Although the rise of Hollywood would mean her studio wouldn't last, Alice went on to write her own story. Watch some of her films here!

Shining Star: The Anna May Wong Story by Paula Yoo. Anna May Wong grew up helping her parents in their laundry business but dreamed of becoming a film actress. When she started getting film work she was frustrated that the only roles she could get were Chinese stereotypes, so she moved to Europe. Upon her return to the States, nothing had changed and she set to work to combat those stereotypes in film. I had never even heart of Wong and I have a PhD in theater! What a fascinating and important story.

Just Being Audrey by Margaret Cardillo. This book begins with Audrey's desire to become a dancer and  the struggles she endured during the war. The narrative takes us through her growth into a figure of elegance and her work with UNICEF. Throughout the book, the author emphasizes how Audrey grew up encouraged to be kind to others.

Hedy Lamarr's Double Life: Hollywood Legend and Brilliant Inventor by Laurie Wallmark. I've put this in as a placeholder because I am still anxiously awaiting a library copy of this new book. I will update with a review blurb when I can but I am really excited to read it!

Ballet for Martha: Making Appalachian Spring by Jan Greenberg and Sandra Jordan. This is not necessarily a biography of Martha Graham's life, arguably the most important figure in modern dance, but the story of how her seminal dance performance of Appalachian Spring came to life. Appalachian Spring was a 1944 dance collaboration between Graham, composer Aaron Copeland and set designer Isamu Noguchi and the story here focuses on that collaboration and how the elements of the performance came together. The illustrations are gorgeous and this is a important book to demonstrate to children how performance is the result of people working together. Watch the Martha Graham company perform!

Firebird by Misty Copeland. In this gorgeous autobiographical picture book, Copeland writes poetically about her feelings as an ordinary girl struggling with self-acceptance but who has dreams of becoming a prima ballerina. Myers's illustrations are absolutely stunning.

Swan: The Life and Dance of Anna Pavlova by Laurel Snyder is an exquisitely illustrated book about the famed Russian ballerina. Anna grew up being told that her body was not right for ballet, but she persevered, believing that ballet was for everyone and brought beauty to the world with a new, dramatic and romantic style of dance. This is a marvelous story but with a bit of heartbreak. An endnote gives more information on Anna's life.

Danza!: Amalia Hernández and Mexico's Folkloric Ballet by Duncan Tonatiuh. This is a great book to read to kids alongside books that feature traditional European-style ballerinas. Amalia Hernández always knew she would be a dancer and she studied a variety of dance forms. She traveled all over Mexico, learning traditional dances of each region. She then formed El Ballet Folklórico de México, which combined ballet with these folk dances. Tonatiuh's illustrative style, which evokes Mixtec artwork, is perfect for this picture book biography of an important performer. If you are lucky, you might catch some the company's next performance!

Tallchief: America’s Prima Ballerina by Maria Tallchief and Rosemary Wells. This is the story of an important figure in dance who is probably unknown to most of us. Narrated by Maria Tallchief herself, she begins by describing her childhood on the Osage reservation. With the encouragement of her mother, she grew up with a fierce love of music and dance and the family moved to Los Angeles so Maria could continue her training. This biography focuses on Maria's formative years and the book ends when she joins the Ballets Russes de Monte Carlo at the age of 17.

Brave Ballerina: The Story of Janet Collins by Michelle Meadows. Unlike many picture book biographies, this book is not text heavy, and as such is suitable even for preschoolers. Short rhyming text tells the story of Janet Collins, the first black prima ballerina to perform at the Metropolitan Opera House. The book begins with Collins as a very young girl who loved to dance with the swoosh of the trees and the focus is on the joy and beauty of dance. This is great fun to read aloud.

Anything But Ordinary Addie: The True Story of Adelaide Herrmann, Queen of Magic by Mara Rockliff. Adelaide loved performing and began her career as a dancer. After marrying the magician, Herrmann the Great, she joined his show, performing all sorts of crazy stunts. When her husband died, Adelaide carried on, becoming the star of the show. The splendid illustrations and creative use of font mirror the boisterous magic of the tale. Kids will certainly want to try a few magic tricks after reading this, only don't let them climb into any canons!

Mermaid Queen: The Spectacular True Story Of Annette Kellerman, Who Swam Her Way To Fame, Fortune & Swimsuit History! by Shana Corey. Annette Kellerman had difficulty walking as a child so her father encouraged her to start swimming as a way to strengthen her legs. At a time when women were not permitted on the competitive swimming scene, Kellerman started developing a more artistic form of swimming that we would think of as water ballet. She performed her swimming, diving feats and aqua-acrobatics to adoring crowds and always pushed herself to do more and do better. This book about a little known heroine is great fun.

Biographies of Musicians and Singers

There are many, many picture book biographies of female musicians and singers on the shelves. I've include a limited sampling here because they really deserve their own list (which is forthcoming).

When Marian Sang: The True Recital of Marian Anderson is written and illustrated by a stellar team: Pam Muñoz Ryan and Brian Selznick.  Contralto Marian Anderson found true acceptance first in Europe because Americans were unwilling to accept a black woman on the stage. When the DAR refused to allow her to perform at Constitution Hall, Eleanor Roosevelt arranged for her to sing at the Lincoln Memorial in 1939. (Watch a video of that performance here.) Like all the other women on this list, Anderson had to overcome strong barriers to achieve her success. Ryan skillfully recounts Anderson's life as a singer and civil rights activist and captures the emotional ups and downs of Anderson's journey. Selznick's illustrations shine. An extensive author's note is included.

My Name is Celia/Me llamo Celia: The Life of Celia Cruz/la vida de Celia Cruz by Monica Brown. This lively, vibrant bilingual biography tells the story of Cuban-born Celia Cruz, an important salsa singer and performer. The narrative traces Celia's journey, starting with her love of music and through her experience as a refugee escaping the communist regime in Cuba. She brought her musical art to Miami and New York, fighting racial stereotypes and never giving up. The text evokes the rhythm of salsa music and is great fun to read.

Subscribe to our newsletter and as a thank you, receive 10 waiting games kids can play anytime anywhere.
Your email will *never* be shared or sold to a 3rd party. Click here to view our privacy policy.
« 9 DIY Bookmarks for Kids: Never Lose Your Place Again!
Picture Book Biographies of Women Artists: The Visual Arts »
285 shares