What is citizenship? Is it the ability to vote? Does it mean having the right documents? Is being a citizen about being part of a community? And what does it mean to be a good citizen, a responsible citizen? These picture books that teach about citizenship will help you and your children discuss these questions. 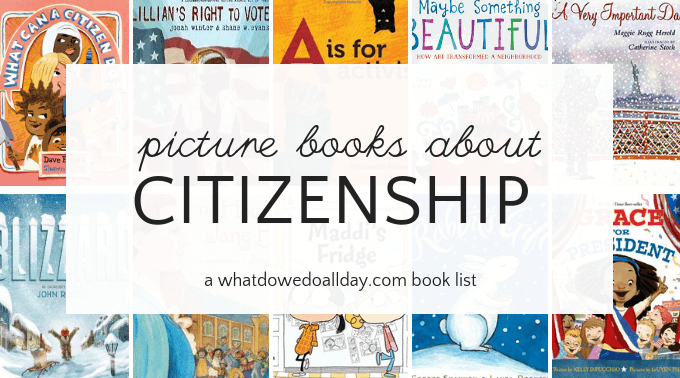 Because answering the question "what is a good citizen" is no simple feat for a single picture book, I've divided this list into several categories. I start out with a simple, general book and then move into topics such as national identity, building strong communities as well as voting and elections.

I think that one of the reasons nations become divided is that they fail to become active, positive citizens with a deep understanding how communities are built and sustained. I hope that reading these picture books that teach kids about responsible citizenship will help you raise future generations of humans who try to make a positive impact on the world! (Note: book covers and titles are affiliate links.)

What Can a Citizen Do? by Dave Eggers. This is a book to use to start a conversation about citizenship. It touches on a lot of concerns, like how being a citizen means staying engaged and being part a larger community. However, it is only a starting point for it stays on the surface and doesn't really address the complexity surrounding citizenship in this country.

Although citizenship is more than simply what nation you are from, that is, of course, a crucial element. Use these books to discuss how a group of people come together to form a nation of citizens.

Her Right Foot by Dave Eggers. This marvelous book begins in France with the origin of the idea for the Statue of Liberty. It chronicles its creation and transportation to New York. Then, the author focuses on the right foot of Lady Liberty. There's a small but crucial detail in its construction. Use this book to talk about how the United States as it is now could not exist without immigration, and will falter without a continuing, robust immigration of all different kinds of people. Lady Liberty, by her right foot, tells us that our nation's citizens are dependent on immigration. An exceptionally well-crafted book.

A Very Important Day by Maggie Rugg Herold. This book captures the excitement that surrounds the ceremony of becoming an official citizen of a nation. The story follows families from twelve different countries as they get ready for their "very important day." As the families make their ways through the snowy streets of New York City, many of them comment on the novelty of snow, others are greeted and congratulated by their neighbors. Some stop for a meal, others have their photos taken by strangers. At the end, they all gather in the large courtroom and are sworn in. An informational endnote concludes this uplifting picture book about citizenship.

Books about Helping Others

I think most people would agree that being a first class citizen means taking care of others, our neighbors, especially. These books demonstrates different ways children can be good citizens by taking responsibility to help others and show kindness. 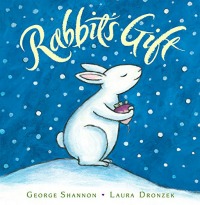 Rabbit’s Gift by George Shannon is a gentle Chinese folktale about giving to others. Rabbit finds a turnip in the snow, but as he is eating it, he thinks of his friend, Donkey, and wonders if she has any food. Rabbit leaves her extra turnip at Donkey’s door and when Donkey finds it, she leaves it for her neighbor, Goat.  On and on it goes, with each friend, in turn, considering the well being of another. Eventually, they all come together for a meal in friendship. A wonderful story.

Maddi's Fridge by Lois Brandt, illustrated by Vin Vogel. Sofia and Maddi play after school but when the girls go to Maddi's apartment and the hungry Sofia looks for a snack she is surprised to find an almost empty fridge. Maddi makes Sofia promise not to tell anyone that her mom does not have enough money for the grocery store. Sofia worries about what to do, and ultimately makes the right decision. I like how this book emphasizes community, as well as kindness towards individuals. 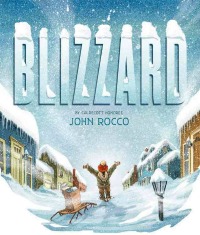 Blizzard by John Rocco. In 1978, a blizzard dumped fifty-three inches of snow on the author’s town in Rhode Island. This story is based on his experience. First the protagonist is excited for the snow, but then as it keeps falling, the danger of his family and neighbors being stranded without food becomes very real. The young boy rises to the occasion and straps rackets to his feet to make his way to the store. 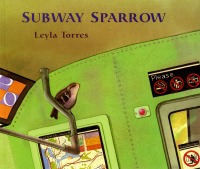 The Subway Sparrow by Leyla Torres. When a sparrow is trapped on a subway train, a group of diverse individuals work together to capture and release the frightened bird. Even though the subway riders don’t all speak the same language, their desire to cooperate for the greater good overcomes their differences.

Books about Elections and Voting

A list of children's books to teach citizenship wouldn't be complete without a few books that touch on voting rights and how elections work. The meaning of citizenship cannot be divorced from history and I encourage you to discuss how people transformed the process of voting and elections over time. 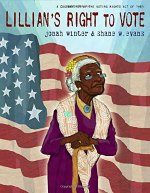 Lillian’s Right to Vote: A Celebration of the Voting Rights Act of 1965 by Jonah Winter. The elderly Lillian climbs a hill to vote for the first time. As she climbs she recalls the history of her family and African-Americans in her country and all it took to get to this point. Teaching your children about the responsibilities of citizenship necessarily includes a discussion about the necessity, and history of, voting rights - both the good and the ugly.

Grace for President by Kelly DiPucchio. When Grace finds out there has never been a female president, she is determined to change that. While the boy she is up against makes popular promises and counts electoral votes, Grace works hard and steadily to earn her votes and show with her actions that she’s the right girl for the job. The explanation of how electoral votes are cast is skillfully woven into the narrative, making this a great choice for discussions around election time.

Elizabeth Started All the Trouble by Doreen Rappaport, illustrated by Matt Faulkner.  The book starts with a sort of prologue starring Abigail Adams who issues a warning to her husband that if women were not included in the new laws for the United States they would start their own revolution. The story then skips ahead to 1840 when Elizabeth Cady Stanton and Lucretia Mott start that very revolution. I appreciated that the author included the voice of Sojourner Truth in the middle of the book because it is important to remember that Cady Stanton and the other suffragettes were fighting for the white woman's right to vote.

Books about Improving Your Community

To teach your children that being a citizen involves more than an official document, share with them all the ways they can be active agents of positive change. These books that teach citizenship include descriptions protesting what is wrong and working towards what is right.

A is for Activist. With a fun sense of humor, this alphabet book introduces kids to the idea that life may not be all about acquiring the latest Thomas Train. I was worried this book would be annoyingly didactic, but the rhymes and wit make this introduction to social justice a worthwhile read. The book teaches generosity, compassion, consideration for others. Use the book as a starting point for further discussions about the topics.

The Tree Lady: The True Story of How One Tree-Loving Woman Changed a City Forever by H. Joseph Hopkins. As a city dweller, I am particularly fond of tree huggers, especially those that see the value of trees and plant life in urban settings. Katherine Olivia Sessions was the first woman to graduate from the University of California with a degree in science. After moving to a nearly tree-less city in San Diego, she advocated and spearheaded a campaign that transformed the area to a lush green land. I hope Sessions's story inspires other kids to make a difference in their community.

Maybe Something Beautiful by F. Isabel Campoy and Theresa Howell This book is based on a true story. Mira wants to brighten up her grey neighborhood. She starts out small by handing out her colorful illustrations to neighbors. Inspired by Mira the community gets together  transform their environment with colorful murals. This kind of community improvement activity is just the sort of thing that kids can participate in! I love the vibrant illustrations and the message that art makes life better.

The House That Jane Built: A Story About Jane Addams by Tanya Lee Stone. This is an inspiring story about Jane Addams, the first American woman to be awarded a Nobel Peace Prize, who founded a settlement home known as Hill House (still in existence!) in Chicago in the late 19th century. Addams was born into a wealthy family, but from childhood she wanted to help the poor in her community. The narration effectively draws readers into the story by portraying the unique individuals impacted by Addams' work as well as the larger importance of her work. A great talking point when reading this book to children is how projects such as Hull House contributed to the rise of community centers and what kinds of benefits they have for citizens. 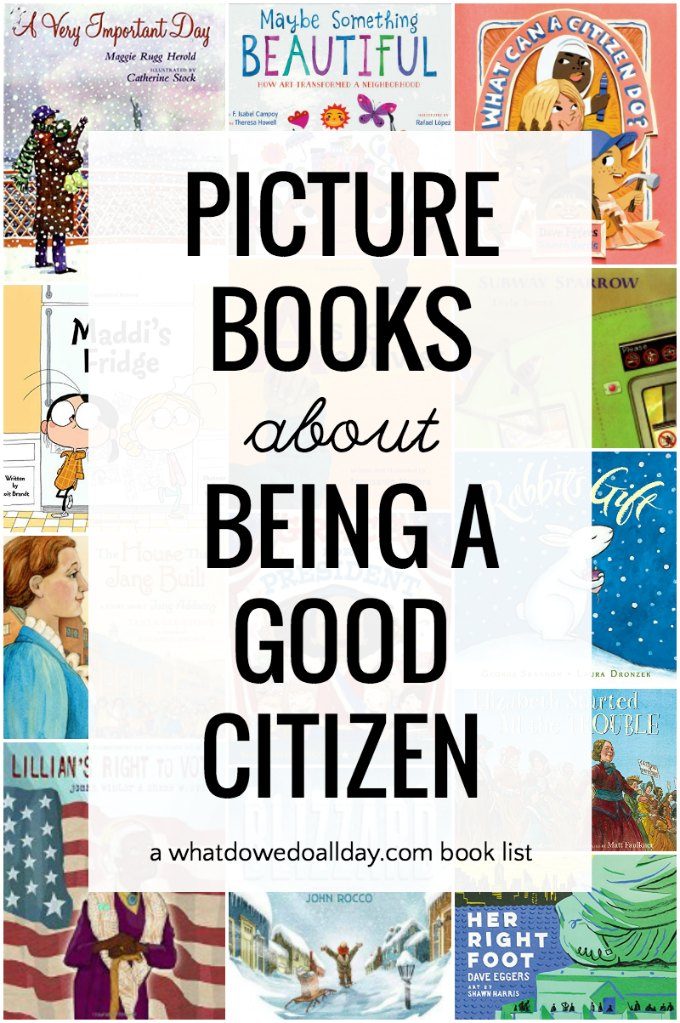