We all want to know the secret to helping our children realize their dreams. While I can't pretend to have the key to help you with that, I can offer you a list of books which may inspire your kids to follow their dreams and passions. These are all picture book biographies about people who never gave up, who went after their dreams, even when they might have seemed impossible to others. Some of them faced hardships our own children will probably never experience (hopefully), yet they persevered. 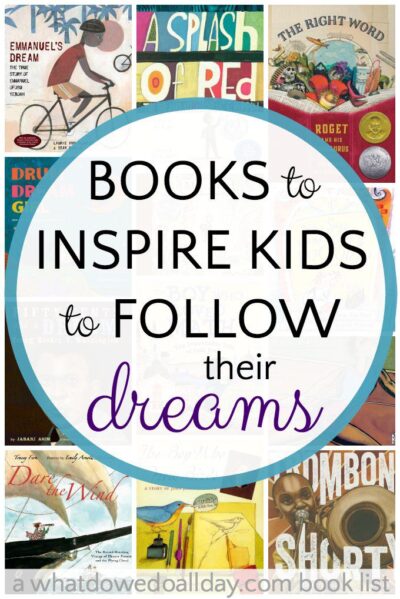 Think of this picture book list as a companion to my list of books to inspire kids to change the world, because by following their passions and pursuing their dreams they may end up doing just that. The men and women depicted in these books come from all walks of life and their stories span the centuries. Let them inspire you, too.  (Note: covers and titles are affiliate links.)

Emmanuel's Dream: The True Story of Emmanuel Ofosu Yeboah. I read this book a few nights ago to my son and it is the book that inspired me to make this list. Emmanuel was born in Ghana with only one leg. Most children with disabilities didn't go to school, but Emanuel was determined and hopped two miles each way to attend school. After his mother died, he decided to honor her last words by proving "that being disabled does not mean being unable." He completed the astounding feat of bicycling 400 miles in 10 days. To say the least, Emmanuel's is an inspiring story, and Thompson and Qualls do great justice to his accomplishments. An author's note describes his continuing work and successes on behalf of disabled persons in Ghana.

Drum Dream Girl: How One Girl's Courage Changed Music. Strictly speaking, this is not classified as a biography. Rather, it is inspired by the life of Millo Castro Zaldarriaga, a Chinese-African-Cuban girl. Millo bucked Cuba's taboo against female drummers and became a famous musician, even playing the bongos at a birthday celebration for FDR. The book is written as a poem, following a girl's longing to beat on all sorts of drums: congas, bongos, and timbales. She practices secretly until finally she is allowed to share her gift with the world. Rafael López's illustrations are absolutely stunning.

A Splash of Red: The Life and Art of Horace Pippin. Horace Pippin, who I'd never heard of before reading this picture book, was a self-taught painter. He was shot in the arm during WWI, but he worked steadily to learn how to use his arm again to create art. There are so many things I love about this book, and you come away from it with a strong sense of how Pippin used art to interpret the world. Pippin suffered from poverty, the psychological and physical costs of war, but still, his talent propelled him to create. One interesting note is that Pippin was African-American, but the author makes the bold  choice to not even mention that. Winner of the Schneider Family Book Award (plus many others).

Who Says Women Can't Be Doctors?: The Story of Elizabeth Blackwell. This great book brings to life a woman who persistently followed her goals and broke 19th century barriers to be allowed into medical school, faced the rejection of her fellow students and then her colleagues, all the while proving she was smarter than they were. I love the vibrant, energetic illustrations.

The Boy Who Drew Birds: A Story of John James Audubon. I am including this book in honor of my oldest son who wants to be an ornithologist. John James could do a lot of things, but what he loved to do best was watch birds from morning till night. Born in France, his father sent him to America when he was eighteen, where -- predictably -- he obsessed over birds. Davies describes how Audubon relentlessly observed the habits of birds, making important discoveries about migration. Kids can learn a lot from Audubon's patience, determination and passion for learning.

Dare the Wind: The Record-breaking Voyage of Eleanor Prentiss and the Flying Cloud. In the 19th century, women did not navigate ships, but Ellen's father saw his daughter's love of the sea and nurtured it. She grew up, married a sea captain and accompanied him on his merchant voyages. In 1851 the Flying Cloud, in large part due to the navigational skills of Ellen, sailed around Cape Horn from New York to San Francisco in a record-breaking 89 days, 21 hours. Both the text and the illustrations will make your child feel as though he is there, on the sea, with Ellen and the clipper.

MORE: Every Monday I have a new booklist. Sign up so you don't miss any.

Fifty Cents and a Dream: Young Booker T. Washington. Asim tells Washington's story in beautiful free verse. Born a slave, Washington was determined to get an education and after emancipation walked 500 miles with a dream of earning a college degree. Washington's persistence to learn is inspiring and doubly so when considering the hardships, hate and obstacles he faced. Collier's illustrations are absolutely gorgeous.

The Right Word: Roget and His Thesaurus. When someone says "inspiring people" you might not immediately think of Peter Roget (or at all), but this boy who loved to make lists and had a passion for words grew up to be not just an accomplished doctor, but an inventor and the man whose name now graces the shelves of every serious wordsmith. The book shows us that you can be a quiet person, but with passion and a love for learning and thinking and tinkering, you can follow your dreams and achieve much. Lovely, lovely artwork by Melissa Sweet and an interesting historical note make this a must read book.

The Boy Who Loved Math: The Improbable Life of Paul Erdos. A picture book biography of a successful mathematician is a great way to inspire your kids who may not otherwise be inspired by the usual sports and adventure type heroes. (Not that math and adventure loving kids are mutually exclusive! Don't send me a grouchy email!) I confess, I did not know who Paul Erdös was before I read this book. Paul Erdös was an eccentric, but very sociable mathematician who traveled the world spreading and sharing his love of numbers. Heiligman does a great job of integrating math concepts into the writing and the end notes include some historical background and mathematical explanations.

Jim Thorpe's Bright Path. For a while my son wanted me to read this book over and over to him. This picture book biography does leave out a lot about Jim Thorpe's life, but the inspiring stuff is there all right. Thorpe was a Native American who had a difficult childhood. His parents and brother all died and he was sent to an Indian boarding school. These boarding schools were not happy places by any stretch of the imagination and the students were expected to enter society as servants  and manual laborers. Thorpe avoided this bleak prospect to become one of the greatest athletes of all time.

Sonia Sotomayor: A Judge Grows in the Bronx / La juez que crecio en el Bronx. This is a wonderful book if you are looking for a picture book biography about a contemporary Hispanic-American figure (or any inspiring public figure). Supreme Court Justice Sonia Sotomayor's story will inspire everyone. The book follows Sonia as she grows up in poverty in the Bronx and gets an education. The book has a great, positive message and emphasizes how important it is to be surrounded by supportive friends and family.

Me . . . Jane. Jane Goodall's childhood is full of dreams. She spends her days out in the natural world and dreams of helping and living with animals. As she grows up she moves from butterflies to small animals and finally to the chimps for which she is so famous. I particularly like the way McDonnell juxtaposes photographs of Jane Goodall with his illustrations, capturing Jane's hopes in both her childhood dreams and her eventual realization of those dreams.

Wilma Unlimited: How Wilma Rudolph Became the World's Fastest Woman. Wilma grew from a 4 pound baby to be one of the fastest women in the world and competing at the Olympics. This is amazing, considering that after a childhood bout with polio, it was thought that her leg was permanently damaged. Wilma worked through her injury as a young girl, earned an athletic scholarship and won three Olympic gold medals. My kids were fascinated with the idea that she won her medals even though she had a twisted ankle!

Trombone Shorty. Troy Andrews wrote this autobiographical picture book about how he grew up in a music-rich environment and when he found a broken instrument he started playing the trombone, he earned the nickname, Trombone Shorty. He played and practiced hard and grew up to be a Grammy nominated multi-instrumentalist.

There are many, many stories and books out there that will encourage and inspire kids to pursue their dreams. I certainly can't include them all here! What inspiring picture book biographies would you recommend?

Want more books like this? These lists will also be helpful:

Subscribe to our newsletter and as a thank you, receive 10 waiting games kids can play anytime anywhere.
Your email will *never* be shared or sold to a 3rd party. Click here to view our privacy policy.
« Science Craft for Kids: Milk Carton Candles
Brain Teaser for Kids: Math Cube Riddle »
13471 shares